“And I wish you all the love in the world, but most of all, I wish it from myself.”

That is the hauntingly beautiful lyric that, for me, punctuates one of the most profound and moving ballads in rock history, Fleetwood Mac’s “Songbird.”

Amazingly, the entire song was written in less than half an hour by the band’s consummate keyboardist and vocalist, Christine McVie. Last week, on Nov. 30, the singer and songwriter died following what her family said was a “short illness.” She was 79.

When I heard of McVie’s death, I was unexpectedly and intensely saddened. I mean, in recent years I hadn’t really thought too much about Fleetwood Mac, or McVie, although I came of age as a young man listening to the iconic 1977 “Rumours” album, which still is one of the best-selling and most-beloved recordings of all time. In fact, in 2018, “Rumours” was selected for preservation in the National Recording Registry, being deemed “culturally, historically, or artistically significant” by the Library of Congress.

Yet for me the sense of sadness had nothing to do with cultural significance, but rather, from a sense of loss that yet another voice that moved and shaped my world is now gone. It’s a similar sense of loss that I felt nearly three years ago, when I learned of the death of RUSH drummer and lyricist Neil Peart.

Now, unlike Peart, I never had the chance to meet Christine McVie. In fact, I’ve never been to a Fleetwood Mac concert. My only real experience with the band is through their art, and my only connection with McVie is through her emotionally layered vocals, her affectionate, thoughtful, and direct lyrical messages on love, loss and relationships, and through her impeccable sense of melody. 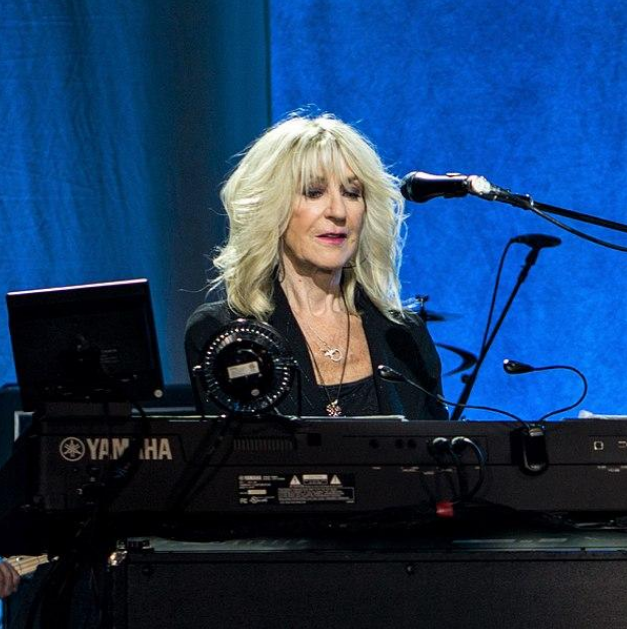 Christine McVie doing what she did best, connecting with the world via song.

All of those brilliant songwriting characteristics are on full display in “Songbird,” and despite having listened to this track for some four-and-a-half decades, it still moves my soul each time I hear it with its captivating piano progression (written in the key of F for all of my fellow musicians) and heartfelt message that “the songbirds keep singing like they know the score, and I love you, I love you, I love you, like never before.”

For more detail on the musical side of what makes “Songbird” and McVie’s work so great, check out this analysis from producer, musician and educator Rick Beato.

As I processed the news of McVie’s death, I felt the bittersweet taste that news like this leaves on one’s mental palate. The bitterness is that all of us will cease to be, and everyone that matters to us will one day be gone.

The sweetness is that the memories of those past, and what they did while they were here, cannot be taken from us. This is especially true in the case of McVie because we have a direct link to her spirit virtually any time we want it, and that is through her recorded music.

Finally, McVie’s death served as a reminder to me that what matters most in this world is to do something beautiful with our limited time.

That beauty can take many forms. It can come from our efforts at productive achievement, from our interactions with others or from our efforts to make the world just a little bit better than it is right now.

Today, I dedicate this issue of The Deep Woods to what matters most in this world… doing something beautiful.

And for being one of so many illustrious examples of how one does just that, I want to thank Christine McVie in the best way I know how to create beauty in the world, and that is through my writing.

One of the most contentious questions in investing is whether small-cap stocks or large-cap stocks are a better investment to secure your financial future.

Adherents of the large-cap-stocks-are-better theory point to research by JennisonDryden, indicating that investors are quicker to flee small-cap stocks for more stable large-cap stocks at the first sign of economic trouble. There does appear to be empirical support for this position in the current market.

That doesn’t mean, however, that we should throw small-cap stocks out with the proverbial bathwater. At the same time, the same report by JennisonDyrden mentions that small-cap stocks are often the first to bounce back during an economic recovery. This is at least partially because small-cap companies can shift physical and economic resources more rapidly than a large corporation and thus react more quickly to economic changes.

RWJ invests in securities that make up the S&P SmallCap 600. Then, unlike many of its fellow small-cap ETFs, RWJ sets up its portfolio by looking at each stock’s fundamentals and then weighting them by top-line revenue. This difference from its competitors is likely due to the S&P SmallCap 600 already screening its stocks for size, liquidity and financial viability. The index then weights its securities by revenue, with higher revenues leading to a heavier weight. 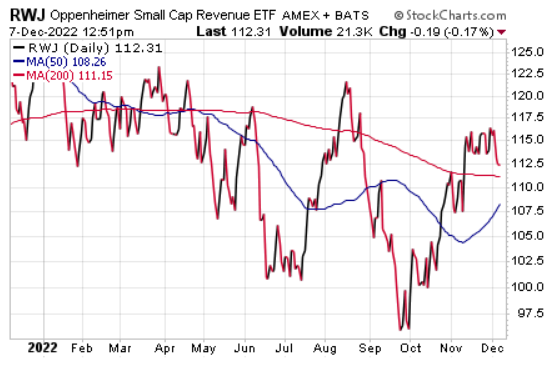 The fund has amassed $970.84 million in assets under management and has an expense ratio of 0.39%.

While RWJ does provide an investor with a way to invest in small-cap stocks, this kind of ETF may not be appropriate for all portfolios. Thus, interested investors always should conduct their due diligence and decide whether the fund is suitable for their investing goals.

You know about “Black Friday” and “Cyber Monday,” which this year set records for consumer buying. But did you know that yesterday was “Giving Tuesday?” That’s right, a day dedicated to remembering that charitable contributions are both a gift to others and a huge psychic present to yourself.

Indeed, Giving Tuesday ushers in what’s come to be known as the giving season, and it is called the giving season for good reason. You see, it’s estimated that about 30% of annual donations occur between Thanksgiving and the start of the new year, with the majority of those gifts being sent in the final three days of the year.

This year, I’m proud to say that I have donated more to charity than any other year in my life, and part of the reason why I have been able to do so is due to the success of my newsletter advisory services. You see, the more money you make for your subscribers, the more subscriptions you sell and the more renewals you get.

Now, in addition to the increased amount of money I am able to donate to the charities of my choice, more personal income and more investment success also mean more “units of choice.”

I’ve written about the concepts of “units of choice” before in this publication, because it’s a great way to look at the role of money in our lives. You see, the more capital we have, the more things we can do with that capital. More importantly, we can do more with the limited time that we all have.

This year, I spent a lot of my “units of choice” doing things that matter to me and donating to the charities that matter to me. For example, this year, I donated one of my horses to a charity that provides assistance to children with disabilities. Witnessing the interaction between a well-trained horse and an excited child who gets to ride that horse for the first time leaves an indelibly loving impression on one’s soul.

I also spent some time at charity events for my favorite veterans’ organization, Friends of Freedom. This group was started by my friend and fellow Renaissance Man David Haddad, who has been a guest on my podcast. Under David’s expert stewardship, Friends of Freedom has delivered over 750,000 cigars for troops to enjoy in war zones in Iraq and Afghanistan. 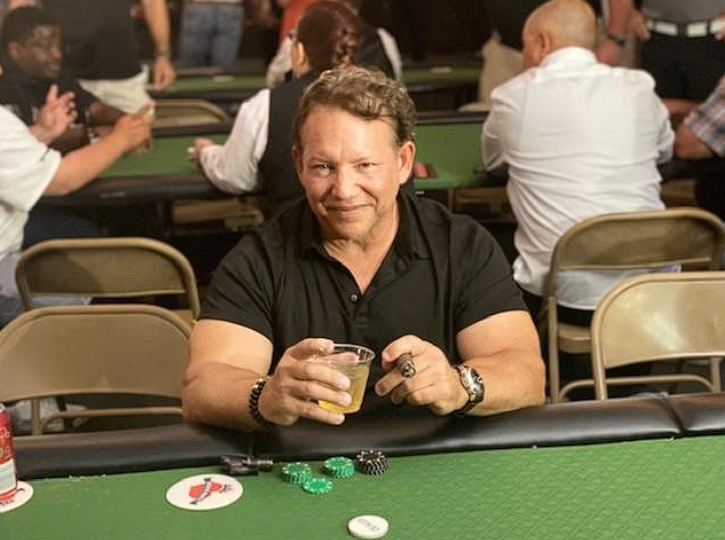 Your editor playing in the annual Friends of Freedom charity poker event.

Friends of Freedom also helps veterans by assisting them with rent, utilities, car repairs, the transition to civilian life and more. If you’ve looking for a charity to support with veterans in mind, then choose Friends of Freedom.

Another charity event that I attended last year was sponsored by the iconic heavy metal band Metallica. I was there for the band’s epic 40th anniversary takeover of its home city of San Francisco, where the performers played two incredible sold-out shows at the 18,000-seat Chase Center. 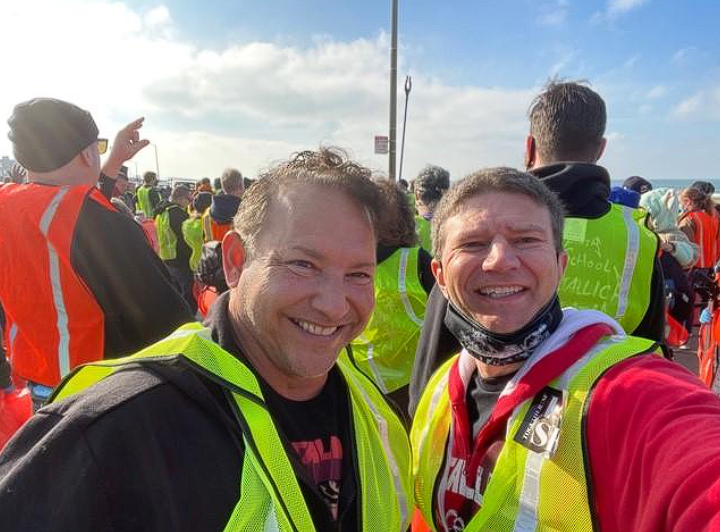 Your editor, alongside Eagle Financial Publisher Roger Michalski, rocking out and doing a charity beach clean-up in San Francisco.

I also had the privilege of doing an early morning beach clean-up alongside hundreds of other Metallica fans, including my Eagle Financial Publications colleague Roger Michalski, who is arguably one of the band’s biggest fans.

This event was sponsored by Metallica’s charity, All Within My Hands, which helps raise money for a cross-section of national and local charities. Importantly, every penny of the donations received by All Within My Hands goes directly to the organization’s charity partners.

I must say that it felt great to be out in the very chilly San Francisco morning air, doing good and helping clean up the city’s beautiful beach. No, I didn’t get anything out of this other than a sense of accomplishment, and the warm and fuzzy feelings one gets knowing one is doing something good for his fellow humans (oh, there was that cool t-shirt they gave us, too, but I digress).

So, this year, if you’ve found yourself doing well, making good investment decisions and/or feeling otherwise healthy and wealthy, why not take some of your units of choice and aim that at the charity of your choice? And whether you choose to donate a little time, a little money or, like me, a little time and a little money, I guarantee it will make you feel good.

Finally, remember that we only get so many trips around the Sun before our time here expires. So, within those beautiful trips, why would you want to be anything but kind to your fellow travelers?

Happy holidays, and may we always live our lives in the name of the very best within us!

If you wake up and don’t want to smile
If it takes just a little while
Open your eyes and look at the day
You’ll see things in a different way
Don’t stop thinking about tomorrow
Don’t stop, it’ll soon be here
It’ll be better than before
Yesterday’s gone, yesterday’s gone

Another Christine McVie classic off the “Rumours” album is “Don’t Stop,” a song that advocates for the premise that beauty and goodness in the world can be yours if you choose to look at life through the lens of an optimistic future. This benevolent universe perspective is something we all need to remember, especially when “the now” gets very tough — because it always will.