The Weekly ETF Report Has a New Name

An uncommon take on money, ideas and society.

That’s the subhead of the new name of this publication, “The Deep Woods.” Interestingly, that subhead came about serendipitously via a close friend and long-time reader.

This gentleman recently told me that he liked my writing because it provided him “a deeper, uncommon take on everything from money and investing to philosophy and social issues.” He also jokingly added, “Plus, I even get some great song lyric references along the way!”

Now, for a writer, market commentator and someone who tries to see the world through a wide lens of ideas, my friend/reader’s comments were the highest form of flattery. So, I took this observation, condensed it and voila! A new publication name and subhead that I think better reflects the scope and perspective found each week in this publication.

You see, I’ve always prided myself on trying to look a little deeper into issues than merely the self-evident facts. That deeper look allows me to make connections between facts, values and philosophy, which I hope enriches the way my readers look at the world.

Indeed, since taking over the Weekly ETF Report about a year and a half ago, I’ve offered up my views on not just subjects of investor interest, but also subjects as diverse as how to survive an active shooter, how to apply the lessons of your hobbies to the biggest of life’s decisions, the abuse of power and the rank hypocrisy of the Hollywood elite. I also have addressed the abundance of poor economic thought that permeates society, including Bastiat’s “broken window” fallacy as applied to Hurricane Harvey.

Most recently, I’ve written critically about what I consider to be the economically misguided tariff and trade war policies issued by the Trump administration. Policies that not only threaten to hurt investors, but that also threaten to hurt the entire global economy.

In The Deep Woods, I will continue to offer uncommon observations on a variety of eclectic topics, and I promise to apply the principles of reason to all of reality in an attempt to put the world into the most comprehendible and cogent philosophic context. Plus, I promise to keep the song lyrics, literary allusions and pop-culture references coming!

As for today, and the rest of the week, I am in Las Vegas for the annual FreedomFest conference. I am proud be joining an incredible lineup of big-name speakers and liberty-minded experts for a four-day festival of speeches, panels, debates and workshops on all sorts of subjects.

From money and investing to personal security and privacy, and from politics to law to activism and art, this year’s FreedomFest promises to the best conference yet. Click here to see the amazing agenda for this year’s show.

Plus, if you’re at FreedomFest this year, be sure to check out the media row, as I will be debuting my new lifestyle website and podcast, “Way of the Renaissance Man.” For more information on this project, and for show updates, be sure to sign up today.

In next week’s The Deep Woods, I will report back to you with the highlights of FreedomFest, and I’ll share with you some of my takeaways from the many presentations I plan on attending, as well as those I am giving. And, because I am someone who loves talking to and learning from interesting people, I’ll also share with you some of my personal anecdotes from what I think will be a truly epic event.

Finally, if you want to learn how I apply a deeper, slightly uncommon look at investing, the economy and politics to help my newsletter subscribers win big in the markets, then I invite you to check out my Successful Investing, Intelligence Report and Fast Money Alert advisory services, today!

This week’s featured fund, O’Shares FTSE U.S. Quality Dividend ETF (OUSA), is designed to track the performance of an index that seeks to track publicly listed large-capitalization, dividend-paying issuers in the United States.

Interestingly, OUSA was the first exchange-traded fund (ETF) that O’Shares started in July 2015. It was designed with the goal of holding quality, high-dividend companies with low volatility.

As a means of diversification and a way to limit risk, OUSA caps investment in any one holding at 5%. The fund is rebalanced on a quarterly basis to ensure that weighting limit and to account for any changes in the fundamentals of its holdings.

OUSA does not trade in huge volumes, but it has a relatively low spread that caters to small/individual investors and excellent block liquidity that makes it easy to enter and exit for large investors.

The fund makes good on its low volatility promise, as evident from the fact that in 2015-2017, the ETF’s maximum drawdown was 450 basis points less than that of the S&P 500.

OUSA has returned 32% since its inception in July 2015. Year to date, however, OUSA has underperformed the market to slip 2.32% through July 9. The fund also carries an expense ratio of 0.48%, which is higher than some of its peers’ expense ratios. However, OUSA does pay a solid monthly distribution that translates into annual distribution yield of 2.60%. 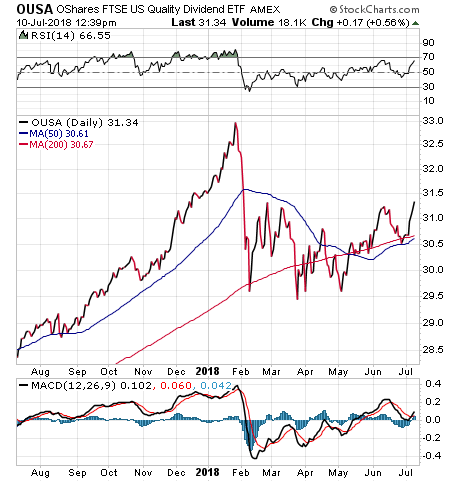 OUSA is not a typical high-yield ETF. It is not as heavily exposed to utilities and other rate-sensitive sectors. In fact, OUSA’s holdings are diversified across 10 sectors, with the largest concentrations of assets in industrials, 16%; in consumer goods, 14%; in consumer services, 14%; in technology, 13%; and in health care, 13%.

Last week was America’s birthday. It was 242 years ago that the world witnessed the official creation of a country based on Enlightenment values. I say that, because America is the byproduct of the supreme value of the Enlightenment — reason.

The principles embraced in her brilliant Constitution were written there by men of the Enlightenment. Those men realized that reason and its political corollaries of individual rights and freedom from government coercion were all necessary components of the optimal state, in which citizens had the best chance to thrive.

Well, nearly two and a half centuries later, America remains the epitome of what Dr. Steven Pinker calls “Enlightenment Now,” i.e. a country based on reason and respect for the individual.

So, to commemorate the Fourth of July, I’ve decided to reprint a story originally published on March 21, which provides further detail on the Enlightenment values presented in Dr. Pinker’s book and how these values are at the core of what has always made America great.

The Best of Times Is Right Now

What do you get when you put a Harvard psychologist on stage at the same Hollywood venue where they hold the Academy Awards?

The answer is one gigantic dose of feel good. That was my takeaway after attending a discussion given by Harvard University Professor Steven Pinker, a psychologist and best-selling author who just released a new book, “Enlightenment Now: The Case for Reason, Science, Humanism, and Progress.”

The central thesis of this work is that by nearly every metric that matters — health, lifespan, inequality, environment, knowledge, safety, quality of life, happiness and especially wealth — the world has never been better than it is right now.

The cause of this human progress, argued Pinker, is the embrace of Enlightenment values, chiefly reason and science, and the real-world application of these principles toward enhancing human existence.

In one truly dramatic chart from the book, Pinker shows the rise of Gross World Product from the year 1 through 2015. Here’s a snapshot of that chart that I took from my own copy. 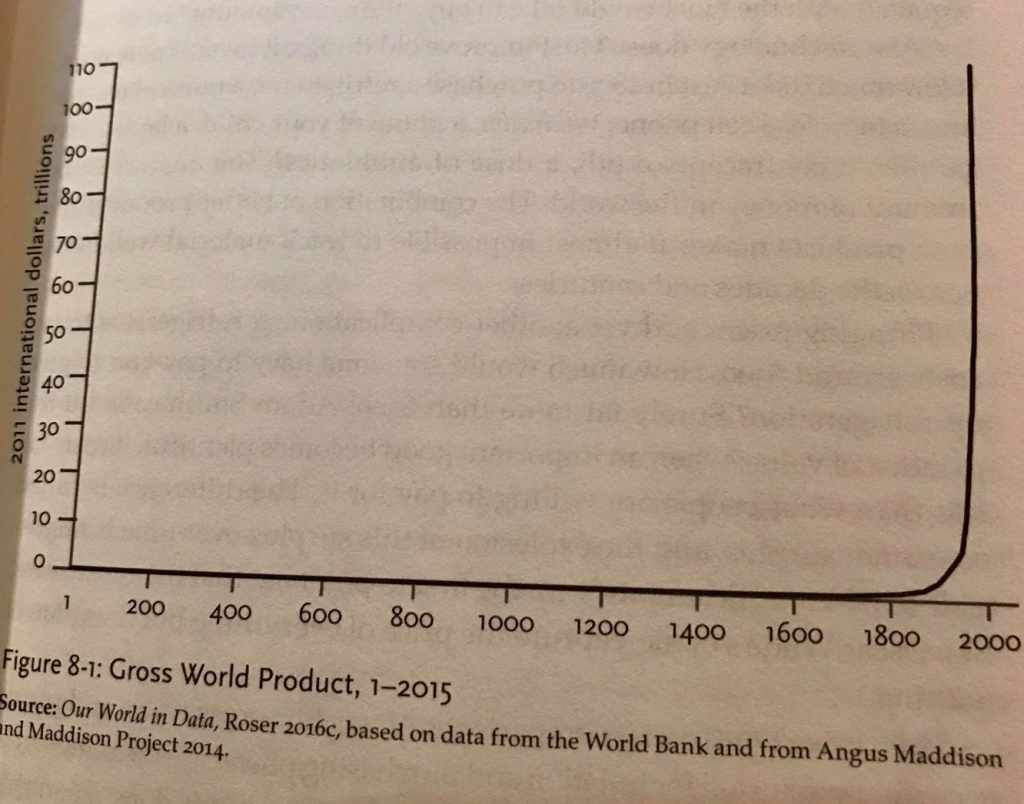 As you can see, up until the late 1800s, the world made little to no progress in terms of economic growth.

Then, the graph goes parabolic, as the rise of capitalism, the industrial revolution and the growth of cities creates an undeniable and stunningly dramatic surge in economic flourishing.

It is charts like this one, some 75 of them, that make this book so beautiful, and so uplifting.

It is not often that you get to see how great human beings are, and how well we’ve done with our world. And despite all our Shakespearean flaws, bellicose urges and tribal tendencies, we’ve managed to continually improve, enhance and recreate our societies in an onward march toward more human flourishing.

Yes, there are some things we haven’t got right along the way (two world wars in the 20th century, for example). But the evidence of progress is undeniable, and it’s presented brilliantly in this must-read work.

So, in the spirit of Professor Pinker’s work, consider that over the past 12 months, the Dow jumped more than 20%, while the S&P 500 climbed nearly 17%. The NASDAQ Composite has surged some 27.5%.

I could go back further, and the results would be even better, but I’ll stop here for now as I suspect you get my point.

The thing to realize here is that while there is no guarantee that human progress, and equity market progress, will continue in an upward trajectory, history clearly shows we’ve done a stellar job of making fools of the purveyors of doom and gloom.

Keep this in mind whenever you hear from those warning about the next devastating market crash.

On Daring to Think Publicly

The clinical psychologist, professor and best-selling author of a book I highly recommend, “12 Rules for Life: An Antidote to Chaos,” is someone unabashedly fearless in his willingness to tackle the difficult ideas at the heart of societal conflict. I don’t always agree with Dr. Peterson, but I find his analysis brave, keenly intelligent and phenomenally deep. If you want to think about reality and the ultimate meaning of our lives qua man, then read Jordan Peterson or check out some of his hundreds of hours of podcasts and lectures online. I assure you it is time eminently well spent.