Play at Your Epistemological Peril

Publisher’s Note: Are you looking for a great Valentine’s Day gift? We were going through some areas of our office and found a box of beautiful rose pendants that were widely popular a few years ago. These are 24K gold and pure silver — a hard combination to find in any jewelry store. Click here now to learn more about these elegant pendants and put a big smile on a special person’s face on Feb. 14! But hurry, we sold a bunch of these for the holiday season and we only have 49 of these left!

Play at Your Epistemological Peril

Today, Joseph R, Biden Jr. took the oath of office as the 46th president of the United States. And while you may not have voted for Mr. Biden, if you are a real American who cares about the country, you need to accept the fact that he is the legitimate president.

The reason why is because reality dictates that you do so.

Yet still, there appears to be a rather large swath of the country, including many smart people that I personally know, who thinks that the election was “stolen” and that voter irregularities and mass fraud were perpetrated in order to produce the Biden win. Yet, when given the opportunity to argue the facts of this situation in the courts, those who promulgated this theory had their claims summarily rejected in more than 60 cases.

Now, you may still think that there was mass election fraud, despite the lack of substantive evidence. But if you play that game, you play at your own epistemological peril.

I say that, because to believe something to be true without sufficient evidence, i.e. with just conspiratorial suspicions about a hidden, left-wing cabal engineering things behind the scenes, is to essentially obliterate the only tool of survival you possess — your reason.

Here we must apply the scientific and philosophical rule known as Occam’s razor to this situation. This rule basically says that, given two explanations that account for a set of facts, the simpler one is more likely to be correct.

So, in the case of the 2020 presidential election, what is the simpler explanation? That millions more people actually voted for Joe Biden and in sufficient numbers in key battleground states, or that there was a coordinated mass deception by shadowy forces intent on installing Mr. Biden and removing Mr. Trump from office?

What is more logical? That more people desired a change of leadership in the Oval Office after a year of a devastatingly inept response to a global pandemic, or that voting machines were hacked and/or otherwise controlled by George Soros and the deceased Hugo Chavez?

What is simpler? The fact that there are more Democrats (31%) and Independents (41%) than Republicans (25%) in the country (according to the latest Gallup data on party affiliation), or that those Republican votes were somehow sheltered and destroyed in the service of a Biden win?

Unfortunately, the claims by Mr. Trump himself that the election was stolen were the underlying cause of the repugnant assault on Capitol Hill two weeks ago by a cadre of his fanatical supporters. Here’s what President Trump said about the election that Wednesday morning to a throng of supporters who just shortly thereafter stormed the Capitol with destructive intent.

“Today I will lay out just some of the evidence proving that we won this election and we won it by a landslide. This was not a close election.”

Then Mr. Trump went on to provide zero evidence for this claim.

Instead, he told the crowd to go the Capitol to urge senators and members of Congress to confront the “egregious assault on our democracy.”

Anyone you want, but I think right here, we’re going to walk down to the Capitol, and we’re going to cheer on our brave senators and congressmen and women, and we’re probably not going to be cheering so much for some of them.

Because you’ll never take back our country with weakness. You have to show strength and you have to be strong. We have come to demand that Congress do the right thing and only count the electors who have been lawfully slated, lawfully slated.

I know that everyone here will soon be marching over to the Capitol building to peacefully and patriotically make your voices heard.”

It was this exhortation that has been blamed for inciting the seditious actions of the mob that day. And while I think it’s fair to criticize President Trump for consistently promulgating a falsehood about the election results, contrary to what many have said, I do not think it’s fair to actually accuse him of directly causing the violence.

I mean, he did explicitly say that the group should “peacefully” make their voices heard. He did not say the protests should be violent.

Because if you believe things for bad reasons, your mind and your life will be in conflict with reality — and that is a prescription for an unhappily disappointing existence.

For investors who are seeking some stability in an ever-changing stock market environment, the utility sector may be a smart place to look.

One exchange-traded fund (ETF) that may be of interest is First Trust Utilities AlphaDEX Fund (FXU), which tracks a layered, equal-weighted index of U.S. utilities firms picked from the Russell 100. The fund selects firms based on their value and growth factors and is partial to mid-cap stocks on the extreme ends of the style spectrum.

The majority of its assets are in the United States, and it has a large allocation in telecom companies. There are certain advantages to investing in utilities funds, including the fact that utilities companies are known for their high dividend yields and often can provide a steady stream of income for investors. Though FXU may be on the more expensive end of the ETFs that are currently available, it generally sees quick-paced trading and offers solid volume and narrow spreads for retail investors, while larger investors should find significant underlying liquidity for bulk trades.

FXU has an expense ratio of 0.62% and a dividend yield of 3.94%. It has $178.07 million in assets under management. The year 2020 was rough and unpredictable for the stock market in general, as the pandemic hit all businesses hard. However, as a fund dedicated to utilities companies, FXU saw a lull but spiked in April and again in June. It remained relatively steady through the rest of the year and saw another hopeful spike in December. Since then, it has tapered off slightly and it is currently trading at $28.28. 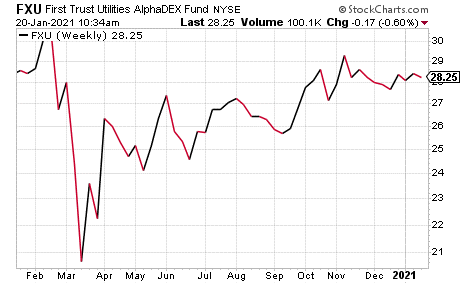 Utility funds may prove to be a solid choice, as many utilities are a necessity rather than a trend. FXU, which was created in 2007, favors aggressive companies that provide high returns and are based in the United States. In sum, First Trust Utilities AlphaDEX Fund (FXU) may be worth looking into for investors who want to generate a solid return while also staying in a sector that is often reliable.

However, this kind of ETF may not be appropriate for all portfolios. Thus, interested investors always should conduct their due diligence and decide whether the fund is suitable for their investing goals.

Every once in a while, you come across a musical artist that really touches you on numerous levels. That’s how I describe my latest Way of the Renaissance Man podcast guest, the singer/songwriter Robert Ellis.

In this episode, you’ll learn about Robert’s musical history, his professional journey, the struggles associated with mixing genres and developing his own sound and his constant desire to always be learning and to always be getting better.

You’ll also learn about Robert’s admiration for artists such as Neil Young, Paul Simon, George Jones and Willie Nelson, the critical role honesty plays in art and his love of simple tools for improvement, such as the metronome. 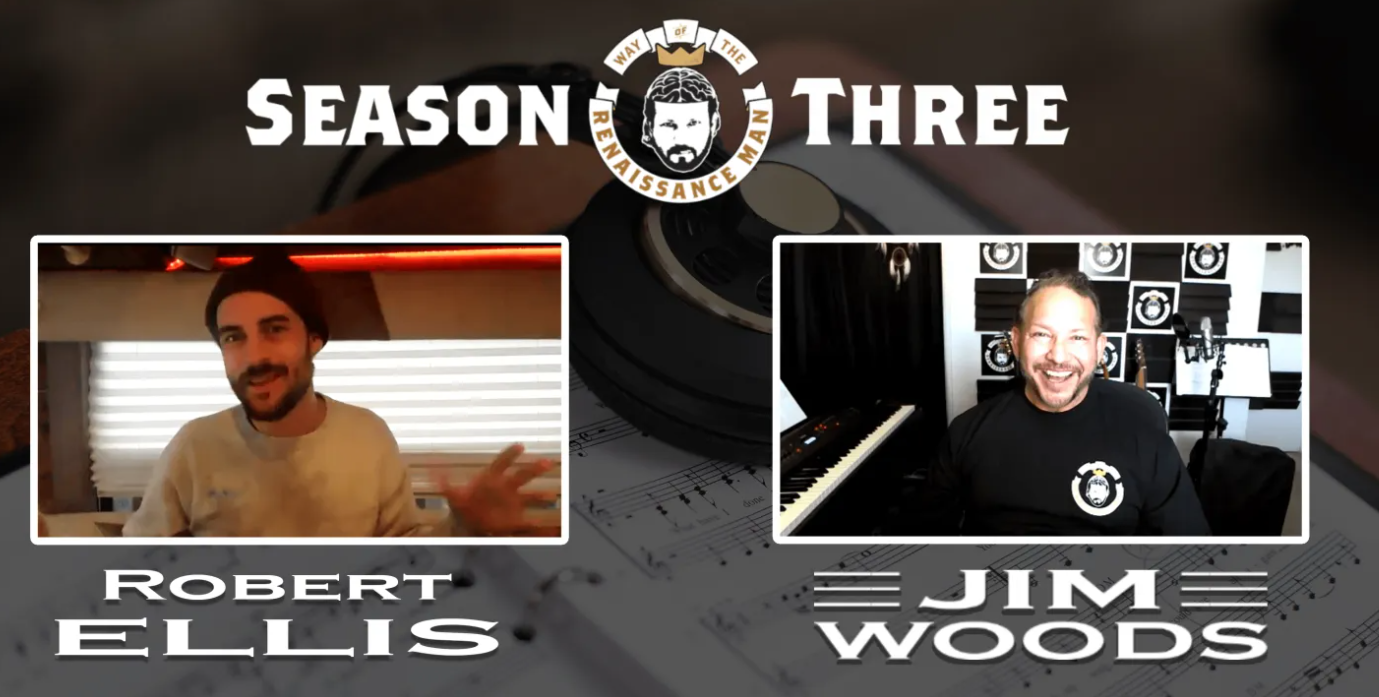 Plus, as he describes his work and the songwriting process, I point out the many ways Robert exemplifies and embodies the Renaissance Man ethos.

Robert Ellis is an artist who is committed to the love of discovery and the process of creation. By doing so, he’s given the world the beautiful gift of his music… a gift we all get to share with an exclusive solo acoustic performance of his song “Perfect Strangers” just for my podcast’s listeners.

I loved my conversation with the great Robert Ellis, and I know you will too.

A Love of Liberty

“Love of liberty means the guarding of every resource that makes freedom possible — from the sanctity of our families and the wealth of our soil to the genius of our scientists.”

It was 68 years to the day that President Dwight D. Eisenhower gave his first inaugural address as the 34th president of the United States. In it, the great U.S. Army general reminded the nation that liberty requires vigilance, and that we should never take for granted what makes freedom possible.