Have you ever noticed that childhood memories come about in all sorts of seemingly unconnected ways? Perhaps it’s just the way human memory functions, which is more like an association machine than a tape recorder. But when I see or hear words and/or concepts that evoke strong remembrances of things past, my mind is shuttled directly into a Proustian recollection.

I had one of those recollections today that was prompted by the Federal Reserve, and it was, of all things, about gumdrops.

You see, in my youth I liked a candy called “DOTS,” which during my research for this article I discovered was the No.1-selling gumdrop brand. As the Tootsie website states, DOTS are “a snacking staple for both moviegoers and candy enthusiasts everywhere… Tootsie produces more than 4 billion DOTS annually from its Chicago plant…”

Well, I haven’t eaten DOTS in a long time, but I have been digesting the “dots” for many years now, and today I was served up a hawkish-tasting and bitter dose of the dots courtesy of the Federal Open Market Committee (FOMC).

The term “dots” is Wall Street shorthand for the “dot plot,” and basically this is a chart that plots out where each Federal Reserve member thinks the federal funds rate will be at the end of a specific period. The graphic here from today’s FOMC data release shows where Fed members expect rates will be at the end of each of the next several years. 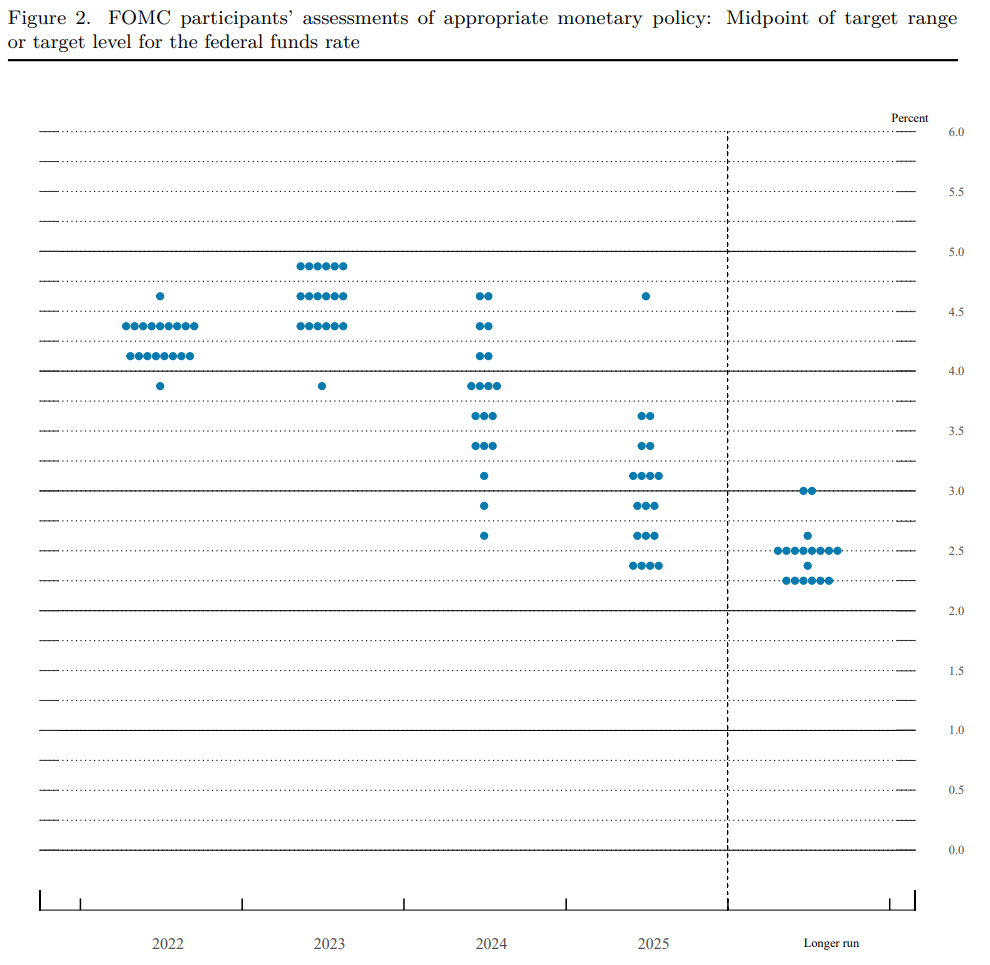 Perhaps more importantly, the FOMC now has projected that the so-called “terminal rate,” or the level at which rate hikes would stop, at a range between 4.5% and 4.75%. Interestingly, after the June FOMC meeting, the median projection was for the terminal rate was around 3.75%.

The reason this terminal rate matters is because at this point, investors just want to know when rate hikes are going to stop. Over the past two weeks, the main reason stocks have declined is because the market priced in a higher terminal rate than was previously expected, from 3.875% – 4.125% to 4.25% – 4.50%. Today’s even higher terminal rate now increases the chances the Fed will engineer an economic “hard landing” rather than a “soft landing,” and that, in turn, has weighed on stocks.

As for the market reaction to today’s FOMC news, we initially saw stocks sell off right at the 2 p.m. ET announcement. Yet when Federal Reserve Chairman Jerome Powell took to the podium for his press conference, the markets mounted a rally that sent the major indices into positive territory.

So, now the equity market is at yet another inflection point, as the smart money continues to price in the highest cost of money in more than 14 years. Will that new pricing mean more bitter-tasting bearish trading ahead?

While no one can say for certain, today’s hawkish taste of the Fed dots certainly doesn’t offer us a very sweet box of bullish gumdrops.

The utilization of uranium is a key component of nuclear energy, as the nuclear industry is propelled by the mining, refinement and delivery of uranium.

The Global X Uranium ETF (URA) offers investors exposure to a wide array of companies involved in both global uranium mining and its production. The exchange-traded fund (ETF) chooses companies that are purely involved in these pursuits or derive a large portion of their revenue from the uranium industry.

URA has amassed $1.76 billion in net assets and $1.77 billion in assets under management. The ETF is a highly traded, with an average volume of more than two million shares per day. Moreover, URA provides a high yield of 6.02% and has an expense ratio of 0.69%.

As evidenced in the chart below, URA has seen its share of ups and downs year to date, which is not unusual given the market uncertainty over the same time frame. However, while many stocks and sectors continue to falter, given the current inflation-rate debate, URA is rebounding.

In November 2021 and April this year, the ETF saw remarkable spikes. 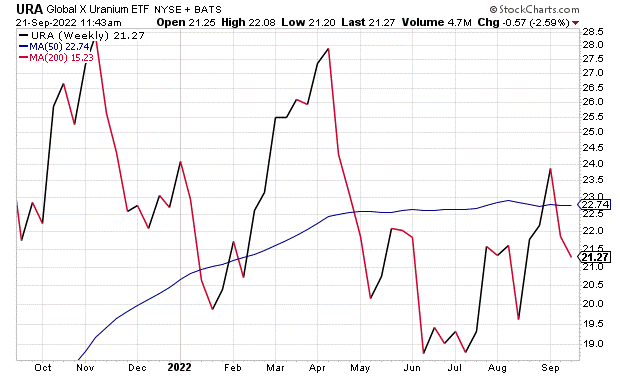 Ultimately, the Global X Uranium ETF is a nuclear energy play as it offers investors access to companies worldwide that participate in uranium processes including extraction, refinement, exploration and or manufacturing of the equipment for the uranium and nuclear industries.

So, while URA is a gateway to uranium and nuclear energy, this kind of ETF may not be appropriate for all portfolios. Thus, interested investors always should conduct their due diligence and decide whether a given fund is suitable for their investing goals.

Reject This Game of Thrones

If you’ve tuned in to TV news anytime over the past six days, you’ve been inundated with coverage of the death of Queen Elizabeth II. Indeed, the mostly fawning treatment of the Queen’s passing, her role in history, her record long reign, her succession, the celebrity and death of her firstborn son’s former wife, her other son’s sexual scandals, her grandsons and their personal drama and the sycophantic weeping of her “subjects” in the media has been something of a personal irritant to me.

Yes, I certainly understand the media’s desire to cover every moment of this situation. After all, the media is all about ratings, because ratings equal revenue, and news is a business, and the royals make for big ratings. And as a radical for capitalism, I endorse that.

However, as a man who abhors the notion of monarchy and its roots in such despicable ideas as the “divine right of kings,” I find the pageantry rather loathsome. In fact, I am someone who has a visceral sense of nuisance whenever I see a picture of the royals, and the reason why is because I’m opposed to concepts such as one human having political province over others simply by accident of birth. 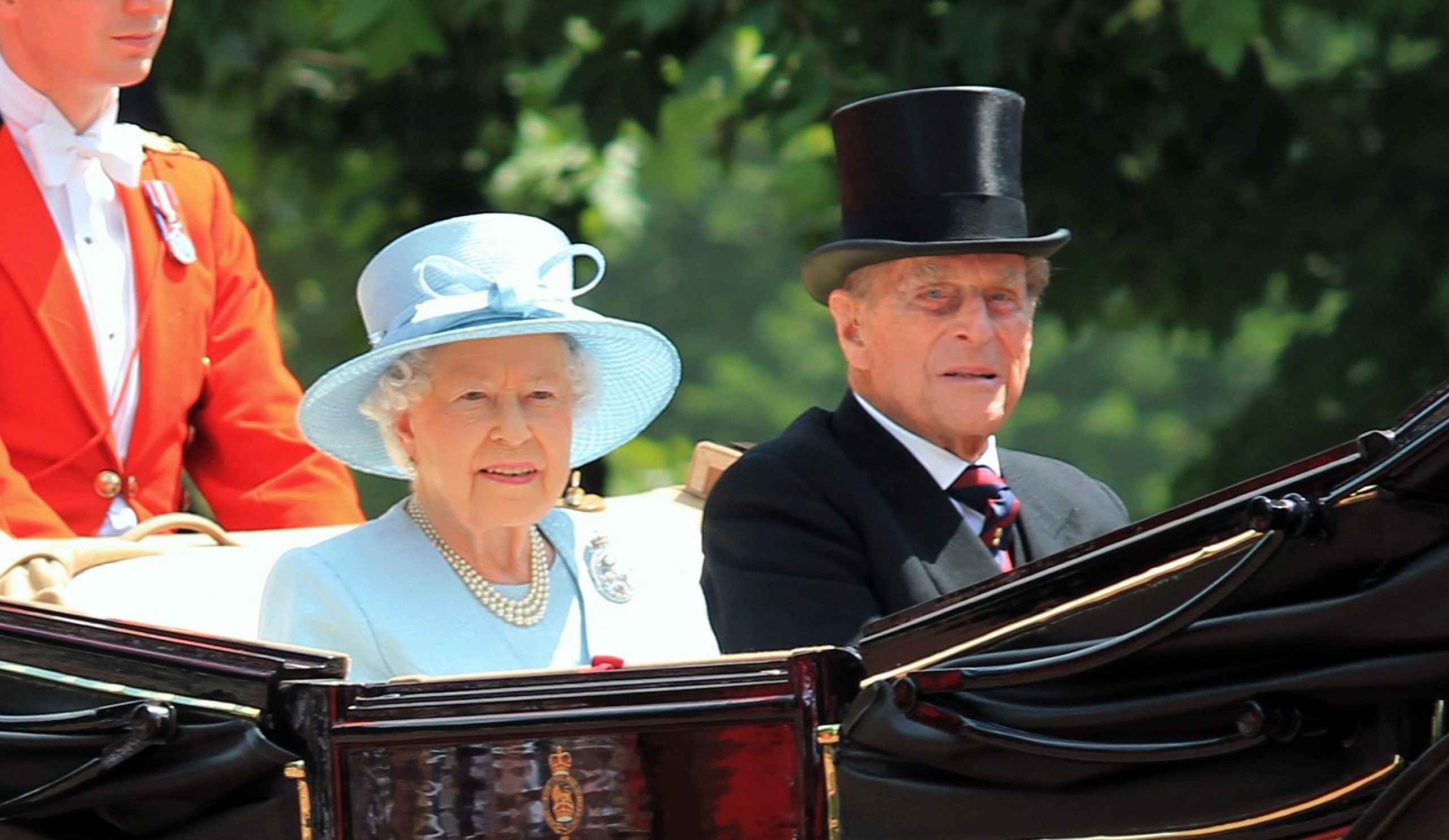 Now, I know I am viewing this issue through a decidedly American lens, but I was taught from my earliest reading of government that “all men are created equal.” Yet in monarchies of any kind, even the timid version such as that of Britain, the sovereigns are thought to be created better than their subjects, and therefore they have the right to tell other humans what to do, how to live and who to serve.

Stated in starker terms, in most historical “absolute” monarchies, subjects don’t own their lives, the king or queen does — and that makes people slaves of the state.

Of course, Britain is not an absolute monarchy any longer. The country has long been a “constitutional monarchy,” which is a system of government in which a monarch shares power with a constitutionally organized government — and this is indeed progress.

Yet in the case of Britain, King Charles III now is not only the titular and ceremonial head of state, but he’s also head of the Church of England and the head of the armed forces. Talk about being born with a silver spoon in your mouth.

Now, some writers/intellectuals that I admire, in particular Andrew Sullivan, have written eloquently about Queen Elizabeth II and the virtues she embodied. Here he writes, “With her death, it’s hard not to fear that so much she exemplified — restraint, duty, grace, reticence, persistence — are disappearing from the world.” Fair enough, as I am all for virtues such as grace, reticence and persistence.

But then a few paragraphs later, Sullivan goes on to defend the Crown by enlisting the help of writer C.S. Lewis, who once said: “Where men are forbidden to honor a king, they honor millionaires, athletes, or film stars instead; even famous prostitutes or gangsters. For spiritual nature, like bodily nature, will be served; deny it food and it will gobble poison.”

Think about this for a moment. In Lewis’s view, we should honor a king, who ascended to his lot simply by virtue of birth, but we shouldn’t honor millionaires, athletes or film stars — people who have actually put the hard work into it and have done what is required to achieve their status in life?

Yes, as Lewis says, spiritual nature, like bodily nature needs to be served. But I say that bestowing virtues on a person because of their birth, and not because of their actions, is gobbling up the worst kind of servile poison —  poison that inevitably leads to subjugation of the ugliest sort. And if you don’t believe me, read up on the violent atrocities of empires throughout history.

At the root, you’ll find the structural servility of men under the authority of monarchs — and to toward that poison, I say reject this game of thrones.

“A person who won’t read has no advantage over one who can’t read.”

Reading is one of the superpowers that humans can learn. Yet if you don’t read, you might as well not even know how to read. The flip side of this shrewd observation by the always-wise Mark Twain is that the more you read, the more advantage you’re going to have. So, make it a point to read more, and to increase your advantage in this game we call life.

IMPORTANT ANNOUNCEMENT: We are having our first Eagle Virtual Trading Event on Thursday, Sept. 29.  If you haven’t signed up for this yet, there’s still time. Just click here now to sign up for free. Believe me, you won’t want to miss this LIVE online event — as we bring together all five of Eagle’s investment experts at the same time (plus one special guest speaker) to reveal our 6 Ways to Create 4th Quarter Fortunes. Reserve your seat now by clicking here.