A Fond Farewell to a Libertarian Luminary

A Fond Farewell to a Libertarian Luminary

Mention the name “Koch” in American political circles and you’ll get reactions ranging from revulsion to loathing and from gratitude to celebration. Not surprisingly, news of the death of David Koch last Friday at age 79 elicited a wave of responses from both the political left and the political right.

Just reading some of the editorial headlines on the billionaire businessman, philanthropist and political activist is enough to demonstrate that he became a polarizing figure. For example, the website Common Dreams ran the headline, “David Koch’s Monstrous Legacy.” In the United Kingdom, The Guardian’s headline was, “Death and destruction: This is David Koch’s Sad Legacy.”

Then there were the comments by comedian Bill Maher (who I must admit I am a fan of when it comes to his humor) on his TV show “Real Time.” Maher outright celebrated the death of a prominent conservative in his opening monologue, crassly saying of Koch, “F*** him,” and “I’m glad he’s dead.”

Then there were more sober opinions, ones that also celebrated the life of a man, who, along with his brother, boldly put his money where his ideas were and tried to shape the world in his image. 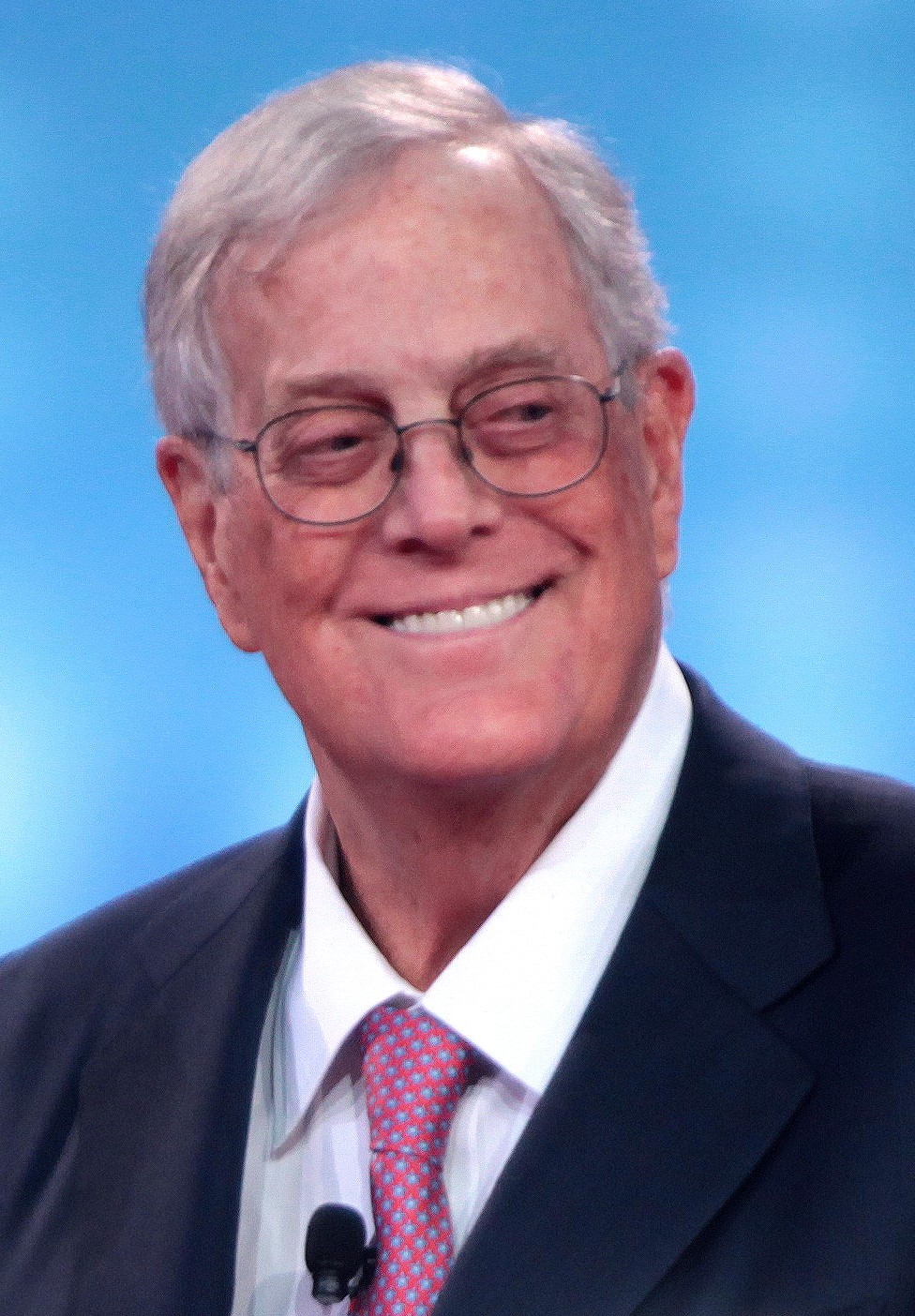 “RIP to a man who lived a life of liberty, peace and philanthropy. Great blessings bring great responsibility, and David Koch lived that way. His many contributions will have lasting impact on our country. My thoughts are with his family today.”

Now, it should come as no surprise that I was a fan of the Koch brothers. First of all, they grew their family’s business, Koch Industries, together into one of the most successful and profitable industrial enterprises in the world. For that alone, they deserve reverence.

Yet what got the ire of the political left is the Koch brothers’ support and funding for free-market political causes and for political candidates with a libertarian bent. The Kochs were not Republicans. Rather, they were lifelong libertarians whose work and charitable donations reflected the values they held. These values included a love of free enterprise and the need to restrict and limit the power of government.

In a book I highly recommend, Radicals for Capitalism by Brian Doherty, Koch said in an interview that his father taught him “big government was bad, and impositions of government controls on our lives and our economic fortunes was not good.”

The Koch brothers used that premise to animate their activism, which included David Koch winning the nomination for vice president on the Libertarian Party ticket in the 1980 presidential election, as well as his support of the Reason Foundation, which publishes one of my favorite publications, Reason magazine.

And largely because of their support for freedom, markets and limited government, the Koch brothers became a lightning rod for the left and virtual paragons of so-called evil, greedy businessmen who wanted to destroy the climate, make the world safe for the top 1% and gobble up all of the world’s wealth for themselves.

Hey, every cause must have its villains. To the left, there were no better villains than the Koch brothers.

Because of David Koch’s focus on that noble ideal, I invite you to join me in bidding a fond farewell to this libertarian luminary.

ETF Talk: Harnessing the Power of Energy with a Utility ETF

The Utilities Select Sector SPDR Fund (NYSEARCA: XLU) is an exchange-traded fund intended to give shareholders access to the utilities segment of the economy.

Specifically, XLU tracks the Utilities Select Sector Index, which, in turn, attempts to mirror the performance of the utilities sector of the S&P 500 Index. The decision of XLU’s management to invest only in utility companies that are in the S&P 500 has allowed this ETF to amass huge assets and volume.

The fund currently has more than $10.89 billion in assets under management and an average spread of 0.02%. It also has an expense ratio of 0.13%, meaning that it is less expensive to hold than some other ETFs. 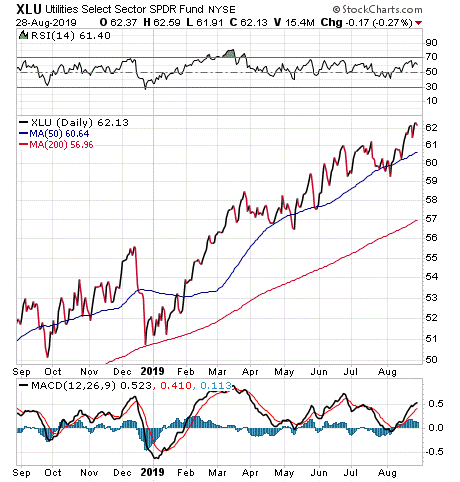 Of course, while XLU does provide an investor with the chance to profit from the world of utilities, the sector may not be appropriate for all portfolios. Thus, interested investors always should conduct their due diligence and decide whether the fund is suitable for their investing goals.

Talking Freedom with a French Firebrand

You wouldn’t think that concepts such as freedom, liberty and capitalism would need to be defended as a societal positive. I mean, history has certainly adjudicated their virtue.

Yet as we repeatedly hear from politicians, social critics and even the nation’s top business leaders, these concepts need to be modified or thrown out because they can lead to “wealth inequality,” an oppressive “top one percent” and “big, evil corporations.”

Well, in the new episode of the Way of the Renaissance Man podcast, you’ll hear a good dose of pushback on that notion from one of my favorite free-market advocates, Veronique de Rugy, senior research fellow at the Mercatus Center at George Mason University.

Veronique has channeled her infectious passion and caring for the subject into a career of defending one of the greatest ideas that humans have ever produced — the idea that people should be free to interact with one another in the pursuit of profits. 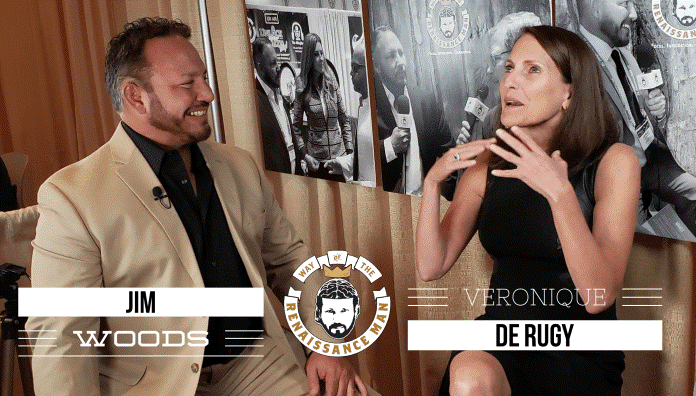 In this episode, you’ll also discover why I think Veronique’s contagious advocacy of freedom and capitalism sets a perfect example that every Renaissance Man — and Renaissance Woman — can learn from.

I really enjoyed my conversation with Veronique de Rugy, and I know you’ll find this French firebrand is a beautiful example of what happens when passion meets intelligence.

And now, here’s my conversation with Veronique de Rugy.

What the Business Roundtable Should Say

The Business Roundtable just redefined the purpose of a corporation.

While it used to be that making money, generating profits and delivering value for shareholders was the raison d’être of companies, apparently that pursuit represents old-fashioned thinking. Today, America’s business leaders think that the true purpose of a corporation is to “serve all Americans.”

The group’s newly revised “Statement on the Purpose of a Corporation” has come into the news recently, because the focus has gone away from the notion of “shareholder primacy” and to what it calls a “commitment to all stakeholders.”

The move has gotten a lot of attention from the financial and mainstream media, and I suspect that attention was indeed what the Business Roundtable sought out when issuing its revised statement. Predictably, nearly every opinion out there has praised the decision, in essence saying that it represents a realization that corporations should be concerned with more than mere profits. They also should be concerned with the good of the people.

In the past, the Business Roundtable’s statement of purpose was far more free market in nature. It even espoused economist Milton Friedman’s theory that a company’s only obligation is to maximize value for shareholders.

Apparently, the notion is a relic to the new milieu, one where the likes of Senators Bernie Sanders and Elizabeth Warren are real contenders for the Democratic presidential nomination, and a milieu where the current president thinks it’s okay to punish Americans with taxes, i.e. tariffs, on imported goods in the service of winning a trade war that we’ve been conscripted to fight.

I think this tack to a populist, even collectivist, appeal by the Business Roundtable is not only an unfortunate abnegation of corporate responsibility to shareholders, it also represents a capitulation on the very essence of morality.

In this case, it’s the defense of capitalism and the morality of making money.

You see, while some see making money, i.e. profits that can be returned to shareholders, as some sort of necessary evil that corporations provide to society, I see profits as the most moral pursuit any corporation or individual can undertake.

The reason why is because making money, making a profit, means you are providing a value to others — a value that others are willing to pay you for. And, making a profit means you created that value where one did not exist before.

Take the example of an Apple (AAPL) iPhone. I paid about $1,000 for mine. It didn’t cost Tim Cook and company that much to make it. In fact, the cost was far from that. Yet I am willing to pay that much for my iPhone because the iPhone is more valuable to me than that $1,000. I get what I want, Apple and its shareholders get what they want.

So, I ask you: What’s more moral than a voluntary, value-for-value exchange between two parties who mutually benefit?

The answer is nothing.

Instead of trying to turn members of the corporate community into social justice warriors, I think the Business Roundtable should be proud of profits, proud of its commitment to shareholders and proud of the virtue of making money.

If I were in charge of this group, I would advocate for the insertion of the following passage from perhaps the greatest novel ever written, Ayn Rand’s “Atlas Shrugged.”

“If you ask me to name the proudest distinction of Americans, I would choose — because it contains all the distinctions of the others — the fact that they were the people who created the phrase ‘to make money.’ No other language or nation had ever used these words before; men had always thought of wealth as a static quantity — to be seized, begged, inherited, shared, looted or obtained as a favor. Americans were the first to understand that wealth has to be created. The words ‘to make money’ hold the essence of human morality.”

Hey, if the Business Roundtable’s mission was to get attention with its statement, well, this would certainly do the trick.

The Virtue of Setting Yourself on Fire

“Success is not the result of spontaneous combustion. You have to set yourself on fire.”

The great writer and humorist was a profound quote machine, and the wisdom imparted in this week’s quote is something that I really love. You see, if you want to achieve anything in life, whether it be a career goal, financial freedom, physical health, etc., you have to approach the process intensely and deliberately. You can’t just hope your motivation spontaneously combusts. Instead, you have to take a torch and light that passion on fire, so much so that it consumes your entire being.

Think about it this way: Have you ever done something really worthwhile that didn’t require an all-out commitment? If you want to capture success in anything you do, you have to be willing to burn up in the process.