What Will the Fed’s Cut Mean for Markets?

The Federal Reserve did something today that it hasn’t done in more than a decade — it lowered the benchmark interest rate.

Now I don’t know about you, but I remember quite well what happened in 2007 that ignited the Fed’s barrage of rate cuts, and it’s not a pleasant memory. A devastating recession and ugly bear market were no fun to go through.

Yet the one saving grace to that big economic and market tumult is that subscribers to my Successful Investing newsletter almost completely sidestepped the big sell-off because we were faithful to our trading plan that gets us in the market when stocks are trending higher, and keeps us out of the market when stocks are in a protracted downturn the way they were in 2007-2008.

As for today, the Federal Open Market Committee (FOMC) reduced its overnight target rate range by a quarter of percentage point, to between 2% and 2.25%. The 25-basis-point cut in the federal funds rate was largely what Wall Street expected; however, there were some disappointed traders I spoke with that were hoping for a 50-basis-point cut in the benchmark overnight rate.

Interestingly, there is no crisis right now economically, nor is there a plunge in the markets. In fact, it’s just the opposite. The market is trading near its all-time highs, and the economy is being touted by those in political power as the “best economy in U.S. history.”

So, the question now is: What will the Fed’s latest move mean for markets?

Initial reaction to the FOMC decision was rather muted, with stocks giving up a little bit of ground after the announcement. That should come as little surprise, because ever since June the market has been pricing in a 25-basis-point reduction in the cost of capital.

Yet what was a big surprise was when Powell held his press conference post-statement release. That’s when the market definitely did not like what it heard. At one point, the Dow Jones Industrial Average had plunged some 400 points before recovering a bit toward the end of the Powell presser. 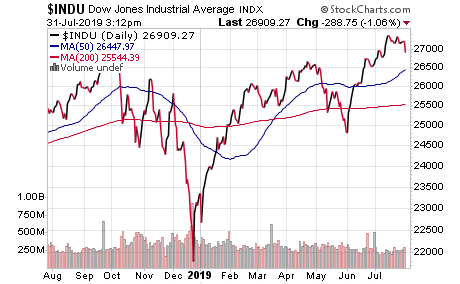 The reason why is because Powell and company failed to signal that the Fed was sufficiently worried about the economy such that the market can expect additional rate cuts going forward, and that the Fed was going to ease policy significantly.

“The Fed didn’t alter any of its forward guidance in the FOMC statement, so it didn’t get more dovish,” said Tom Essaye of Sevens Report Research. “The market is still very concerned about economic growth, but yet it doesn’t appear that the Fed is as concerned,” added Essaye.

This makes sense if we look at what’s happening in the bond market, as the yield on the 10-year Treasury note is about to drop below 2%. That decline only makes sense if investors are worried about future growth.

The takeaway here is that market doesn’t think the Fed “gets it,” and that the Fed simply is not dovish enough right now. That’s why stocks are falling today, and until Powell and company get in step with market expectations, the Fed’s latest move for markets could very well continue to be lower.

Still, I do think it’s important to say that today’s move does represent an about face by the Fed. Remember that the central bank was extremely hawkish late last year. In October, Powell told us that interest rates were “a long way from neutral.”

Then in December, the Fed hiked rates by a quarter point for the fourth time that year. That rate hike led to a crushing in the market, with one of the worst Decembers on record for the major domestic indices. 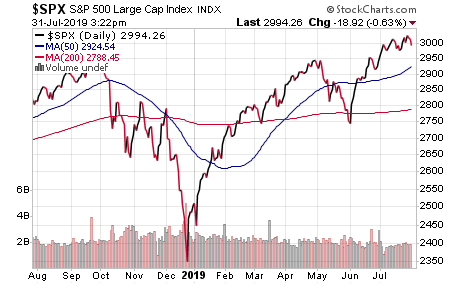 The one-year chart here of the S&P 500 clearly shows the reaction markets had to the Fed hike in December. And while markets came roaring back on some dovish Fed speak in late December/early January, the markets pulled back again in May when Powell called low inflation “transitory.” Then, in June, the rebound in stocks continued due to the aforementioned expectations of today’s rate cut.

The bottom line, however, is that today’s rate cut, along with the Powell comments, appear to be viewed as a “one-and-done” move by the Fed on rates. That is not what the markets were expecting, or what the markets wanted, hence today’s selling.

If the bulls are going to rebound, we will need to start seeing another about face by Powell and company to a more dovish posture — an about face that’s now become commonplace from this Fed.

ETF Talk: Building Your Portfolio with a Basic Materials Fund

The Materials Select Sector SPDR Fund (XLB) tracks a market-cap-weighted index of U.S. basic materials companies. The fund includes only the materials components of the S&P 500.

This index is primarily composed of companies involved in industries such as chemicals, construction materials, containers & packaging, metals & mining, and paper & forest products. XLB is a massive, liquid exchange-traded fund (ETF) that invests in basic materials companies from the S&P 500.

Its limited selection universe means it is heavily concentrated, with just a few holdings making up a huge chunk of the portfolio. XLB generally favors large-cap holdings, but still offers reasonable exposure to the space.

The fund is one of the most popular in the U.S. materials segment, with a huge asset base and extraordinary trading volume. It has excellent potential for occasional traders and larger investors alike. 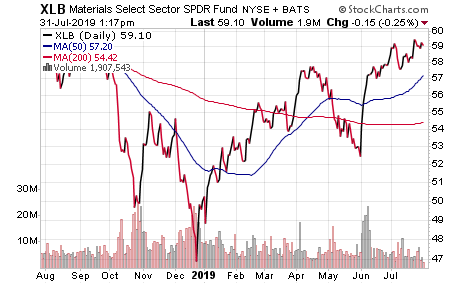 The fund has $4.54 billion in assets under management, a $40.98 billion average weighted market cap and 29 holdings. Its average spread is 0.02% and expense ratio is 0.13%, meaning it is relatively inexpensive to hold compared to other exchange-traded funds (ETFs). XLB pays a $0.35 dividend, giving it a 1.90% yield. The fund currently trades just below $60.

XLB provides exposure to the Basic Materials sector, as well as large-cap stocks. However, each fund has its own investing goals and, as always, it is crucial for every person to conduct his or her own due diligence to decide whether or not it makes sense personally.

Sometimes life vaults us to heavenly heights and sometimes we are brought down to earth by the banalities of bureaucracy.

Two weeks ago, I had the privilege of celebrating freedom alongside some 2,000 of my fellow liberty lovers at this year’s FreedomFest conference. One week later, I was brought back to the reality of invasive government and its irritating intrusion into all of our lives.

Let’s start with the glorious experience worthy of remembrance while it remains at the forefront of my mind. For four days, I listened, spoke with, gave presentations to, and dined with many of the liberty movement’s brightest luminaries.

I also enjoyed some very in-depth conversations with those that I interviewed for my podcast, Way of the Renaissance Man. In fact, this year my team helped me outdo even last year’s bountiful production, as I recorded 16 new podcast episodes for the upcoming Season Two of the lifestyle, idea and personal empowerment show. 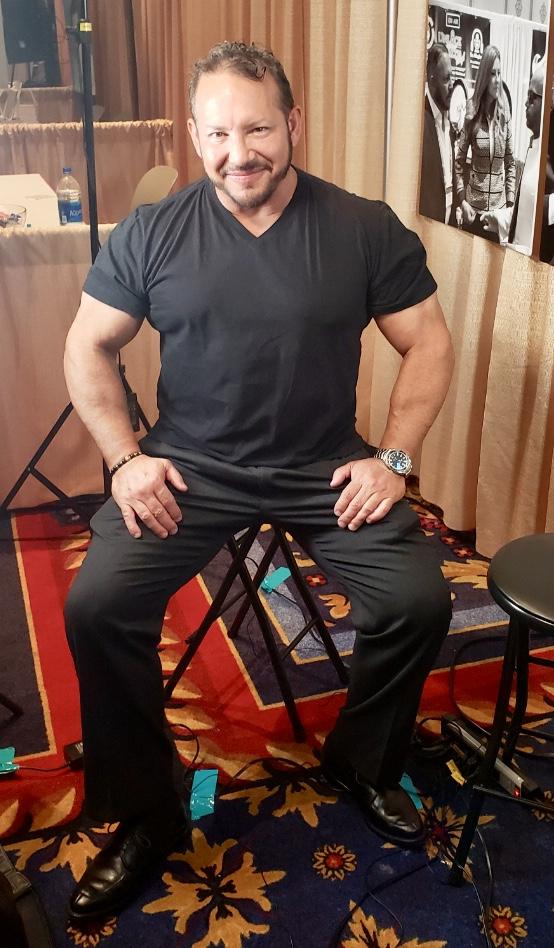 On the set of the Way of the Renaissance Man podcast.

I also would like to thank my production staff, producer extraordinaire Heather Wagenhals of Unlock Your Wealth TV and Emmy-Award-winning master sound engineer Michael Terry. I also want to thank my colleagues at Eagle Financial Publishing for helping to promote my newsletters, including Paul Dykewicz, John Phillips, Roger Michalski, Ned Piplovic, Hilary Kramer and of course, Dr. Skousen.

It’s funny how much spiritual and intellectual fuel one can drink down over the course of a few days. To me, there is nothing more exhilarating and life-affirming than basking in the intellectual pursuits that promote what could be deemed the master value: liberty.

Ironically, a mere 36 hours after the final toast was raised at the FreedomFest gala on Saturday night, I found myself in a less-than celebratory line awaiting the state sanction of my driving privileges.

In California, the agency is called the Department of Motor Vehicles or DMV. And even though I had an appointment, which I had to book approximately six weeks in advance, I still had to wait a couple of hours to fill out the paperwork that takes less than seven minutes to process.

Normally, I would simply renew my license via mail and pay the requisite booty that is levied by the state leviathan. Yet this time, my visit required an in-person validation, as I had to get what’s called a “Real ID.” This is an ID that government requires that you possess if you want to board a commercial domestic flight. The rule goes into effect on October 1, 2020, so at least I am more than a year ahead of the curve on this one.

Still, as a small “l” libertarian, the idea of getting the state’s permission to travel around the country via airplane just roils me. Shouldn’t my right to travel be up to me and the airline I choose to pay for my trip? Of course it should, but apparently, the powers that be in the California state government weren’t very influenced by the kind of ideas I was reveling in at FreedomFest.

Too bad, because I am convinced that a good dose of rational thought, delivered in an entertaining and persuasive way like I saw at FreedomFest, might just make a few of those in power question the need for invasive paperwork, intruding fees and the usurpation of citizens’ time.

And while I am under no illusion that the bureaucrats in charge of California’s state agencies and its state government are about to do an about face and embrace the freedom that I witnessed two weeks ago, I do think that a little taste of liberty sprinkled about wherever and whenever possible is a good start to nudging the world in a positive direction.

As I’ve said many times, the only antidotes to bad ideas are good ideas and there are no better ideas to promulgate than freedom, liberty and the pursuit of one’s own rational values.

That is what I will always do in this publication, in my newsletters and via my podcast. Because the only thing more important than being a champion for liberty is, well… nothing.

“Reject your sense of injury, and the injury itself disappears.”

The stoic reminds us that when considering the psychic injuries inflicted on us by others (as opposed to physical injuries), the best way to deal with it is to completely reject it and thus render it helpless. For example, let’s say you are insulted by someone via social media. If you reject the insult as meaningless, it will have no impact or injury on you.

If you want to live happier, take the negativity that others push on you and brush it off as mere dirt on your shoulder. Not only will that make you stronger, it will neuter any power that you give others. Remember, your happiness is up to you, so assume control and reject injury.