When I was a kid, one of the biggest “battles” in American culture was Pepsi vs. Coke.

Pepsi even issued its famous “Pepsi Challenge,” where it invited people to take a blind taste test to see which cola they preferred. My family actually replicated this test, and I easily chose Coke every time.

Now, the Republican Party is facing its own form of ideological taste test. But instead of Pepsi vs. Coke, the choice now is Trump vs. Koch.

In two tweets expressing his disregard for the billionaire libertarian activists Charles and David Koch, the president offered up the following assessment of the influential political donors:

The president continued his criticism of the Koch brothers, writing:

Now, the president’s Twitter sentiment toward the Koch brothers didn’t just come out of nowhere. The comments came in response to statements by Charles Koch and his aides, who revealed at their annual donor conference that they would not be supporting some Republican Senate candidates who are in line with Trump’s tariff and immigration policies.

This is classic Donald Trump posturing. Not only is he unafraid to slay the sacred cows of Republican policy of the past, but he also does it via a passive-aggressive demeaning of those who he percieves as his political enemy. Note the buzz words at play, including “globalist,” “overrated,” “America First” and “puppet.”

Now, to be certain, President Trump knows exactly what he’s doing by choosing these words. And, what he’s doing is fomenting dissent between him and two people who have a vision for the country that conflicts with Mr. Trump’s on a few key issues, particularly those of tariffs and immigration. Hey, that’s fair enough. I mean, politics is a bare-knuckle brawl. And, you do what you have to do to win. I get that.

Yet what I think we should be asking ourselves is what flavor of idealogical soft drink tastes better, and which is better for the country. Is it Trump or Koch?

Let’s conduct our own sort of Pepsi Challenge here and do a blind taste test of the ideas at odds here, rather than make it about Trump and the Kochs.

In the first intellectual cup, you get a mixture of… tax cuts, deregulation, economic nationalism, populism, protectionism, tariffs, the concept of trade wars are “good” and easily winnable, a zero-sum view of trade policy, a crackdown on immigration and the view that it is a net negative for the economy.

In the second intellectual cup, you get a concoction of… tax cuts, deregulation, a push toward more international free trade, more economic freedom, anti-protectionism, trade and immigration policy skewed toward freedom, an anti-establishment fight against climate change and the big government fixes associated with it, and a libertarian view on criminal justice reform.

While both of the sodas have their similar flavor appeals; for me, the far more bitter tasting intellectual cup is the first one. The second cup is much more appealing to my intellectual palate. Why? Well, because the key ingredient here is more freedom, less government, and more trust in capitalism than in big government.

It is this freedom agenda of the Koch brothers that has earned them a diabolic reputation from the left, especially the socialist left as exemplified by Sen. Bernie Sanders.

In fact, President Trump actually sounds a little bit like Bernie Sanders when he criticized the Kochs, a fact pointed out with characteristic wit and humor by Lisa “Kennedy” Montgomery of Fox Business:

“The president sounds ‘exactly’ like Bernie Sanders when he irrationally demonizes the Koch brothers and idolizes tariffs and protectionism. If he embraced his fickle free market whims, he could save his energy to fight the real enemy: statist socialists who want to bring down the entire system, so the government can run your life and force you into an early grave. Socialism is the worst bad idea of all.”

It is because the Koch brothers stand strong against socialism’s constant creep that they have such a diabolical reputation on the left. And make no mistake about it, both Charles and David Koch are formidable — and formidably wealthy — activists who put their money where their ideas are. And to their credit, they do so even if those ideas conflict with those of a Republican president.

So, which taste do you prefer? Trump or Koch?

I am scheduled to moderate a fiery debate between Mark Skousen and Mike Turner on “Buy and Hold vs. Market Timing,” Aug. 23-25, at the San Francisco MoneyShow. I also will be doing two presentations, one titled, “How to Invest Like a Renaissance Man” and one titled, “7 ETFs to ‘Trump’ the Market.” I hope to see you there!

OEUR is an exchange-traded fund (ETF) designed to reflect the performance of publicly listed, large- and mid-capitalization, dividend-paying issuers in Europe. To be considered for inclusion in the portfolio, targeted issuers must exhibit three main attributes: high quality, low volatility and high dividend yields.

While OEUR seeks out companies with solid dividend yields, the additional emphasis on quality gives the ETF a kind of safety net. For dividend funds, the quality factor often can mean eschewing the companies that currently pay the highest yields, since these often are less stable than those that have track records of long-term dividend payout and growth. As such, OEUR’s respectable 3.7% yield is built on solid ground, even if the payout could be higher.

Additionally, due to its concentration on European countries and minimal weighting in technology (less than 1%), OEUR is well out of the way of most trade or tariff-related volatility that may occur. OEUR’s top three European allocations are the United Kingdom, 28.7%; Switzerland, 18.7%; and France, 16.2%. Its top three sectors by allocation are Health Care, 19%; Consumer Goods, 18.1%; and Industrials, 15.4%. 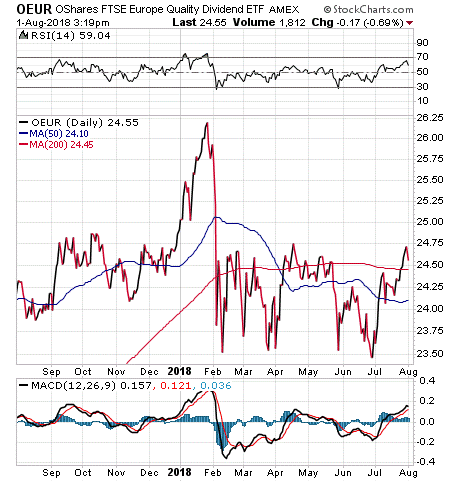 One point of concern to be aware of here is the low number of outstanding shares and daily trading volume. According the fund’s website, OEUR only has 1.6 million shares outstanding and a volume of 5,500, which was a contributing factor in its addition to Seeking Alpha’s ETF Deathwatch List for June 2018, coming in at 22 out of 26 new ETFs. The fund’s expense ratio is a moderate 0.58%, with its net assets totaling $40 million. Plus, the fund pays dividends on a monthly basis, which could be attractive to income investors.

Investors interested in receiving a monthly dividend distribution through a low-volatility international fund may want to look into the O’Shares FTSE Europe Quality Dividend ETF (OEUR).

Dear Uncle Sam, Please Stay Out of My Mouth

Behold the case of the Uncle Sam straw ban.

Yes, you read that correctly. Straws now have become the demon seed of society, a plastic plague on the environment that no self-respecting, caring or compassionate person can allow to continue damaging Mother Earth and her progeny.

In a recent article at Reason.com, free-market warrior John Stossel, a man I’ve admired for decades, described the current push to place plastic straws on the endangered species list:

If environmental zealots and sycophants get their way, you won’t be allowed to sip it through a plastic straw.

Actress Nina Nelson and other celebrities made a video claiming that plastic straws kill sea life: “In the USA alone, over 500 million straws are being used every single day, most of which are going into our oceans.”

“I will stop sucking,” vowed the celebrities.

In obedient response, Seattle banned plastic straws, and other places plan to follow. Starbucks, Hyatt, and Hilton are all abandoning straws.

Katy Tang, of San Francisco’s Board of Supervisors, says, “We are no longer going to allow for plastic straws here.”

Yep, you just can’t make this stuff up! As if that weren’t enough, this campaign even has its own social media hashtag: #stopsucking.

In this campaign, there is a claim that in the U.S. alone, we use 500 million plastic straws every day, many of which end up in the ocean.

What’s interesting about the straw ban movement, and what also is very typical about so many environmental and “feel good” societal movements, is that a simple digging into the facts often obliterates its proponents’ central claims.

As Stossel points out, while plastic pollution in the oceans is a real problem, the bulk of that pollution comes from Asian countries. Moreover, he makes the point that of the small amount of plastic waste that does come from America, only a tiny fraction of that is due to plastic straws.

As it turns out, the 500 million straws per day claim came about by the rigorous academic work of a nine-year-old boy who made a few telephone calls to straw manufacturers.

As Stossel writes, “Because the boy is cute, the media put him on TV. Now the media, environmental activists and politicians (is there a difference?) repeat ‘500 million straws used daily… many end up in oceans,’ as if it were just fact. The real number is much lower.”

Even if the number was 500 million, though, is that reason enough for the government to ban a product that citizens choose to use each day? What about the unintended consequences? If the plastic straws are banned, what will replace them?

Clearly, the environmental warriors haven’t factored in the potential costs of their solution, but hey, who can be worried about such trivial issues as cost when you are trying to save the oceans from straws?

Now, in The Deep Woods, we don’t just look at an issue from the standpoint of cost, or emotions, or even practicality. In this publication, we peel back the layers of the onion skin on issues to get into the core of the matter. Here, the core principle is the initiation of government force.

Should the government have the right to impose its will on citizens to ban a product where the alleged damage it does is based on murky science and feel-good sentiment from celebrities?

My answer is a big, emphatic… NO!

So, the next time you hear about a plastic straw ban, or if there is a movement in your area to impose a regulation as meddlesome as this is, stand up for your rights and just say enough is enough. Don’t permit your freedom, however seemingly small, to be taken away from you in the name of the “greater good.”

The time has long since passed for Uncle Sam to stay out of our mouths.

“Freedom is lost gradually from an uninterested, uninformed and uninvolved people.”

Jefferson is my favorite Founding Father, and if you’re familiar with my worldview that should come as no surprise. One reader who is indeed familiar with my view is Tim L., as he suggested this Jefferson quote for us. I love this quote, because it’s a warning to us all that we must constantly be vigilant when it comes to preserving and protecting the ultimate value — freedom. So, be interested, be informed and get involved. Freedom is worth the effort. And, if you don’t think so, consider the alternative.