The Cautionary Tale of Ken Fisher

The Cautionary Tale of Ken Fisher

Remember the band Supertramp? One their best-known classics is “The Logical Song.” And if you know the song, you also know the memorable first line in the chorus:

“I said, watch what you say, or they’ll be calling you a radical.”

Perhaps money manager Ken Fisher should have boned up on his Supertramp before deciding to make the comments that he recently made at the Tiburon CEO Summit, an annual conference of money managers held in San Francisco.

Although the summit’s content and speaker presentations are supposed to be confidential, therefore allowing the free exchange of ideas, criticisms and concerns in the industry to fully air, word of Ken Fisher’s comments were soon exposed via social media.

And when the word got out about what Fisher had said, well, that’s when things really turned ugly for the billionaire founder and chairman of Fisher Investments.

According to a recording of the comments that was obtained by CNBC, Fisher made what many considered to be highly inappropriate, offensive and sexist comments that compared money managers’ trying to land clients to men trying to persuade a woman to have sex.

Here’s how CNBC wrote it:

“Money, sex, those are the two most private things for most people,” so when trying to win new clients you need to be careful. He said, ‘It’s like going up to a girl in a bar … [inaudible] … going up to a woman in a bar and saying, hey, I want to talk about what’s in your pants.’”

Since the comments by Fisher surfaced, his money management firm has lost more than $2 billion in assets. Already, five high-profile pension funds that had hundreds of millions of dollars invested with Fisher jumped ship. Then, in a stunning blow for his firm, Fisher lost the support of brokerage giant Fidelity Investments. The company reportedly terminated a $500 million relationship with Fisher Investments.

Now, the important thing for you, The Deep Woods reader, to be aware of is that over the past several years, the entire climate for free speech and what can and cannot be said has changed.

Today, you cannot make an “off color” joke, or a sexual innuendo, or even any kind of slightly inappropriate comment — either in public or semi-privately — without the chance of incurring a blowback.

In the case of Ken Fisher, his remarks were supposed to be kept confidential by the attendees of the Tiberon CEO Summit. However, they weren’t. In fact, the reason we even know about his comments is due to a phenomenon that’s arisen in the past couple of years known as “call-out culture” or “cancel culture.”

Basically, call-out culture is a form of public shaming that aims to hold individuals and/or groups accountable for their actions by calling attention to behavior that is perceived to be problematic. Furthermore, the call-out is usually done via social media.

The call-out here in this case came from Alex Chalekian, a money manager who runs Lake Avenue Financial. Chalekian was at the conference and heard Fisher’s speech. Then, he posted a video about the situation on Twitter with the words “I’m truly disgusted.”

The video then went on to describe some of Fisher’s comments, including references Fisher had made to “genitalia,” “picking up on girls,” references to “Jeffrey Epstein” and “tripping on acid” and “other inappropriate comments.” Chalekian also said he spoke with many of the women at the conference who he said told him that the comments Fisher had made were “one of the reasons they don’t like coming to these conferences as it makes them feel uncomfortable.”

In the video, Chalekian then went a step further by saying that after he talked to others at the conference, he found out that, “Ken Fisher is actually known for making these types of comments around the workplace with his employees. One of his past employees told me that he [Fisher] had made a comment to them talking about the fact that he thinks slavery should have never been abolished.”

The result of Chalekian’s Twitter video has been a major wound to Ken Fisher’s business and the bleeding is likely far from being stanched.

Now, I am in no way supportive of what Ken Fisher allegedly said. I don’t personally know Ken Fisher, although I do have a former colleague who has worked for Fisher for about the past decade. And, I don’t know Chalekian. I had never heard of him or Lake Avenue Financial until this incident. So, I have no dog in this fight.

What I want you to learn from this is that, given today’s call-out culture, it makes little sense to utter even the hint of an off-color remark or anything that can be perceived as an insensitive comment — especially if you are doing so in a public forum, or on social media or even anytime you put anything in writing (e.g. a text message to a friend, an email joke to a colleague, etc.).

Now, that’s not to say you shouldn’t speak your mind about the critical issues that you are passionate about. You definitely should. I do that every week in this publication, and I have zero plans to temper any of my sometimes uniquely, non-mainstream, non-politically correct thoughts.

Yet what you won’t find in this column is any racist, misogynist, offensive or otherwise off-color language that can be used to “call me out.”

My arguments, and I hope your arguments as well, on any issue are based on evidence, logic and philosophic principles which state that reason and a fealty to reality are prime directives. You may disagree with my conclusions, fair enough. But you will not get far by trying to paint me into some pre-ordained enemies list.

For anyone trying to make a point in society, or for anyone trying to just have a good conversation with others, make sure your comments — public or private — comport with the best within you. If they don’t, and if you utter the sort of remarks that Ken Fisher allegedly has, then you’ll likely be punished for it.

ETF Talk: A Door into the European Equity Market

The WisdomTree Europe Hedged Equity Fund (NYSEARCA: HEDJ) is an exchange-traded fund (ETF) that provides investors with exposure to the European equity market while also hedging against possible fluctuations between the dollar and the euro.

This exchange-traded fund is based off the WisdomTree Europe Hedged Equity Index that is designed to track the share price moves of dividend-paying companies in the WisdomTree International Equity Index that derive at least 50% of their sales from exports outside of the euro zone. The presence of a currency hedge also matters because there is always the possibility of large movements in the exchange rate between the dollar and the euro.

At a time when the German economy is in recession, the imminent deadline for Brexit is fast approaching and populist politicians and parties are gaining sway across the continent. With that backdrop, prospective investors in the European economy need all the protection that they can get. 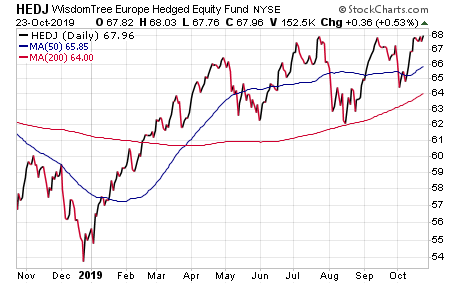 The fund currently has $3.36 billion assets under management and an expense ratio of 0.58%, meaning that it is slightly more expensive to hold in comparison to other exchange-traded funds. This fund’s performance has been quite good in the long and short runs. As of Oct. 22, HEDJ has jumped 0.65% over the past month and 1.74% in the past three months. It currently is up 21.87% year to date.

In short, while HEDJ does provide an investor with a chance to profit from the world of euro zone companies, the sector may not be appropriate for all portfolios. Thus, interested investors always should conduct their due diligence and decide whether the fund is suitable for their investing goals.

The Importance of Helping, and Turning Ideas into Successful Companies

When you meet one of the nation’s leading entrepreneurs in the cannabis jungles of Colombia, you know the conversation is going to be interesting.

That’s where I met my latest Way of the Renaissance Man podcast guest, Craig Huey, the founder and president of Creative Direct Marketing Group.

Craig is recognized as one of the world’s leading experts in marketing and advertising, and he’s helped turn countless small companies into multimillion-dollar corporations by using his expertise in direct response marketing, targeting strategy and accountable advertising.

In this episode, you’ll learn why both Craig and I think the key to being successful is to know your productive purpose in life and to figure out how to implement your vision for helping others.

You’ll also find out why capitalism is such a conducive economic and political system for those who seek a mutual exchange of values.

Plus, find out about Craig’s latest book, which is a thoughtful critique of the current “Deep State” environment in Washington, D.C., and why this environment is so toxic to freedom.

I absolutely loved my conversation with the eminently intelligent and entertaining Craig Huey, and I know you will too.

“Men go crazy in congregations. They only get better one by one.”

I believe that when people start thinking along with a group, they stop improving their independent thinking skills. If you want to make real progress in life, a good way to do so is to separate yourself from whatever groups you belong to and reevaluate if what that group says comports with what you actually think. If it does, then by all means return to that group. If not, then go your own way. Whatever your conclusions, at least you’ll know you reached them independently.