The Best Idea from the State of the Union

The Best Idea from the State of the Union

It is not often that I hear a great idea from any president during the State of the Union (SOTU) address. The reason why isn’t because presidents are bereft of ideas. The reason why is because the SOTU isn’t really a forum for ideas. It’s more of a chance to promote what has been accomplished and to market what that president wants to do in the years ahead.

And while last night’s SOTU was a marvelous marketing event for President Trump, who has proven himself a master marketer/communicator, this year the president also injected the best idea into a SOTU that I’ve heard in some time. Here’s the line that caused me to direct my free-market rabbit ears toward the TV:

“No parent should be forced to send their child to a failing government school.”

The president fired this salvo as a way to breach the subject of expanding school choice options for all American children. And because President Trump is a master marketer, he did so with the aid of fourth grader Janiyah Davis, who also happens to be stuck in a low-performing school in Philadelphia.

Then the president donned his Oprah Winfrey giveaway hat when he told Davis and her mother, who were in the audience in the House chamber, that she would be receiving a scholarship to attend the school of her choice.

Now, one may love or hate the theatrics involved here, but from my perspective, the theatrics are of far less significance than the overt sentiment which states that America’s children shouldn’t be forced to be educated by failing government schools.

I’ll go a step further, as I usually do, and say that there should be no such thing as government schools.

I think it’s funny, and the height of irony, that all the Democrats who are running for president have said that workers need to be paid more and that everyone who works should be paid a “living wage.” Yet for a worker to warrant a good-paying job in the real world, that worker has to have the skills and the ability to merit that higher wage. The problem, of course, is that many workers simply do not have the skills.

But why not? Why do so many Americans lack marketable skills and the skills needed to command a bigger paycheck?

One reason why is because they’ve been educated in failing government schools.

Think about it. Most people in the workforce have a high school diploma. Moreover, many people also have a college degree. Yet many of them lack the skills to make more than minimum wage. Does that not tell you everything you need to know about the failure of government schools? I think so.

Now ask yourself this: Why are government schools failing? Is it because there’s not enough money in the system? No.

I submit to you that the reason why there are failing government schools is because public schools represent the mediocrity that’s woven into the fabric of any government-sanctioned monopoly.

When there is no competition present in an industry, the monopolistic entity can simply get away with failure. That industry never has to change, never has to innovate and never really has to really care about results.

Another way to describe this problem is that big organizations are usually averse to change (most people are, too). That means they won’t change unless they need to in order to survive. In business, we either adapt, innovate and provide value to customers — or we perish.

In a government school where there is no competitive alternative, there is no need for improvement or innovation — and thus you get stagnation, mediocrity and failure.

It is this idea, the idea of free-market education and the failure of monopoly, that President Trump promoted last night in the SOTU. And it is this free-market notion that America needs more of if we want to prevail as the free nation that we are — and that I hope we can continue to be.

The ARK Next Generation Internet ETF (ARKW) is an actively managed fund with a broad mandate to invest in companies that its managers have identified as benefiting from an infrastructure shift away from hardware and software toward cloud and mobile.

Next Generation Internet’s wide-ranging directive does not limit its investments by geography or by industry. Instead, the fund’s managers are tasked with identifying companies they view as engaged in the next generation of internet evolution.

Broadly speaking, the ARKW’s managers appear focused on big, recognizable buzzwords such as “internet of things,” “cloud computing,” “digital currencies” and “wearable technology.” Stocks of companies that fit ARKW’s investment profile are expected to benefit from shifting technology infrastructure to the cloud. That transition will enable mobile, local and new services, including those provided by companies that rely on or benefit from the increased use of shared technology, infrastructure and services, internet-based products and services, new payment methods, big data, the internet of things and social distribution and media. 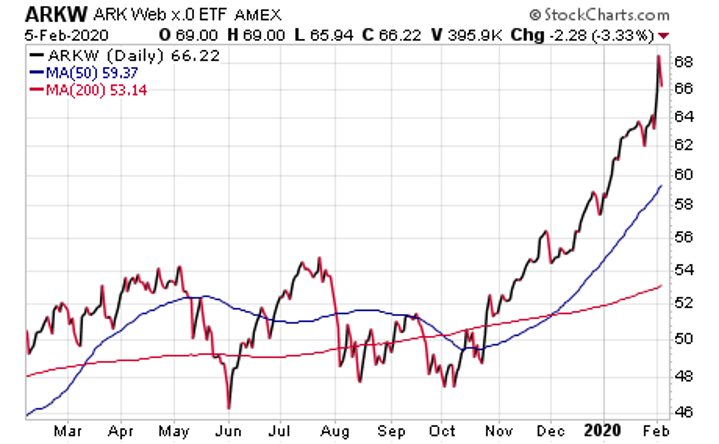 While the fund’s focus may be appealing for investors who believe in the value of these new technologies, portfolio implementation is a more difficult task. Most of the companies that are developing these advancements are huge corporations whose nascent technologies make up only a small fraction of total revenues. As such, it is very difficult to get pure-play access to ARKW’s targeted technologies. So, be sure to confirm that the fund’s holdings — not just its thesis — align with your view of the space.

“I love it when you and Rich nerd out on investing.”

That’s what one of my readers told me yesterday after listening to the teleconference, “A Golden Vision for 2020.” This is the event I’ve been promoting to readers of this publication, as well as subscribers to my newsletter advisory services, and I must say that the call exceeded even my wildly optimistic expectations (and you know I am nothing if not brimming with optimism).

Now, if you weren’t in on the call, well, you missed out on something special. Fortunately, I persuaded my publisher to make a replay of the call available to The Deep Woods’ audience today.

Perhaps more importantly, I persuaded my friend and co-host for this event, Rich Checkan of Asset Strategies International (ASI), to continue offering one of the best values in the physical gold and silver market today.

So, if you missed our special teleconference yesterday, “A Golden Vision for 2020,” then now is the time to listen to the audio replay. And, most importantly, it’s not too late to get in on one of the best deals I’ve ever heard of when it comes to buying gold coins and physical silver at a majorly discounted price — a price offered ONLY to readers of my publications.

Simply click here to listen to the replay of this teleconference.

To speak directly with Rich at ASI and get in on this offer right now, simply call him at (800) 831-0007 and mention the teleconference.

When you’re a high school student fortunate enough to get an internship with NASA during the Apollo 11 mission, you get to see true human achievement up close and personal.

That’s one of many fascinating anecdotes you’ll hear about in the latest episode of the Way of the Renaissance Man podcast, as I speak with my friend and fellow human achievement lover Edward Hudgins.

Ed is a passionate intellectual activist who promotes reason, freedom, individualism and capitalism through his work as the research director for the Heartland Institute, one of the world’s leading free market think tanks. 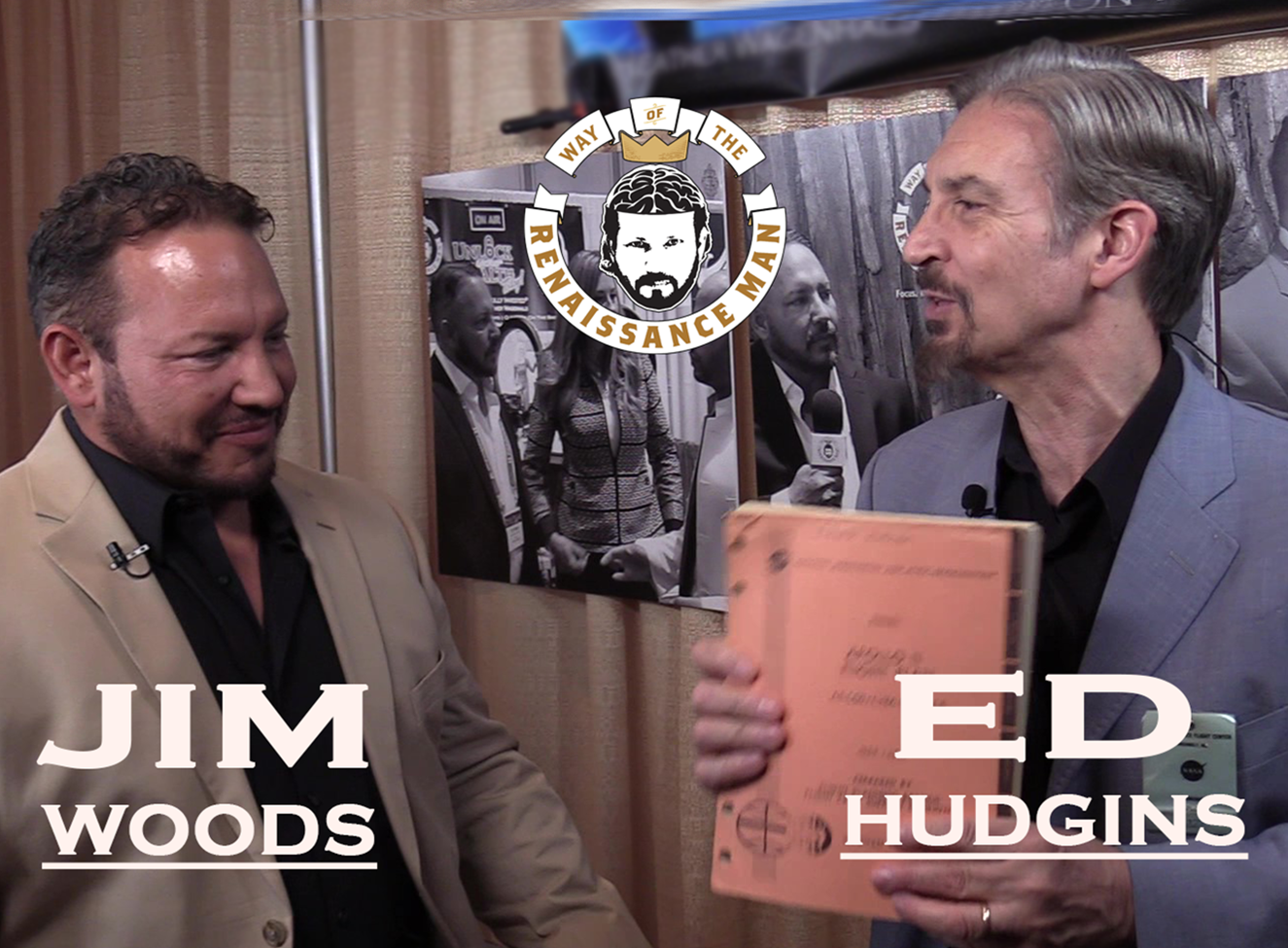 Some of the diverse topics discussed in this episode include transhumanism, the development of a neural net, the latest anti-aging science and the brilliance of science fiction writer Arthur C. Clarke. You’ll also hear Ed’s sharp critique of the American education system.

Yet the primary focus of this episode is the advocacy for creating what Ed calls “Human Achievement Day.” That’s a day designed to remind people of how brilliant the mind in action can be, and what better day to do that than on July 20, the anniversary of the day humans first landed on the moon?

If you want to hear two “space nerds” talking about man’s greatness, then this episode is just for you.

The Wisdom of ‘Why’

The poetic lyrics of Americana singer/songwriter Josh Ritter are replete with wisdom, and in his 2012 song “Why,” that wisdom is on full display. Here, Ritter questions the longing of hope and despair, and promotes action and confidence as an alternative. I very much love this perspective, as it comports with my advocacy of the principle of choosing to live your best life. So, whenever you are feeling down, remember the “Why.”