You might find this hard to believe, but the iconic New Jersey rocker Bruce Springsteen never had a number one record. Well, sort of.

You see, Bruce’s childhood memoir masterpiece, “Blinded By The Light,” did reach number one on the charts, but not in its original form (find out the real story behind the song and its unconventional lyrics straight from Bruce).

The song actually first appeared on Springsteen’s 1973 debut album, “Greetings from Asbury Park, N.J.” Yet, it was the 1976 cover version of the song by British rock band Manfred Mann’s Earth Band that reached number one on the Billboard Hot 100 in the United States in February 1977. 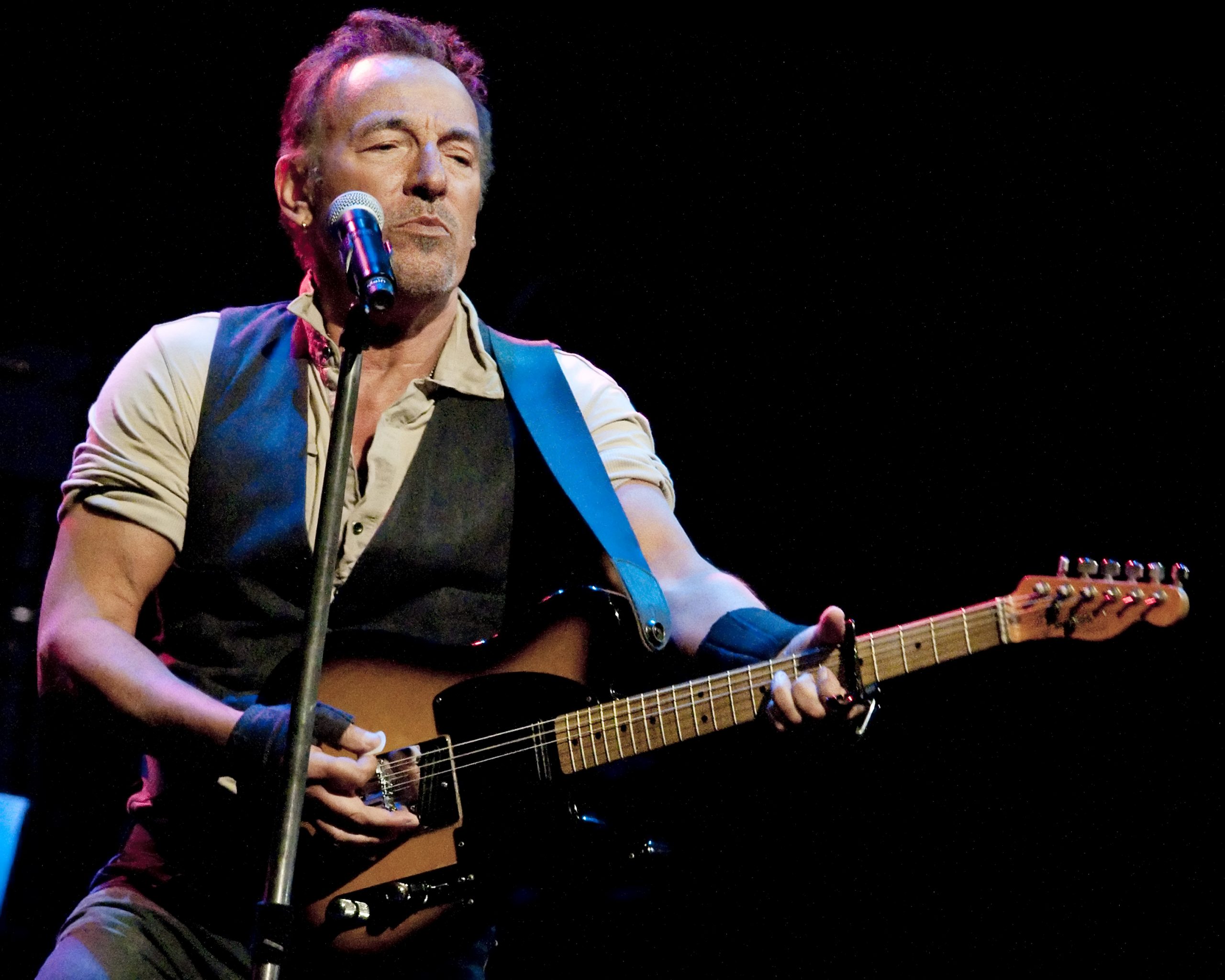 So, why am I bringing up rock history here in The Deep Woods?

Well, aside from the fact that the subject is fun to discuss, the meaning of the song, and its history on the Billboard charts, can teach us some important lessons about the markets, investing and life.

First, when Bruce wrote his story about being “blinded by the light” of the new and the unknown, and wanting to, as he puts it, “do things I hadn’t done and see things I hadn’t seen,” he didn’t envision the song being covered by a band across the pond. He also didn’t think that song would become a number one hit.

Yet, that’s the thing about life, most of the time we don’t know where our choices will lead us. Even seemingly pedestrian choices can have giant ramifications for our lives, and we never really know which of those everyday decisions will end up morphing into life-changing circumstances. So, the lesson here is to always choose wisely no matter how seemingly insignificant your decision may be, as you never know the causal significance it could have.

He was just blinded by the light

Cut loose like a deuce another runner in the night

Blinded by the light

Whoa, but mama, that’s where the fun is…

— Bruce Springsteen, “Blinded By The Light”

Second, when Bruce wrote about his desire to do things he hadn’t done, see things he hadn’t seen, and allow himself to look into the sights of the sun (because that’s where the fun is), I doubt he realized that this would be a profound lesson for investors.

You see, in February and March of 2020, many investors were “blinded by the light,” and not in a positive way. In fact, many were blinded by the market turmoil occurring during the beginning of the pandemic, and many pulled their money out of the market and went to cash.

Now, this was a smart move for several months; however, the pernicious, COVID-19-inspired selling in markets blinded many an investor into staying on the sidelines well into the big rally and economic rebound that, despite the rocky first quarter of 2022, is still going today.

The lesson here for investors is to not allow yourself to be blinded by the often-intense light of fear in markets.

Indeed, one of the biggest problems I encounter when talking to investors is not that they are too aggressive with their money, but that they aren’t even in the market because they want to avoid experiencing another Q1 2020 sell-off. Some investors are even still on the sidelines as a result of fear of another 2008-2009 financial crisis.

In this case, you don’t want to be blinded by the light of fear. Instead, you want to move toward the light of future possibilities, and you want to put your money to work in the investment vehicles best suited to serve your particular circumstances and goals.

So, if you are still leery about getting in this market, I implore you to shed the fear of a tired bull. Allow yourself to look into the sights of the sun and the brightness of opportunity and embrace the potential upside — because as Bruce told us, “that’s where the fun is.”

You know, with his outlook on life, and his famous work ethic, I think Bruce would make a great fund manager.

The First Trust Natural Gas ETF (NYSEARCA:FCG) tracks U.S. companies that derive a substantial portion of their revenue from the exploration & production of natural gas.

FCG is the first exchange-traded fund (ETF) of its kind, giving a dedicated exposure to the U.S. natural gas market. Fortunately, the fund does a sufficient job of capturing the concentrated space.

The fund selects from companies that are involved in natural gas in some capacity, dedicating 15% of its portfolio to master limited partnerships (MLPs) and the remaining 85% to equities. It then applies linear cap-weighted rankings to each bucket.

The index is constructed by establishing the universe of U.S. listed stocks of companies involved in the exploration and production of natural gas. Companies whose natural gas reserves do not meet certain requirements are eliminated.

The index is designed to track the performance of mid- and large-cap companies that derive a substantial portion of their revenues from midstream activities and/or the exploration and production of natural gas.

Weights within each segment are scaled so that the largest weight is a multiple of the smallest weight. The Index is optimized for liquidity and market capitalization at the component level. 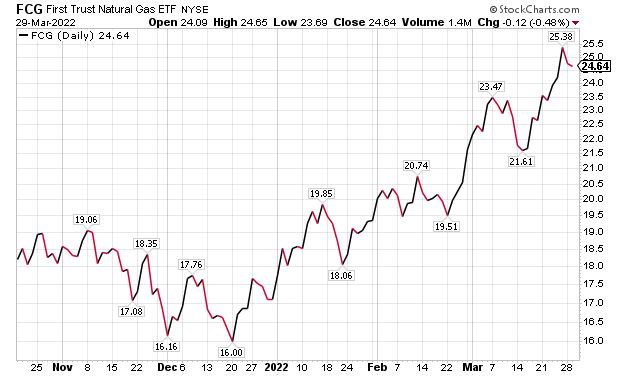 Average daily trading volume and market cap are factored in both selection and weighting. The resulting portfolio is a near-perfect representation of the market. The index is rebalanced and reconstituted on a quarterly basis.

The rise in Treasury yields has accelerated, and the Fed is using essentially every opportunity to tell the public that interest rates are going to rise even more in the coming months.

So, as we all embark on this potentially steep rise in rates, I wanted to take a minute to see what effect rising rates have had on the “real economy,” because one of the biggest risks to the market right now is an economic slowdown — and understanding when rates reach a level where that might occur is very important.

But before we dig into the details here, I want to tell you that today’s issue is an excerpt from my daily market briefing publication, “Eagle Eye Opener.”

The “Eagle Eye Opener” is a collaboration between myself and my “secret market insider,” a man who delivers institutional research to some of the biggest names in the professional investing industry, but who also shares with me some of his insights — which I share with you each morning in the “Eagle Eye Opener.”

With the exception of the 30-year mortgage (which arguably is the most important of these consumer loans), none of the other major consumer loans are meaningfully above levels seen in January 2021, when economic growth and inflation were both more subdued.

5/1 ARMs, HELOC rates, car loans and credit card rates are all essentially at the same place they were in January 2021, and in all these cases they are below levels in January 2020 (pre-pandemic), a time when consumer balance sheets weren’t as strong as they are right now.

Now, mortgage rates have risen, and they are above pre-pandemic levels. But they are still well below the January 2019 levels, and that’s notable because early to mid-2019 was the last time we saw a meaningful loss of economic momentum, which prompted the Fed to halt balance sheet reduction and rate hikes in mid-2019.

The bottom line here is while Treasury yields have risen, causing mortgage rates to accelerate, the majority of other important consumer loan rates have not risen substantially.

So, what does this mean for financial markets?

We and others have said consistently that Fed rate hikes eventually choke off economic growth, but how many hikes and how long it takes is a function of 1) How low rates are at the start and 2) How strong growth is when rates begin to rise.

Right now, rate “lift off” is starting very low and economic growth remains very strong, and this analysis of consumer loans reinforces this point: It’s going to take a while for the Fed to choke off the economic recovery, even if they raise rates 50 basis points at the next Federal Open Market Committee (FOMC) meeting in May.

Bottom line, interest rates are rising, and they will continue to become a stronger and stronger headwind on the economy and the markets. However, they aren’t near levels yet that would imply economic growth is stalling. That’s why, despite many risks facing markets, we’re sticking with equity allocations — because we could still have a year (or more) of economic expansion left (although that might be too optimistic, but we’ll be watching and, of course, let you know if something changes).

For now, the risk of stagflation (meaning high inflation and stagnant economic growth) remains a future problem, not an imminent one.

Once again, for more insights from my daily market briefing, Eagle Eye Opener, I invite you to check it out today.

When Silence is Lying

“We hold our heads high, despite the price we have paid, because freedom is priceless.”

The Polish statesman, dissident and Nobel Peace Prize laureate is a pivotal figure in the history of Europe, as he was the first democratically elected president of Poland since the 1920s. His fight for freedom and autonomy over communist forces should be an inspiration to us all, especially in light of the current events in Ukraine. And as Wałęsa reminds us, whatever the cost, freedom is priceless.