Some Kind of Wonderful

Today, I watched something wonderful.

That something was the second space flight of Blue Origin, Jeff Bezos’ company that is dedicated to making space travel a commercial venture for individual citizens, not just professional astronauts.

One citizen of note on this flight was a man who’s acutely associated with space, and he is Captain Kirk himself, “Star Trek” actor William Shatner. 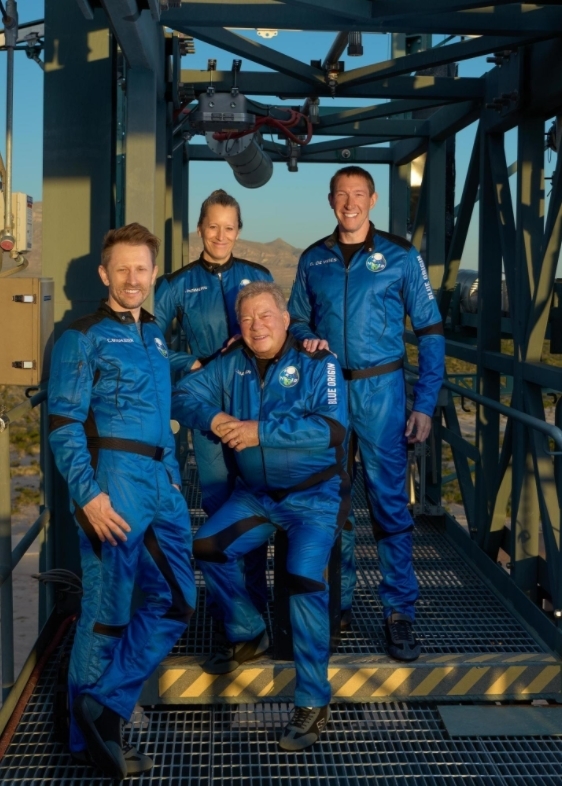 Shatner is an extremely engaging man. I found that out firsthand a few years ago, as he was one of the keynote speakers at the FreedomFest conference, the annual celebration of free minds and free markets that I implore you all to attend. It is by far the best week of every year.

I recall Shatner speaking passionately to me about horsemanship, as we share a common love of knowing how to direct our steeds to behave in precisely the way we want by using just the right amount of subtle rider persuasion. Learning this difficult skill takes time, effort and passion, and it was nice to find that we shared this equine love.

Based on my past engagement with Shatner, it came as no real surprise to me that he was brilliant and engrossing immediately after exiting the Blue Origin capsule upon its return to Earth. Here’s what he told Jeff Bezos after the two exchanged an emotional embrace:

“What you have given me is the most profound experience I can imagine. I hope I never recover from this.”

I don’t know about you, but I want to feel that wonderful, too.

I agree. And, when the time comes that I get the opportunity to take a Blue Origin flight, you had better believe I am going to suit up and be first in line for the ride.

Now, the emotional power of Shatner’s words really stuck with me, and the reason why is because everything about this event is what makes humankind so great.

First and foremost, the launching of a manned rocket into space, and then the safe return of both the rocket booster and the capsule containing the crew is the quintessence of reason in action.

Think about the time, mental calculations, capital, knowledge, scientific discoveries, human ingenuity, courage and grit it takes to accomplish such a feat. To achieve this task is a validation of man’s ability to command nature, reorder and reorganize its constituent parts, then recreate reality based on his values.

If you are the type of person who laments the current state of society, as I am, for much of its obvious absurdity, today’s Blue Origin flight should serve as a glowing tribute to what’s possible when mankind is at its collective best.

So, to Jeff Bezos and Captain Kirk, thank you for showing us some kind of wonderful.

Thank you for demonstrating man at his best, the man of the mind, the man of reason, and of reality, of science and of achievement.

I raise my glass in a toast to this “kind of wonderful.”

The SPDR S&P Biotech ETF (NYSEARCA:XBI) seeks to provide investment results that, before fees and expenses, correspond generally to the total return performance of the S&P Biotechnology Select Industry Index.

The exchange-traded fund (ETF) seeks to provide exposure to the Biotechnology segment of the S&P TMI, which comprises Biotechnology sub-industries that combine to track a modified equal-weighted index. The ETF offers the potential for unconcentrated industry exposure across large-, mid- and small-cap stocks.

Since the fund equal-weights its portfolio, it in turn emphasizes small- and micro-caps and greatly reduces single-name risk. Thus, the weighted-average market cap is much smaller than some competitors’.

Unlike other funds in this segment, XBI is a pure biotech play, with relatively small pharma overlap. The index is rebalanced quarterly. Plus, the fund allows investors to take strategic or tactical positions at a more targeted level than traditional sector-based investing.

XBI trades around $124 a share and has a 0.24% dividend yield. It also has a 0.2% average spread, 189 holdings and a 0.35% expense ratio, meaning it is relatively inexpensive to hold in comparison to other exchange-traded funds. 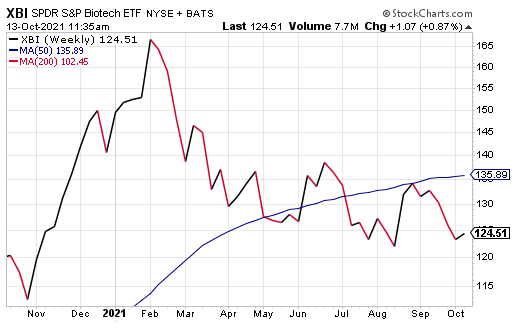 Although XBI’s share price has been in a bit of a slump, this gives potential investors a great opportunity to buy shares in this hot ETF at a discounted price.

However, as with any opportunity, I urge all potential investors to exercise their own due diligence in deciding whether this fund fits their own individual portfolio goals.

The Way of the Renaissance Man podcast is all about conversations with interesting people who have a true passion for what they do.

In the latest episode, I speak with just such a person, and she is Nermine Rubin, founder & CEO of Water 4 Mercy.

Water 4 Mercy is a nonprofit organization with a mission to provide a “One-Two-Three Solution” to permanently end thirst, hunger and poverty in our world. 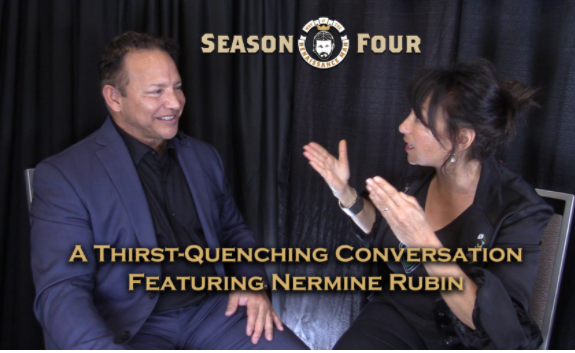 Through the use of innovative technologies and partners, and with a whole lot of love and passion, Water 4 Mercy provides clean water, agriculture and educational solutions to areas in Africa that need it most.

In this interview, you will see for yourself how passion, dedication and knowledge can be focused to solve a very serious problem. And in doing so, you’ll see how one person can spearhead a movement that makes the world a better place.

I really enjoyed this heartfelt conversation with Nermine Rubin, and I suspect you will too.

In case you missed it in my Oct. 6 e-letter…

Defending the Most Hated Man in America

“When both sides of the political aisle are gunning for your company, you know you are doing something right.”

This Wall Street maxim is one that I created a few years ago, and I created it for times when seemingly the entire world has its sights trained on one company and/or one individual. Today, that company is Facebook, Inc. (NASDAQ:FB), and that individual is the company’s not-so-sympathetic billionaire founder and CEO, and what appears to be the most hated man in America, Mark Zuckerberg.

Indeed, there has been a deluge of negative press on Facebook over the past several days, including the revelations of a Facebook whistleblower, first on “60 Minutes” Sunday and then in front of a Senate subcommittee Tuesday.

That Senate subcommittee hearing, which was revealingly titled “Protecting Kids Online: Testimony from a Facebook Whistleblower,” also happened to coincide with an outage of approximately six hours on the Facebook platforms, which include both Instagram and WhatsApp.

Now, here is another Jim Woods maxim: “Whenever the government wants to intervene in the lives of free people, it does so in the name of protecting kids.”

The subcommittee co-chair, Sen. Richard Blumenthal (D-Conn.), did his best to conflate Facebook with another so-called “evil” industry, by saying, “Facebook and Big Tech are facing a Big Tobacco moment.” Sen. Roger Wicker (R-Miss.) used similar language, saying, “The children of America are hooked on their product.”

Yet, it’s interesting to find out what all the fuss was about, as Haugen’s revelations were, to me, and I say this with all sincerity… no big deal.

First, she said that Facebook and Zuckerberg put profits before “safety,” whatever that means. Even Haugen had little concrete information regarding that, but that didn’t stop her from making the accusation. Here again, “protecting kids” from their own free choices to use a legal product is somehow now endangering their safety.

Oh, and as a Facebook shareholder (which you are, too, if you own any big equity mutual fund, exchange-traded fund (ETF) or investment that has exposure to the tech sector, the S&P 500 or Nasdaq 100), I demand that the company be first and foremost concerned with maximizing profits.

It’s not only the company’s fiduciary duty to do so, it also is the reason why any investor would choose to own the stock. So, as long as nothing illegal is occurring, which as far as we know is the case, then I want Zuckerberg and Facebook to continue to ruthlessly maximize shareholder value.

Yet perhaps the biggest “bombshell” in the testimony, and the one that has outraged parents, pundits and Facebook critics around the globe, is Haugen’s disclosure that some of Facebook’s internal research showed teenagers, especially teen girls, felt negative after using Instagram.

Hmmm, so the big reveal here is that negative feelings such as loneliness, insecurity, inadequacy, issues over looks, body image and social competition with peers among teenage girls is somehow new?

I have a newsflash for anyone out there who didn’t know this but being insecure and having negative feelings is just a fact of being a teenager. That’s true whether you are a male or female teen.

I mean, don’t you remember? I am in my fifties, and I still remember those teen angst years vividly — and I wasn’t even a social outcast.

Now, does social media and the constant craving of attention in the form of new “likes” and approval from peers represent a prescription for exacerbating teen angst? Probably.

But does that mean that Congress should come in and tell a private company how to run the business so as to minimize the growing pains of teens? I think not.

What this entire episode tells me is that parents, teachers and those responsible for raising children should make a concerted effort to help kids rationally cope with the inherent aches of growing up. And the key concept here is “rationally,” because a child not equipped with proper reason and proper critical thinking tools is much more likely to succumb to the negative feelings that surround him/her.

Finally, I want to say that I am tired of people from both sides of the political aisle trying to blame “Big Tech” in general and Mark Zuckerberg specifically for their failure to get the societal results they desire.

Keep in mind that the battle of ideas has been raging for millennia, and parents have been raising children for much longer, but Facebook has only been around since 2004.

So, I implore those who want societal change to refrain from blaming Facebook and other social media and Big Tech giants for their own failure to adequately make the case for their ideas.

It is not the media that’s the problem, it’s your message.

The brilliant astronomer was the first to prove that many objects previously thought to be clouds of dust and gas and classified as “nebulae” were actually galaxies beyond the Milky Way. This insight expanded the fields of extragalactic astronomy and observational cosmology. More importantly, it expanded human minds to the thought that the universe is much grander than we previously thought. And since his namesake telescope was launched, that insight has proven to be even grander. Man, do I love science!