Today, I am adding a new superhero to my personal pantheon, and her name is Marina Ovsyannikova.

I suspect you know who Marina Ovsyannikova is, although her name might not be at the front of your mind. I also suspect you’ve seen the video of her protesting her employer’s lies and propaganda regarding Russia’s war on Ukraine.

The photo here of Marina Ovsyannikova in all her heroic glory is no doubt already well known to the world. 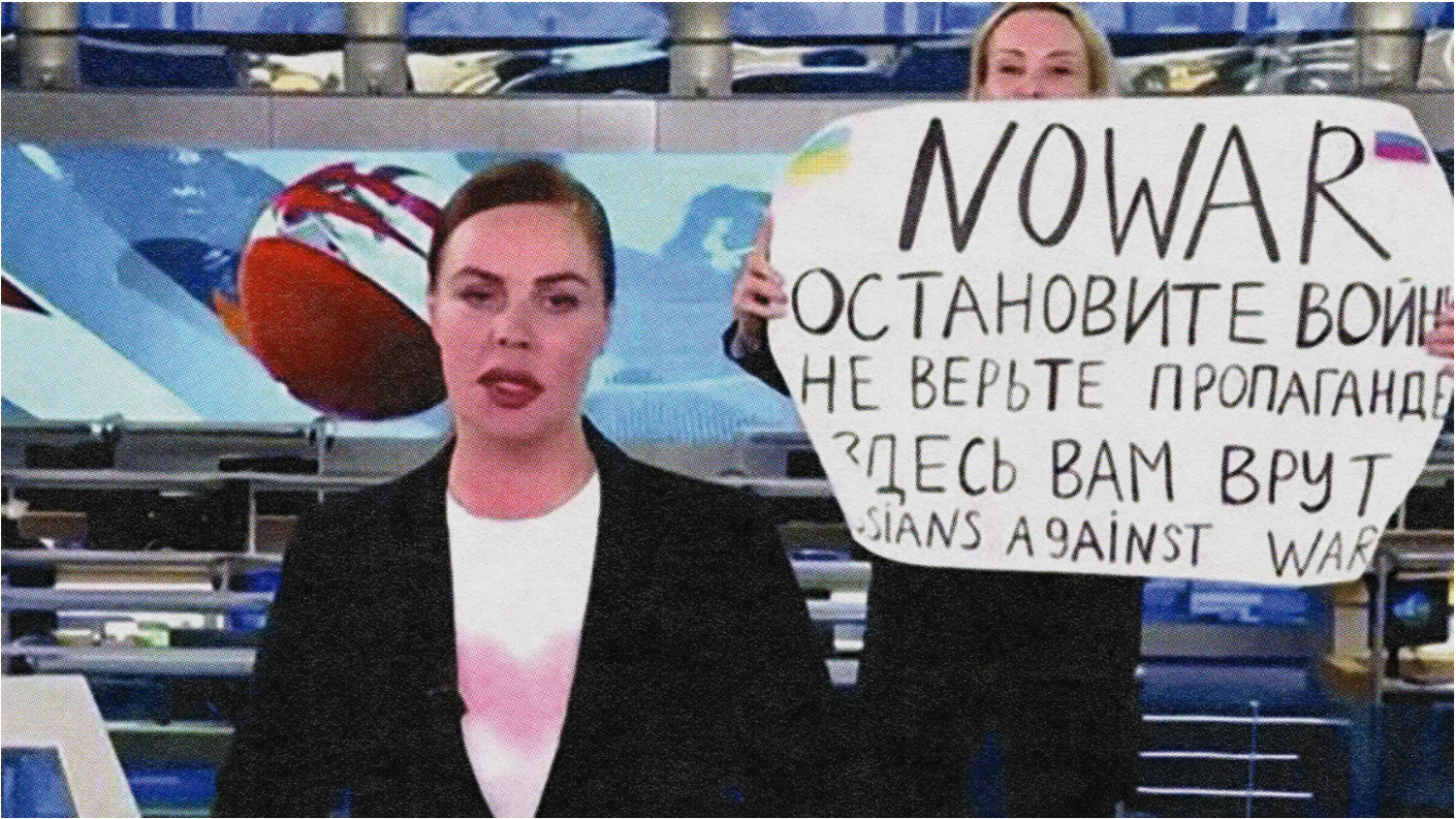 The photo, taken by yours truly, is a screenshot of the March 14, Channel One broadcast (Channel One is the official state TV in Russia, or as I call it, the Putin propaganda network).

Earlier that day, Putin banned access to social media site Instagram from being accessed within the country, which is all part of his crackdown on the dissemination of information to some 80 million Instagram users about the Russian invasion of Ukraine.

Apparently, this was the final straw that led to Ovsyannikova’s brave act of protest, as the editor and producer at Channel One decided she had seen enough, and she devised a low-tech, yet eminently brave and effective form of protest — basically just “photo bombing” the live Channel One broadcast with a sign that translates to: “No war, stop the war, don’t believe the propaganda, they are lying to you here.” The bottom of the poster read in English: “Russians against war.”

As Ovsyannikova, and the world, expected would happen after her act of bravery, she was quickly detained by Moscow police soon after the incident, her fate and punishment at the time unknown.

According to Ovsyannikova, she was questioned for some 14 hours by Moscow police, was given no access to legal help and was deprived of sleep for some two days. She was then released after being found guilty of organizing an illegal protest and fined 30,000 rubles (about $280).

In her pre-recorded video before her act of protest, Ovsyannikova condemned the war on Ukraine and the shame she’s felt for being complicit in the propaganda from Channel One.

Here is the translation of what she said, “Unfortunately, I have been working at Channel One during recent years, working on Kremlin propaganda. And now I am very ashamed. I am ashamed that I’ve allowed the lies to be said on the TV screens. I am ashamed that I let the Russian people be zombified.”

Ovsyannikova went on to say the following powerful words directly to her countrymen, “We are Russian People; we are smart and thoughtful, it is only in our power to stop the madness.”

She concluded with the following heroic plea, “Take to the streets, do not be afraid. They can’t jail us all.”

If the rest of the world had a modicum of the courage, conviction, sense of responsibility and sense of right that this woman has, the world would be a far more beautiful place.

Marina Ovsyannikova, you are my new favorite superhero.

ETF Talk: Invest in Household Names with This Staples Fund

The market has turned away from technology and growth darlings, while value stocks have, on a relative basis, become more prized by investors.

So-called “boring” companies often offer consistent, stable returns, and tend to hold their value more strongly in downturns. However, they are unlikely to offer massive returns over a short time the way some of the tech stocks do.

Still, there is something to be said for sound fundamentals. The consumer staples industry tends more towards “boring” stocks and business models. These stalwart companies, however, provide services that consumers need and will just about always demand, at least in the intermediate term.

They are called “staples” for a reason. Represented industries include food and other staples such as retail, beverages, tobacco and household products.

Perhaps the most “boring” way to invest in these stocks is through Consumer Staples Select Sector SPDR Fund (XLP). The Select Sector funds are well-known in the exchange-traded fund (ETF) space for providing exposure to some of the biggest companies in a sector, and this one is no different. As investing in equities goes, ETFs generally provide a measure of safety and reduce volatility compared to investing in single stocks.

In recent periods — one month, three months, six months, year to date or one year — XLP has outperformed the S&P 500 by two to seven percentage points, and that’s not including its 2.5% yield. This is representative of the investing trend in favor of this industry. Plus, a 0.10% expense ratio of this fund is quite low. 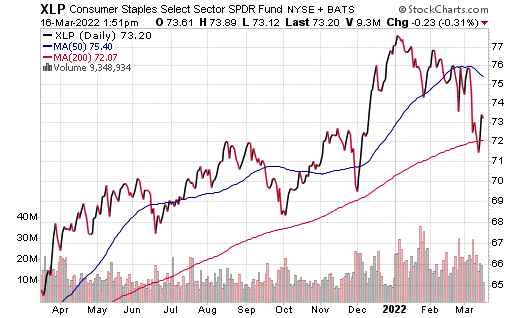 For investors looking for a careful, more stable way to remain invested in equities during this turbulent time, Consumer Staples Select Sector SPDR Fund (XLP) offers just such an ETF.

My lead story two weeks ago, “Praise Capitalism and Pass the Ammunition,” was very well received by readers and by many of my closest friends and colleagues. And while most of the feedback I received from the article was positive, I did get one interesting comment that I wanted to share with you today.

“Jim, that Ammo, Inc. donation to Ukraine is nothing more than a PR stunt.”

That is the comment I received from an acquaintance who never fails to send me critical remarks about my work, but who also somehow seems to read just about everything I write. Now, in thinking over his comment, I came to several realizations about the ideas embedded into his criticism. Because you see, the criticism waged here is not only wrong, but it I think it harbors a misunderstanding of the concept of “selfishness.” Let me explain.

First off, a good act is a good act, regardless of whether there are ancillary benefits to the person taking the action. In fact, I would argue that a “good act” is not one of self-sacrifice, but one that is, in fact, selfish.

Take, for example, one of my preferred charitable donations, the act of giving blood. I am very regular with my blood donations, going just about every eight weeks to have the blood bank extract my rarest of blood types, AB Negative. This donation helps save lives, as blood banks are constantly in need of all blood types, but especially the rarest types.

In my case, donating blood is not a “selfless” act. Rather, it’s a “selfish” act that helps me in both body and spirit while also helping my fellow man. And that is the best possible outcome for everyone. 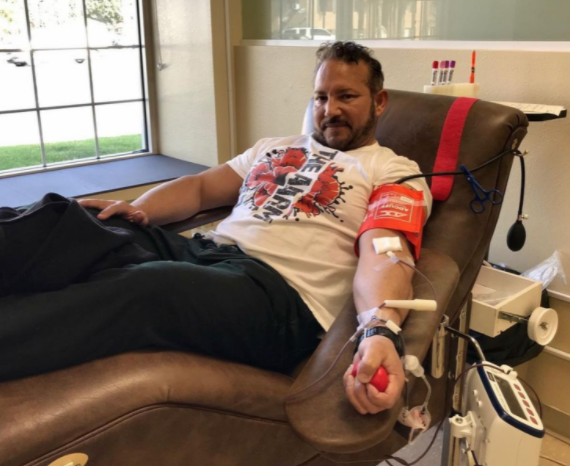 Your editor engaged in the “selfish” act of doing good for society and for himself.

Think of the converse of this situation. Would the act of donating blood only be “good” if I were to suffer negative health consequences as a result of my donation? Put in philosophic terms, would my donation only be moral if it also was self-sacrificial?

My answer is “no,” yet in the history of moral philosophy, I hold a minority opinion.

Now, back to my acquaintance’s comments on the Ammo, Inc. donation to the Ukrainian people of 1 million rounds of ammunition as being “just a PR stunt,” here we see that he also suffers from what I think is misguided ethics. The philosophic subtext of his commentary suggests that the Ammo, Inc. donation would only be “moral” if the company hadn’t announced to the world that they were doing so.

Yet the fact that Ammo, Inc. got a PR boost from its donation in no way negates the goodness of the act. In fact, in my opinion, the positive PR generated by the company’s generous and well-placed gift in support of freedom is not only intelligent, but in its own rational self-interest as an entity. It’s also to the benefit of everyone, because the more news of corporate donations to the Ukrainian cause, the more other companies are likely to act in kind. So yes, I consider it a “selfish” act, as it is in Ammo, Inc.’s rational self-interest, as well as in the rest of the world’s self-interest, to combat the forces of an invading army intent on occupying and subjugating free people.

I think what the world needs more of is people and companies to step up and do “selfish” acts that are in the rational self-interest of us all. By their doing so, everyone wins — and what can be more morally perfect than that?

“There is a certain enthusiasm in liberty, that makes human nature rise above itself, in acts of bravery and heroism.”

The Founding Father could have very well been speaking about Marina Ovsyannikova in his quote here on heroism, as the Russian editor and producer is a perfect example of human nature rising above itself in defense of truth and liberty.