Real Men Check Out of the Hanoi Hilton

What’s the definition of a “real man?”

Is it war heroics under unfathomably horrendous conditions? Is it the ability to carry yourself with grace, humility and optimism through magnificent professional victory as well as heartbreaking loss?

Is it the consistent fight in defense of your principles, even when those principles aren’t always the popular viewpoint among your own tribe? Or, is it the waging of a courageous battle against one of nature’s most malignant diseases?

The Arizona Senator died on Saturday at age 81, and he died as he lived, as a real man who faced his fate — a fate we all shall one day meet — with the characteristic class, humor and fighting spirit he displayed throughout his 36 years in Congress, and throughout five-and-a-half years as a prisoner of war. 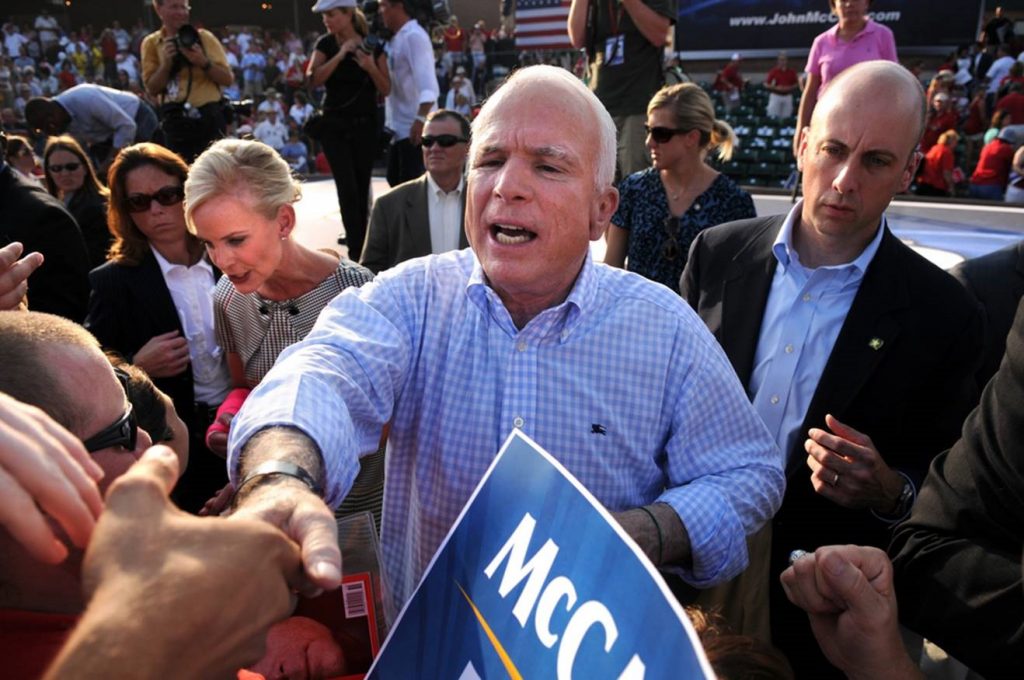 Senator John McCain shakes hands with the crowd at a presidential campaign rally in O’Fallon, Missouri — photo courtesy of Shutterstock.com

Yet for me, what made John McCain a “real man” was something we all get a chance to do in life, albeit in a far less grandiose fashion, and under far less agonizing circumstances.

What I think made John McCain a real man was his ability to mentally check out of the “Hanoi Hilton.”

Yes, that was the name American G.I.s had for the infamous North Vietnamese prison, a place where torture, humiliation, cruelty and the darker angels of mankind’s nature flourished. And, despite John McCain’s literally torturous experience, the man refused to let his mind and his life be crushed by that evil.

Although John McCain’s body was permanently broken from the blows of his jailers, his mind and his spirit remained intact. And though he undoubtedly had to work through the psychological nightmare inflicted upon him, chief of which was the coerced “confession” extracted by his captors, he managed to do just that.

Indeed, John McCain’s ability to check out of the Hanoi Hilton led him to a productive life of public service, not only for his home-state constituents, but for the entire nation.

I think the true lesson of John McCain is the lesson of how a real man (or real woman) responds to the worst adversity in their lives.

We can either submit to the trapping of our captors, or we can work to free our spirits from the bondage of those darker angels and lead a life of heroism, love, honor and productive achievement.

The choice is ours to make… if we have the valor to check out of our own Hanoi Hiltons.

Speaking with ‘The Dollar Vigilante’

Have you even wanted to pick the brain of an “anarcho-capitalist”? I did, and I must say I found the experience extremely interesting.

I am referring here to the latest episode of the Way of the Renaissance Man podcast, an interview with “The Dollar Vigilante” himself, Jeff Berwick. 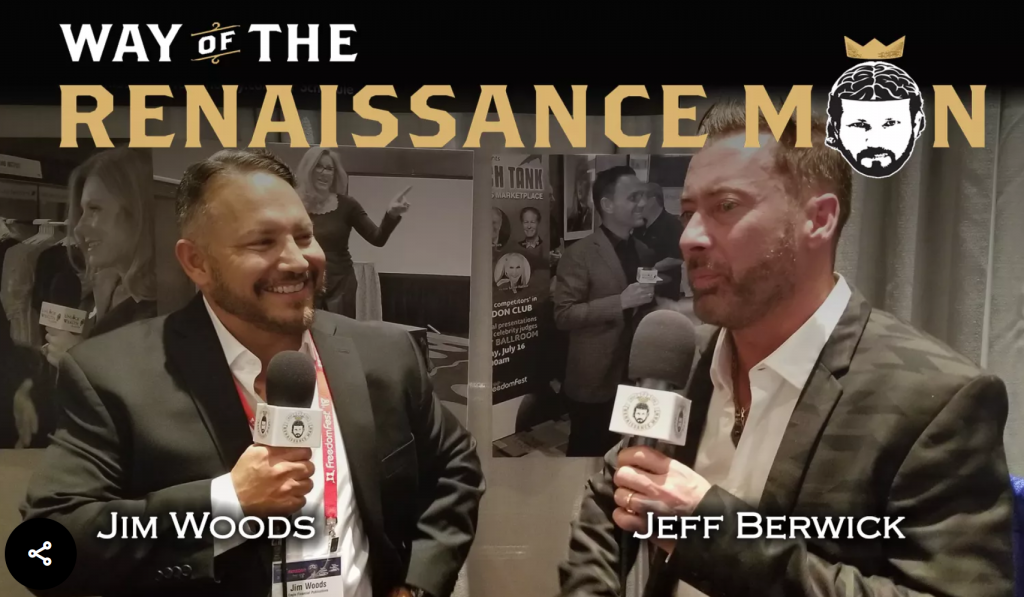 Jeff is an extremely passionate man who takes life seriously, and who also has a lot of fun doing so. Now, if that seems like a contradiction, it’s not. You see, to really enjoy life, we need that productive passion to pulse through our very DNA.

Understanding this concept, and integrating it into one’s life, is something that Jeff does with his various ventures, including his “Anarchapulco” conference, an event he bills as the world’s premiere conference for “Voluntaryist” thinkers and activists.

I really think you’ll enjoy my discussion with Jeff, as we dig into topics such as Bitcoin, the future of cryptocurrencies, what drives a well-lived life and what one can do to integrate and celebrate your passions with others.

SUMO scores are evaluated based on several factors and depend on historical stock prices over multiple periods that take multiple market environments into consideration. The securities with a score in the top 15% of the pool are added to PMOM’s holdings.

Despite being a passively managed fund, PMOM rebalances its holdings monthly during periods of high market volatility. If an individual stock’s score falls from the top 35% during any time of the year, it is removed from the fund’s holdings. The fund invests at least 80% of its net assets, currently around $6 million, in its holdings at any given time.

Although the fund holds both growth and value stocks and has good diversification spread over 138 holdings, it exhibits a clear bias towards large-cap growth equities. Technology stocks make up for nearly one-third of the fund’s total holdings.

PMOM has an expense ratio of 0.29% and has low liquidity (average daily volume is only $4,520), which means it could be difficult for investors to trade the fund at times. 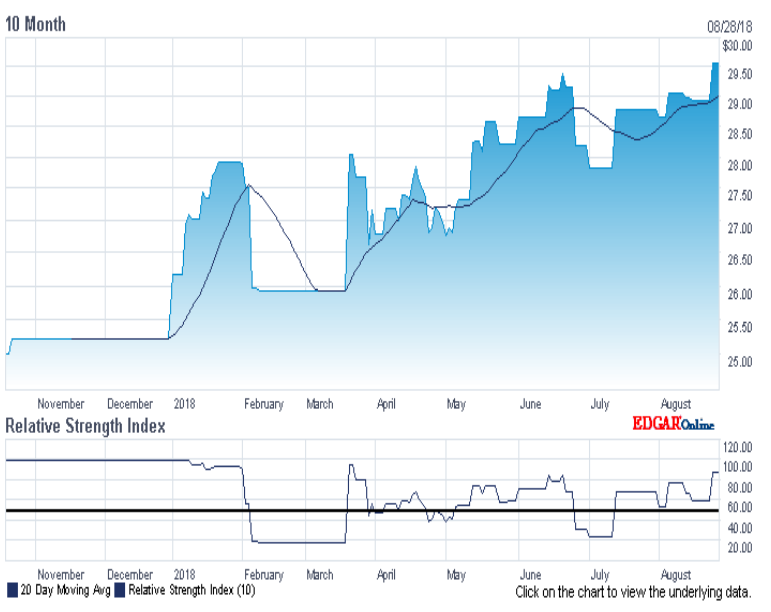 Of the fund’s holdings, 35% are in cyclical sectors such as financial services and consumer cyclical, 30% are in technology, 17% are in industrials and 14% are in more defensive sectors such as health care.

Investors interested in capturing price momentum in a robust U.S. stock market can do their due diligence on Principal Sustainable Momentum Index ETF (PMOM).

Will Politics Slay This Record Bull Market?
Last week, I got a rather frantic phone call from a trader friend of mine who was watching the S&P futures sell off hard. The reason for that selling was the then-just-released dual political headlines that were not at all good for President Trump.

I am referring here, of course, to the guilty verdicts in the trial of Mr. Trump’s former campaign manager, Paul Manafort, as well as the near-simultaneous headline that the president’s longtime personal lawyer, Michael Cohen, had pleaded guilty to eight felonies, including two counts that directly implicated the president in federal campaign finance crimes.

Now, I am not an attorney, so I will leave the question of President Trump’s legal peril to other, more competent observers. Yet what I am an expert in is the financial markets, and the intersection of financial markets with politics.

My trader friend knows this about me, and that’s why he called in a panic as the news was breaking to ask me: “Will these political developments finally slay this bull market?”

It’s a great question, especially considering we have just hit a milestone in this bull market, as it now is officially the longest bull run for the S&P 500 ever. Since March 9, 2000, the benchmark domestic equity index is up some 323%. Of course, eventually, this bull market will end (they all do). 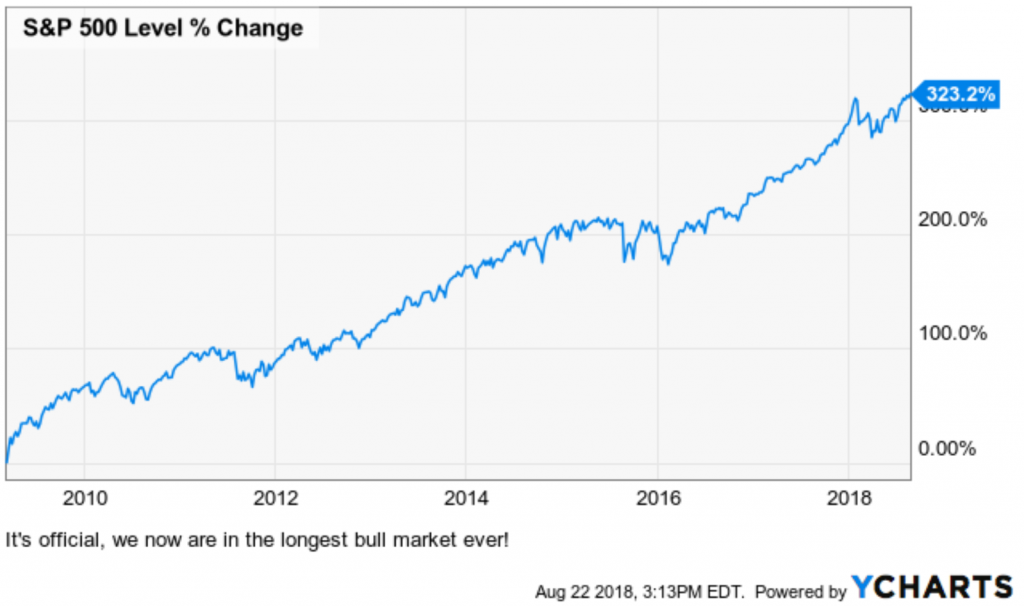 So, could Tuesday’s dark day for the White House be the catalyst that trips up the bulls?

I answered my friend by telling him that indeed, politics can be a catalyst to end bull markets. And, if the current political situation morphs into something very toxic, it would likely cause a flight to safety among the professional money.

Yet what I also told my friend is that it’s important to distinguish the scary headlines from the legal and political realities of this situation.

You see, regarding the Manafort and Cohen headlines, while they will likely dominate the news for some time, these headlines are not, let me repeat, not, a material headwind on stocks at this time.

Now, there are several reasons why the headlines don’t rise to the level of a material headwind. First, regardless of what Mr. Cohen has said, actual proof of criminal activity needs to appear before this situation gets dire for the president. As another friend of mine told me this morning, “Right now, it’s a he-said, she-said situation.”

Second, the ultimate end to this situation is not legal, but rather, political. If things progress here in a way adverse to the Trump administration, then we are talking about going down the impeachment road. But keep in mind, impeachment is primarily a political process, and not a legal proceeding.

Even if Democrats were to win back control of the House and the Senate following the midterm elections, they almost certainly won’t get close to the two-thirds majority needed to actually remove the president from office.

Finally, there’s no critical bull-market legislation that this news can derail. Stated differently, the president has already gotten the biggest driver of equity markets passed into law and on the books, and that driver is tax reform.

So, ironically, the president’s legal and/or political problems may turn out to dampen the administration’s enthusiasm for a trade war, and it might even make a compromise on this issue with China and Europe more likely.

The bottom line here is that the political headlines over the past 24 hours have not yet had a material influence on the markets — and I don’t think the situation, as it stands right now, is a bearish gamechanger for what now is officially the longest-running bull in history.

“Anarchy is the only slight glimmer of hope. Not the popular conception of it — men in black cloaks lurching around with hidden bombs — but a freedom of every man personally for himself.”

The Rolling Stones frontman said this in a 1967 interview, and while I am not an anarchist, the concept here of a “freedom of every man personally for himself” is a concept worth serious consideration. The reason why is because inherent in the concept of freedom is the concept of responsibility — responsibility to act each moment to further one’s goals.

Whenever we make decisions, whether they be major decisions or minor, day-to-day choices, we can either act in the advancement of rational values, or to their detriment. And while we may be free to choose, we aren’t free to escape the consequences of our choices — and that’s where responsibility resides.