‘Paving for Pizza’: A Free-Market Ideal

“But Jim, who would build the roads if we didn’t have government?”

That’s the bromide argument that any free-market, small “l” libertarian like me hears whenever we suggest that government isn’t required to carry out societal tasks such as building infrastructure like dams, bridges and roads.

Of course, most people know that government performs these tasks, and just about every task, inefficiently, expensively and poorly. That’s certainly been the case with roads, as America’s city streets are plagued with a profusion of potholes.

How bad is the pothole situation? Well, according to TRIP, a national transportation research group, my home city of Los Angeles, California, and the surrounding Southern California cities are the worst-ranked when it comes to road conditions.

TRIP reports that 63% of the Los Angeles-Long Beach-Santa Ana area roads are ranked in “poor” condition. Yet lucky for me, my vehicles and the roads I frequently traverse — and lucky for America at large — one company refuses to rely on government to repair damaged roads.

That company is Domino’s Pizza (DPZ), and the fast-food delivery chain has taken it upon themselves to conduct widespread road fixes with its “Paving for Pizza” campaign.

The company is promising to partner with customer-nominated towns to fix potholes, repair road surfaces and to help provide a service that many Americans think of as the exclusive province of government.

Here’s how the Domino’s Paving for Pizza website humorously describes the project’s mission:

Potholes, cracks, and bumps in the road can cause irreversible damage to your pizza during the drive home from Domino’s. We can’t stand by and let your cheese slide to one side, your toppings get un-topped, or your boxes get flipped. So we’re helping to pave in towns across the country to save your good pizza from these bad roads.

Yes, this is tongue and cheek, but there’s nothing funny about the principle being applied here. That principle is economic self-interest, and it’s the easiest answer to anyone who argues that “without government, who would build the roads?”

The answer is: Those with an economic incentive, and those who have an economic self-interest in fixing the roads.

This is true for Domino’s Pizza, and it’s true for all of the nation’s roads, bridges, tunnels, dams, power plants, railways, etc. Those with an economic incentive, i.e. those who benefit most via the acquisition and/or maintenance of profits, can and should be the ones who build out infrastructure.

Infrastructure should not come from big government boondoggle projects that contain earmarks for powerful senators, congressmen and the pet projects in their districts, usually in exchange for a favorable vote somewhere down the line.

Now, when it comes to roads in particular, the reason they exist is to service people’s transportation needs. That need could be getting to and from work or school or getting freight of nearly every variety from one city or state to another. Or, it could simply mean getting a pizza buyer a hot product — without the delivery agent sustaining damage to his vehicle in the process.

Whatever the transportation goal, a free-market alignment of the funding of roads is what will make an infrastructure buildout more responsive to the end users. And just like in the case of Domino’s, the cost of roads and other infrastructure would be borne by those with the self-interest and financial incentive to do so.

Of course, I know the Paving for Potholes project is more publicity stunt than an actual free-market response to our nation’s infrastructure needs. Yet the fact that Domino’s is doing this does serve to demonstrate the principle that government isn’t required to do what people would otherwise do if there were not government involvement in such activities.

For bringing this realization into the public square, I am going to thank Domino’s tonight by ordering an extra-large pie with pepperoni, meatballs and extra cheese.

Finally, if you’re in a libertarian mood after reading my take on Domino’s and Pizza for Paving, then I have an event for you. It’s the upcoming FreedomFest conference, which is just a few weeks away. Here’s are some details on this grand celebration of liberty.

Fast Money Summit and FreedomFest One Month Away!

What to do with some of your profits? How about rewarding yourself and joining other subscribers at this year’s Fast Money Summit and FreedomFest, July 11-14, Paris Resort, Las Vegas? It starts in one month! Over 1,000 people have already signed up for “the world’s largest gathering of free minds.” If you haven’t attended, you are in for a treat, including the Tesla debate. We’ve now posted the entire schedule online at https://www.freedomfest.com/agenda-3/.

Plus, we just confirmed a new speaker. Yeonmi Park, a North Korean defector who has shared her journey to freedom in a book called “In Order to Live,” will give us her views on the impact of the historic summit between President Trump and North Korean dictator Kim Jong-un.

ETF Talk: Invest in Value with This Fund

The Fidelity Value Factor ETF (FVAL) is an open-ended fund that focuses on value investing.

The fund’s objective is to provide returns that reflect the performance of stocks of large- and mid-cap U.S. companies that have attractive valuations. By definition, investors who engage in value investing seek out stocks that trade for less than their intrinsic values or, put more simply, stocks that are undervalued.

The fund’s expense ratio is 0.29%, which is in line with other value-oriented exchange-traded funds (ETFs) on the market. FVAL’s price-to-earnings (P/E) ratio is below 16, while S&P 500 has a P/E ratio of 25.33. Since the P/E ratio is a measure of how much one is willing to pay for each dollar of earnings, these numbers mean that FVAL trades at a significant discount to the S&P 500. 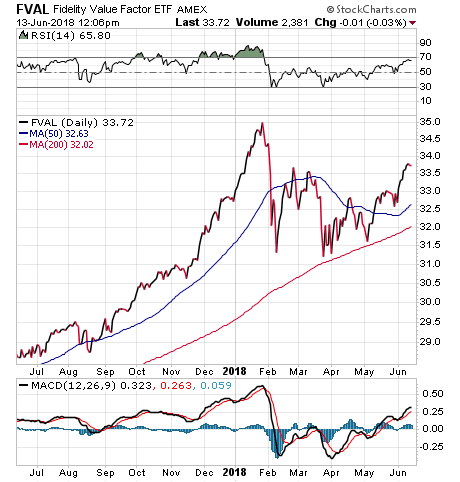 Furthermore, FVAL is 25.73% invested in the information technology sector, 14.16% in financials, 13.51% in health care, 12.77% in consumer discretionary and 10.16% in industrials. The heavy weighting in technology represents a departure from traditional value ETFs, which typically assign their largest sector weight to financials.

For investors who are seeking a fund with potentially undervalued holdings, the Fidelity Value Factor ETF (FVAL) could be well worth looking into for purchase.

Accept Nothing Less Than Full Victory

When it comes to important dates in history, some days are more equal than others. And June 6 is one of those days.

That’s because it marks the 74th anniversary of D-Day, a seminal event in the history of human conflict and the struggle against collectivist tyranny.

It was June 6, 1944. On that day, more than 160,000 Allied troops landed along a 50-mile stretch of the heavily fortified coastline in Normandy, France. They did so, of course, to fight Nazi Germany, and to try to put an end to the existence of one of the ugliest, most philosophically repugnant regimes the world has ever seen.

In his comments about the D-Day invasion, Gen. Dwight D. Eisenhower called the operation a crusade in which, “we will accept nothing less than full victory.” (If you want to experience “goose bumps,” I highly recommend listening to Gen. Eisenhower’s D-Day message for yourself. I assure you it’s two minutes well spent).

In doing so, the United States and the Allied troops sent more than 5,000 ships and 13,000 aircraft in to support the invasion. Close to my heart are the over 13,000 paratroopers from the U.S. Army’s 82nd Airborne and 101st Airborne Divisions.

I say “close to my heart” because today I feel a sense of pride, having also been a member of the elite U.S. Army paratrooper forces, and for also having gone through essentially the same training my fellow paratroopers went through some three-quarters of a century ago. Now, in conducting the D-Day operation, the Allied troops suffered more than 9,000 killed or wounded. Yet it was their bravery and ultimate sacrifice that allowed some 100,000 soldiers essentially to gain a foothold in Continental Europe, literally by the end of that gruesome June day, 74 years ago.

Of course, the battle for Europe had just begun on June 6, 1944, and there was much more death and destruction that followed for both sides. Yet through it all, the United States carried with it the principle that we would accept nothing less than full victory.

That principle, and the relentless mindset it reveals, is really the only way to approach one’s own life.

Think about it: we are born, and from that moment on we are engaged in a battle for survival. As humans, we have no choice but to use our most salient feature to facilitate that existence, i.e. the faculty of reason. That’s why Aristotle called man the “rational animal.”

Our reason allows us to solve problems, and to provide for our basic needs such as food, clothing and shelter. Our reason also allows us to form societies, to write laws that protect individual rights and to understand what’s required to produce the goods and services necessary for that survival.

It is this rational realization that’s led us to what we have today — a capitalist economy fueled by the financial markets, and one that allows us to participate in the ownership of great companies (i.e. via the equity markets) and to lend our own capital to help fund other companies (i.e. the bond markets).

The way I see it, we have no choice but to exercise our minds, and to use our rational faculties to sustain our lives. Now, any particular individual certainly can abdicate this responsibility, but that doesn’t change the fact that his or her survival will still depend on another person’s reason applied to the challenge of survival.

And it is in this effort that we should accept nothing less than full victory for ourselves, for our families and for our society. And it is this mindset that, for me, is the takeaway to ponder each June 6, D-Day.

If you want to find out more about how I apply the “accept nothing less than full victory” mindset in my newsletter advisory services, then I invite you to check my Successful Investing, Intelligence Report and Fast Money Alert advisory services today.

The wisdom of the Founding Fathers never ceases to amaze me. Yes, I love these men and their insights, especially the homespun proclamations of Ben Franklin. You see, the race against time is the only battle we all are destined to lose. Yet knowing this can be a beautifully liberating notion. The way I see it, knowing life is finite means I must make the most of every second. It also means I have but a short time to make a positive impact on others — and that’s what I try to do every week in this publication, and in all my writing and in all my human interactions. Reality deserves nothing less.