How To Make A Small Fortune

Do you know how to make a small fortune in auto racing?

You start with a big fortune.

This apropos adage is certainly one that amateur, semi-pro and even professional auto racing team owners discover very quickly, and that’s because when it comes to a costly venture, few things add up as fast as motorsports.

Now, the reason this subject is forefront in my mind today is because over the weekend, I attended my favorite event of the year, the Long Beach Grand Prix. This year’s event was particularly special for me, because the 2020 race was canceled due to the pandemic.

Then the 2021 event was supposed to take place in April, but it was postponed five months, also due to the pandemic. So, after a wait of about 17 months since the 2019 race, I finally got to be up close and personal with some of the greatest drivers, teams and motorsports technology in the world. They combined to provide thrilling moments not just for me but for fans around the globe.

Interestingly, my friend who attended the race weekend with me made an astute observation that sparked the idea for this week’s issue. Here’s what he told me:

“Jim, the racing business sort of seems like what you do. The team owners pour money into their people and products in pursuit of victory. And when it comes to investing, we put money into companies in pursuit of winning by growing our money.”

I thought about this observation for a few minutes, and then I came to the conclusion that my friend was partially on track (pun intended). You see, in some ways auto racing is similar to investing, but in other ways, it’s very far from it. Let me explain.

Like auto racing, investors want to win. And like auto racing, investors have to take risks to come out with a victory. If you want to win the Long Beach Grand Prix, you can’t just safely negotiate the 1.968 mile, 11-turn road course. Instead, you have to push, push, push all the way through, and you have to do each lap in about 70 seconds (the track record is 1:07.5511, set by Josef Newgarden in 2018).

And if you want to win in your portfolio, sometimes you have to push things along by buying high-momentum stocks and out-of-the-money call options on those stocks in pursuit of really fast gains, like the way we do in my Bullseye Stock Trader advisory service. 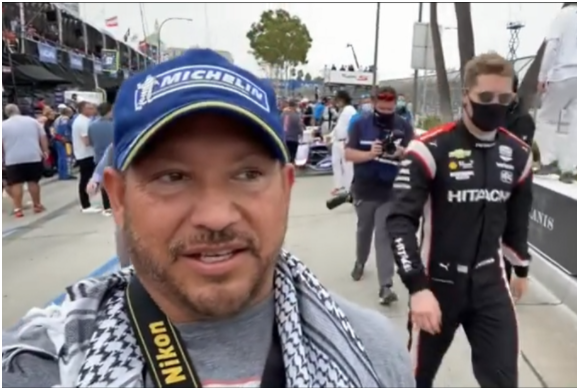 Your editor standing near track record holder Joseph Newgarden before the 2021 race.

Yet unlike auto racing, when we put our money into a company, our winning comes in the form of more money.

You see, in auto racing, and particularly in the amateur and semi-pro ranks, but also largely in the professional ranks, the money you put into the venture doesn’t come back to you multiplied the way a good investment does. Sure, you might win a trophy, and it might be really fun, exhilarating and satisfying, but it’s going to cost you a whole lot of capital.

Another way to frame this for contrast is that unlike auto racing, investing doesn’t take a big fortune to make a small fortune. Instead, when you invest, you can take that small fortune and turn it into a really big fortune.

And when it comes to investing, there’s no time like the present to go out on the track and test your driving skills.

So, ladies and gentlemen… start your engines!

This article is the second in a series exploring equal-weight ETFs.

The market uncertainty and volatility can cause concern among investors, but they may want to turn to equal-weight exchange-traded funds (ETFs).

The benefit of an equal-weighted ETF, such as First Trust Nasdaq-100 Equal Weighted Index Fund (NASDAQGM: QQEW), is that it acts as a bit of a buffer against a market downturn in any one sector. Unlike a market-cap weighted ETF, wherein a specific sector or company can make up much of the fund, the companies and sectors that comprise an equal-weighted ETF such as QQEW are all favored equally, with no bearing on their market capitalization or size.

As an equal-weighted fund, QQEW may be of interest to investors looking to diversify into non-financial sectors. This fund provides equal-weighted exposure to the Nasdaq 100, which is a tech-focused index comprised of 100 of the largest domestic and international non-financial companies listed on the Nasdaq, based on market capitalization.

This fund is rebalanced quarterly to help provide equal allocation to all its components without any sector or market-capitalization favoritism. QQEW’s equal-weighted approach helps to mitigate some of the impact from the Nasdaq 100’s heavy-tech weighting. However, the index’s top holdings are led by two technology giants, Apple Inc. (NASDAQ: AAPL) and Microsoft Corp. (NASDAQ: MSFT), followed by global retailer Amazon.com Inc. (NASDAQ: AMZN).

QQEW has an expense ratio of 0.58%, a 0.12% distribution yield and $1.35 billion in assets under management. Further, it pays a quarterly dividend of $0.15. As the fund is an amalgamation of various sectors, all of equal weight, it is not surprising that it is a reflection of 2020’s market turmoil. 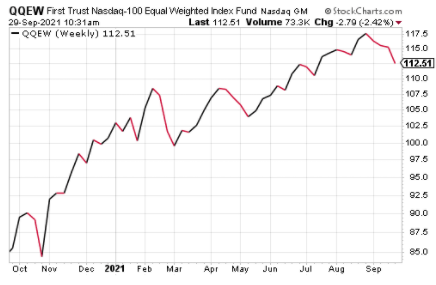 Overall, the Trust Nasdaq-100 Equal Weighted Index Fund (NASDAQGM: QQEW) may be a reasonable modification to the Nasdaq 100 for investors interested in a purer exposure to the non-financial sectors with less concentration in technology. It may also be of interest for investors looking to build a long-term or retirement portfolio, as opposed to traders interested in quick liquidity.

However, this equal-weighted ETF may not be appropriate for all portfolios, and investors are encouraged to conduct their own due diligence to determine whether this fund aligns with their investing goals.

Evergrande and the False Equivalence Fallacy

The big buzz in markets over the past several days, and particularly during Monday’s approximately 2% tumble nearly across the board, has been over what many are calling a potential “China Lehman Moment.”

Those of us in the markets in 2008 remember quite well the real “Lehman Moment,” because that is when the financial giant declared bankruptcy due chiefly to massive mortgage-based derivative defaults. That bankruptcy ushered in the financial crisis and the subsequent tanking of financial markets worldwide, along with the global economy.

Well, in China, that nation’s second-largest property developer, Evergrande, is thought to be ready to default on its massive debt payments. In fact, Evergrande already alerted banks that it would be unable to meet existing debt obligations. Last week, that prompted a huge drop in the Chinese real estate sector.

Over the weekend, investors around the world considered the potential contagion from the Evergrande situation (along with a handful of other unknowns such as Fed policy, tax hikes, the debt ceiling debate and earnings warnings), and on Monday morning, the markets went into serious risk-off mode.

Now, over the past week or so I have read many articles about Evergrande that basically argued that if the company defaults on its debt, that will pose a systemic risk to the Chinese economy, and that it could potentially be China’s very own Lehman moment. Because of this risk, and due to China’s significance to the global economy, investors took the cautious route on Monday and de-risked nearly across the board.

And while that de-risking is certainly understandable, I think equating Evergrande with Lehman Brothers is an example of what philosophers call the “false equivalence fallacy.”

The false equivalence fallacy occurs when a uniformity is drawn between two subjects based on flawed or false reasoning. This fallacy also is known as a fallacy of inconsistency. Another more common way of elucidating the fallacy of false equivalence is via the cliché “comparing apples and oranges.”

I think one of the best ways to think about China is that it’s a country, but it operates like a company. Yes, there are ostensibly “private banks” in China. And yes, there are “private corporations.” Yet, in the end, the Communist Party owns anything and everything, if it so chooses. Indeed, that government risk is one of the inherent dangers when investing in China.

Because of the Chinese government’s heavy hand in the nation’s industry, its leaders also are very likely to backstop Evergrande and restructure that entity’s debt and/or just pay out the debt. You see, it’s because of this governmental backstop that Evergrande and Lehman are a case of false equivalence.

Of course, I don’t mean to be dismissive here, as $303 billion of liabilities is catastrophic for most banks. But again, these banks aren’t truly private — at least, not like they are in the United States or in Europe. And while Western governments are hesitant to provide taxpayer support to bail out banks (we didn’t in the case of Lehman), in China it’s simply something that will be done to support the property market.

The fact is that the only way this would be a global systemic problem is if Western banks were on the hook for Evergrande’s debts (which they’re not). Moreover, the fact that Western banks were actually on the hook for defaulted Asian debt in the late 1990s is what prompted the appropriately named “Asian debt crisis.” That was a case of foreign money, leveraged hedge funds and banks that stood to lose big, and not a case of the Chinese government taking a loss.

So, despite concerns over the Evergrande debt issues, that matter remains largely an internal Chinese problem, and one that the Chinese government is likely to ameliorate.

Therefore, when it comes to Evergrande and Lehman, I want you to be a good philosopher and avoid the false equivalence fallacy. Or, more colloquially, don’t mix up your apples and oranges. One is for making pies, the other is for making screwdrivers.

“If you’re in control, you’re not going fast enough.”

Indianapolis 500 winner, team owner and racing legend Parnelli Jones knew that to really push the envelope, you have to be just a little bit out of control. This is a profound lesson in life, because if you want to break free of the ordinary, you often have to intentionally get a little bit out of control and attempt the extraordinary. Remember this the next time you do anything.