Sometimes life vaults us to heavenly heights and sometimes we are brought down to earth by the banalities of bureaucracy.

Last week, I had the privilege of celebrating freedom alongside some 2,000 of my fellow liberty lovers at this year’s FreedomFest conference. This week, I was brought back to the reality of invasive government and its irritating intrusion into all of our lives.

Let’s start with last week, as it was a glorious experience that is worthy of remembrance while it remains at the forefront of my mind. For four days, I listened, spoke with, gave presentations to, and dined with many of the liberty movement’s brightest luminaries.

I also enjoyed some very in-depth conversations with those that I interviewed for my podcast, Way of the Renaissance Man. In fact, this year my team helped me outdo even last year’s bountiful production, as I recorded 16 new podcast episodes for the upcoming Season Two of the lifestyle, idea and personal empowerment show. 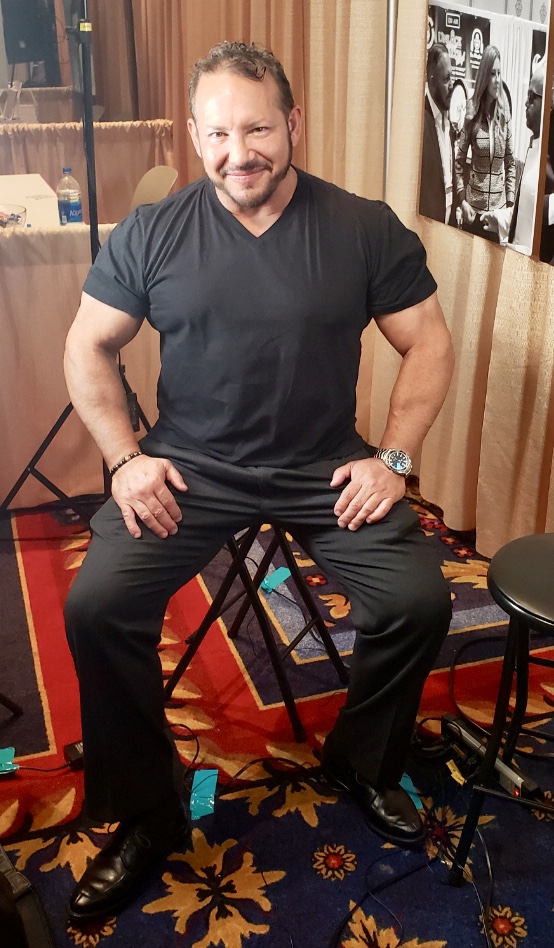 On the set of the Way of the Renaissance Man podcast.

I also would like to thank my production staff, producer extraordinaire Heather Wagenhals of Unlock Your Wealth TV and Emmy-Award-winning master sound engineer Michael Terry. I also want to thank my colleagues at Eagle Financial Publishing for helping to promote my newsletters, including Paul Dykewicz, John Phillips, Roger Michalski, Ned Piplovic, Hilary Kramer and of course, Dr. Skousen.

It’s funny how much spiritual and intellectual fuel one can drink down over the course of a few days. To me, there is nothing more exhilarating and life-affirming than basking in the intellectual pursuits that promote what could be deemed the master value: liberty.

Ironically, a mere 36 hours after the final toast was raised at the FreedomFest gala on Saturday night, I found myself in a less-than celebratory line awaiting the state sanction of my driving privileges.

In California, the agency is called the Department of Motor Vehicles or DMV. And even though I had an appointment, which I had to book approximately six weeks in advance, I still had to wait a couple of hours to fill out the paperwork that takes less than seven minutes to process.

Normally, I would simply renew my license via mail and pay the requisite booty that is levied by the state leviathan. Yet this time, my visit required an in-person validation, as I had to get what’s called a “Real ID.” This is an ID that government requires that you possess if you want to board a commercial domestic flight. The rule goes into effect on October 1, 2020, so at least I am more than a year ahead of the curve on this one.

Still, as a small “l” libertarian, the idea of getting the state’s permission to travel around the country via airplane just roils me. Shouldn’t my right to travel be up to me and the airline I choose to pay for my trip? Of course it should, but apparently, the powers that be in the California state government weren’t very influenced by the kind of ideas I was reveling in at FreedomFest.

Too bad, because I am convinced that a good dose of rational thought, delivered in an entertaining and persuasive way like I saw at FreedomFest, might just make a few of those in power question the need for invasive paperwork, intruding fees and the usurpation of citizens’ time.

And while I am under no illusion that the bureaucrats in charge of California’s state agencies and its state government are about to do an about face and embrace the freedom that I witnessed last week, I do think that a little taste of liberty sprinkled about wherever and whenever possible is a good start to nudging the world in a positive direction.

As I’ve said many times, the only antidotes to bad ideas are good ideas and there are no better ideas to promulgate than freedom, liberty and the pursuit of one’s own rational values.

That is what I will always do in this publication, in my newsletters and via my podcast. Because the only thing more important than being a champion for liberty is, well… nothing.

ETF Talk: Dip into Industrials with this ETF

XLI is considered to be a broad sector measure of industrial stocks. The index includes companies in aerospace and defense, industrial conglomerates, marine, transportation infrastructure, machinery, road and rail, air freight and the logistics and commercial services and supplies industries. The fund selects from the S&P 500, with limited exposure to small- and mid-cap stocks, which only account for a small fraction of its holdings.

Another crucial factor in the industrial sector resides on the trade front, especially with China. After a supposed trade truce was reached between the United States and China, U.S. officials are traveling to China next week at the start of a six-week congressional recess to continue their lengthy trade negotiations.

The truce may have had a somewhat positive effect on XLI’s share price, as it’s up 1.51% in the past month. A recent ETF Channel analysis claims XLI’s share price has about a 7% upside and could reach as high as $83.92 in the next 12 months. XLI currently is up more than 21% year to date, as you can see in the chart below. 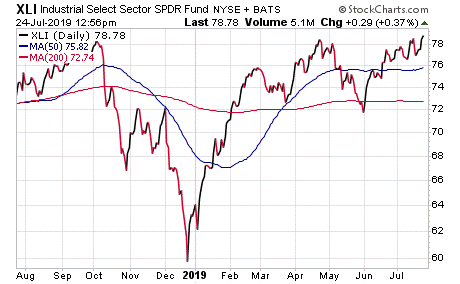 The Industrial Select Sector SPDR Fund (NYSEARCA: XLI) currently has a 1.99% yield that pays out a quarterly dividend of $0.337. Its ex-dividend date is Sept. 20.

As Free as You Want to Be

“Freedom is not something that anybody can be given. Freedom is something people take, and people are as free as they want to be.”
— James Baldwin

The novelist, essayist, playwright, poet and social critic knew that if you want to live the way you want, you have to get in there and really fight for it. And what, I ask you, is a more worthy value to fight for than freedom and liberty?