The EU’s Doublespeak on Big Tech

The EU’s Doublespeak on Big Tech

The European Union just announced a big plan to promote technology and fund artificial intelligence (AI) research. According to a just-released report, “Shaping Europe’s Digital Future,” the European Commission is embarking on a plan to promote technology companies and make Europe similar to Silicon Valley and China when it comes to high-tech appeal.

In an op-ed accompanying the report, President of the European Commission Ursula von der Leyen wrote the following warm-and-fuzzy description of the plan:

“We believe that the digital transformation can power our economies and help us find European solutions to global challenges. We believe citizens should be empowered to make better decisions based on insights gleaned from non-personal data. And we want that data to be available to all — whether public or private, big or small, start-up or giant. This will help society as a whole to get the most out of innovation and competition and ensure that we all benefit from a digital dividend. This digital Europe should reflect the best of Europe — open, fair, diverse, democratic and confident.”

Sound good to you? Well, maybe. But whenever I see the words, “society as a whole,” and “open, diverse and democratic” in a government proposal, I immediately think of the dystopian proclamations depicted in George Orwell’s 1984.

And to be quite blunt, my take on the language of this proposal is what Orwell called “doublespeak.”

I say that because, when I dug into the admittedly sparse details of the proposal to promote this digital transformation, I saw that at the crux of this plan is the virtual defenestration of the ownership of personal data by the likes of Facebook (FB), Amazon.com (AMZN), Alphabet (GOOGL), Netflix (NFLX), Apple (AAPL) and other big-data companies.

The EU commission wants to introduce a rule that would prevent tech giants from imposing conditions for accessing and using their data. In essence, the proposal here is to make these companies provide access to their data to virtually everyone, thereby collectivizing the ownership of their product. That’s basically telling these companies that if they want to do business here, they’ll need to give up the one thing that is most valuable to their business, i.e. their user database and its detailed information.

That’s like telling The New York Times that it is allowed to sell its newspaper in Europe, as long as European Commission regulators have complete editorial control over the content.

And speaking of content, the EU plan further compounds the potential damage to these big data companies by setting up rules that would require these tech giants to take more responsibility for the content on their platforms. That means social media companies will need to follow the EU’s rules when it comes to policing content posted on platforms such as Facebook, Google, YouTube, etc.

Of course, the debate about policing social media platforms isn’t just a European proposition. Indeed, the desire to regulate what’s on social media is popular here in the United States and it is being endorsed (wrongly, in my opinion) by both sides of the mainstream political aisle. Each wants to impose government control, but each wants those controls placed on their opponents and not on themselves.

In my view, this doublespeak EU regulatory language is not a positive for tech companies, no matter how much money is pledged by the EU to help cultivate a digital transformation of the region.

My suggestion to the EU would be that if you want to foster a true digital transformation, one where citizens can benefit the most from the greatest minds and greatest inventions in human history, then try out this one-word digital transformation plan that’s the only truely proven promoter of prosperity the world has ever known… capitalism.

P.S. If you want to hear me discuss this issue further, check out my appearance this morning on the TD Ameritrade Network, with my friend and host Nicole Petallides.

Financial technology, or fintech, is a relatively new and growing part of the market.

It features interesting companies that transform the way in which we engage in transactions, as well as how financial processes are handled on a business-to-business level. One way to gain exposure to this theme is through the actively managed exchange-traded fund ARK Fintech Innovation ETF (ARKF).

This fund seeks to be on the cutting edge of new technology in this space. According to ARK Invest, fintech innovation companies include those involved in transaction innovations, blockchain technology, risk transformation, frictionless funding platforms, customer-facing platforms and new intermediaries, among other areas.

All these themes, of course, have the potential to create hugely profitable ventures. While the blockchain craze has largely died down, there still are companies that are legitimately engaged with the technology as a source of profit.

Financial technology may be a more interesting theme than companies that have, as was popular a few years ago, simply appended “blockchain” to their names to attract investors. The largest position in this fund by far is Square Inc. (SQ), the maker of small card readers for small businesses. The company’s technology has become ubiquitous over the past few years, and shareholders have profited handsomely.

This fund is up by about 20% over the last year. It currently trades at a small premium to net asset value (NAV), as usual, and has an expense ratio of 0.75%. With assets under management of just $83 million, this fund falls below my recommended threshold for investment, but its strategy is an interesting one that merits bringing to your attention. As you can see below, ARKF has powered upward since October, leaving its moving averages in the dust. 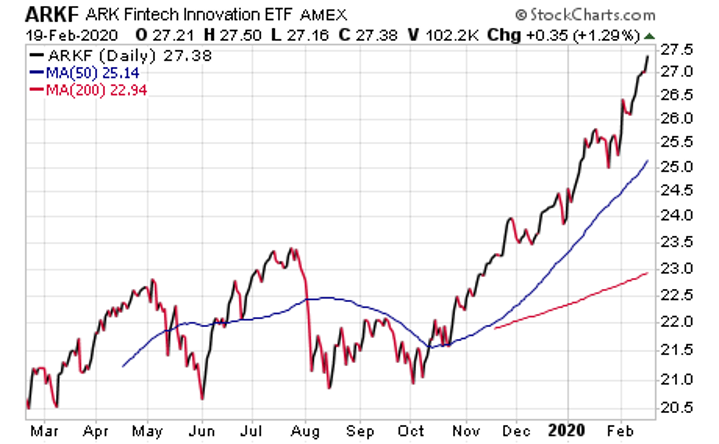 New investment themes for investors to consider are always interesting. If you believe that the frontier of fintech is a promising source of further upside, ARK Fintech Innovation ETF (ARKF) may be a fund worth considering for possible investment.

Keeping America Safe from the Taxing Hand of Big Government

A big part of becoming a Renaissance Man is living your life in focus and with a commitment to your productive purpose. And when it comes to living a life of focused purpose, there is perhaps no better example than anti-tax warrior Grover Norquist.

As president of Americans for Tax Reform, Grover and his organization have been the intellectual point of the spear when it comes to opposing any and all tax increases.

In the new episode of the Way of the Renaissance Man podcast, you’ll learn about Grover’s successes on this front since the last time we spoke about a year ago. You’ll also hear his thoughts on the issue of tariffs, why we both agree they are so destructive and why they’re a form of economic self-destruction. 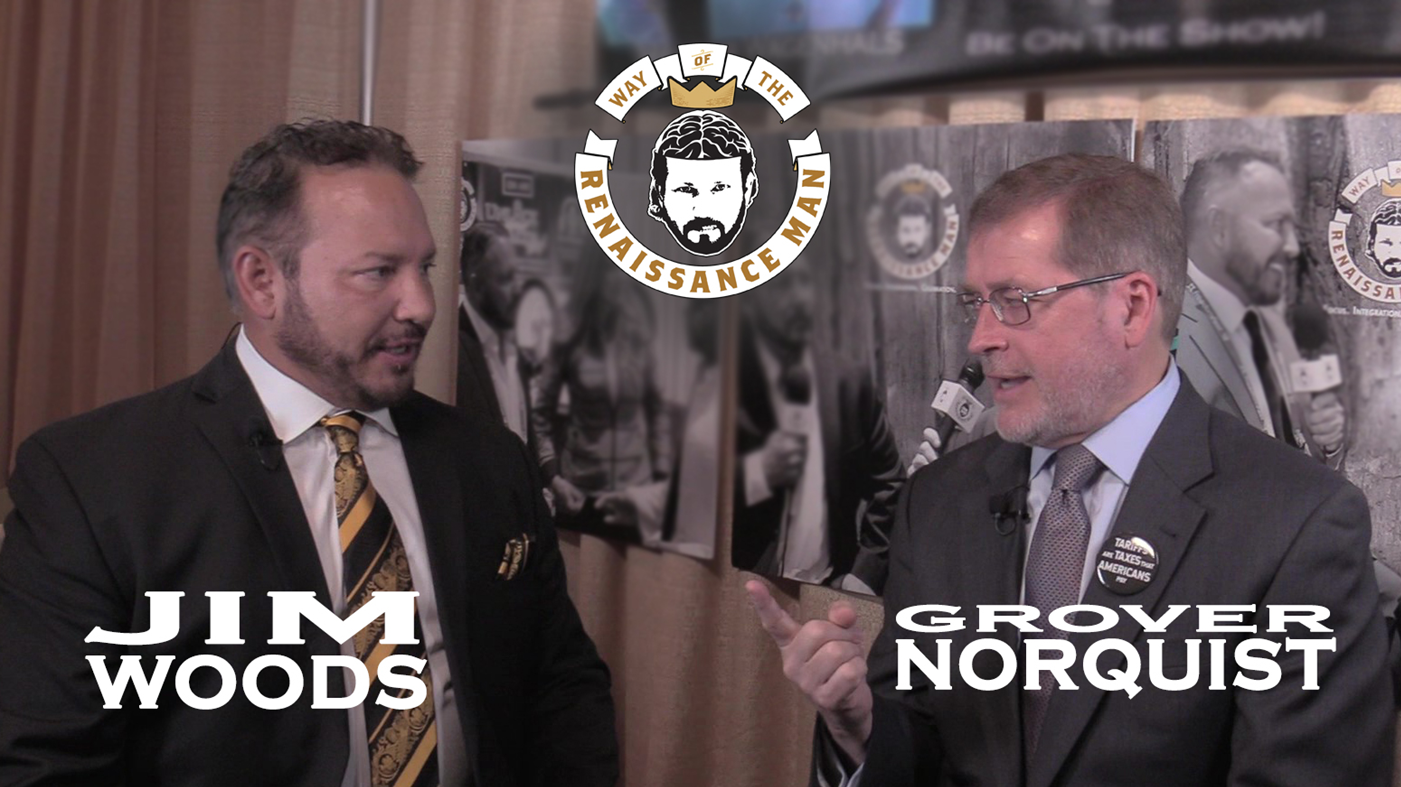 The conversation continues with a discussion of the current contentious climate in Washington, the nature of bureaucracy and the true essence of the so-called “deep state.”

Plus, Grover games the 2020 presidential contest, including his theory on why the race really comes down to just three battleground states. He also updates us on his adventures in stand-up comedy, his “frenemy” relationship with comedian Bill Maher and the state of the liberty movement.

If you want to hear a discussion between two men focused on their respective productive purposes, then this episode is perfect for you.

The Best Fan Mail Ever

Some writers get fan mail. And if you’re a good writer who says something of significance with a strong point of view, you also get hate mail.

The way I see it, if you’re not getting a mix of both, then you probably don’t stand for much of anything at all.

Yet sometimes, you get fan mail that’s accompanied by a gift — a gift that touches your heart and makes you feel like what you do matters.

The gift I am referring to here is one I received from a reader in Argentina, who had just bought copies of the new Spanish translation of my favorite novel, Ayn Rand’s Atlas Shrugged. 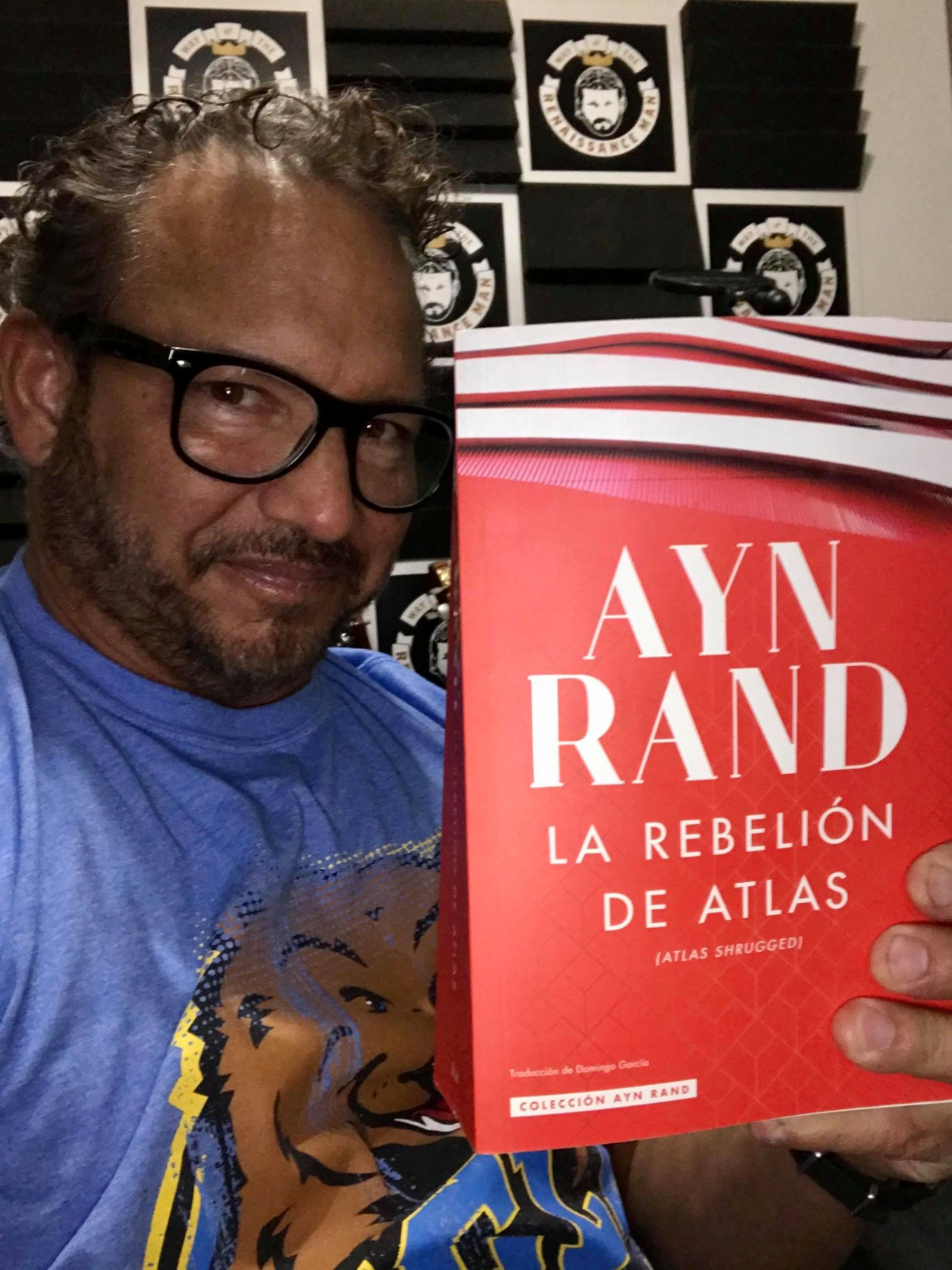 La Rebelión De Atlas is undeniably one of the greatest literary works ever, but it’s much more than that. The novel contains the essence of Rand’s ideas, a philosophic system that integrates metaphysics, epistemology, ethics, politics, aesthetics — and which does so in a brilliantly constructed, page-turning plot that has one identifying, rooting for, and wanting to emulate the rational heroes.

If you haven’t read Atlas Shrugged, then I highly recommend doing so.

Whether you read it in English, Spanish, or in one of the dozen other languages it’s been translated into, or if you listen to the audio version (I recommend the Scott Brick narrated version), your life will be greatly enhanced by the experience.

Oh, and to that fan who sent me this copy (you know who you are), well, know that you just greatly enhanced my life experience.

For that I shall be forever grateful.