Champing at the Bitcoin

Publisher’s Note: Are you looking for a great holiday gift? We were going through some areas of our office and found a box of beautiful rose pendants that were widely popular a few years ago. These are 24K gold and pure silver — a hard combination to find in any jewelry store. Click here now to learn more about these elegant pendants and put a big smile on a special person’s face this holiday season! But hurry, we only have 78 of these!

Champing at the Bitcoin

When you make your living by knowing the answers to investors’ questions, you better be prepared. And, though one individual cannot be expected to know every detail about every company and every specialized subsector of the market, the broad scope of the investment landscape means investment professionals are forced to cultivate quasi-encyclopedic knowledge of all sorts of subjects.

I confronted this situation recently when I appeared at our Post-Election Investment Summit in Las Vegas. It was there that I was asked a series of great questions about one of the hottest topics in the market today — Bitcoin.

Now, because I am a small “l” libertarian, and an advocate of laissez-faire capitalism (the sort of capitalism that almost entirely divorces the economy from government), I know about what Bitcoin and the other cryptocurrencies promise. That promise is we won’t need to contend with the fiat policies of the Federal Reserve, the European Central Bank or any quasi-government or government agency when it comes to the disposition of our medium of exchange.

And while Bitcoin and other cryptocurrencies are, at this point, still far from that libertarian promise, from a purely speculator and trader’s perspective, fast-money momentum traders are champing at the bit to get in, and out, of Bitcoin.

This affinity for traders to get into Bitcoin should come as no surprise, especially when you consider the price action over the past several years. The chart of Bitcoin below is from the go-to cryptocurrency website CoinDesk and shows the tremendous upside, as well as the gut-wrenching volatility, in the price of the cryptocurrency over its lifetime (from July 18, 2010, to the present). 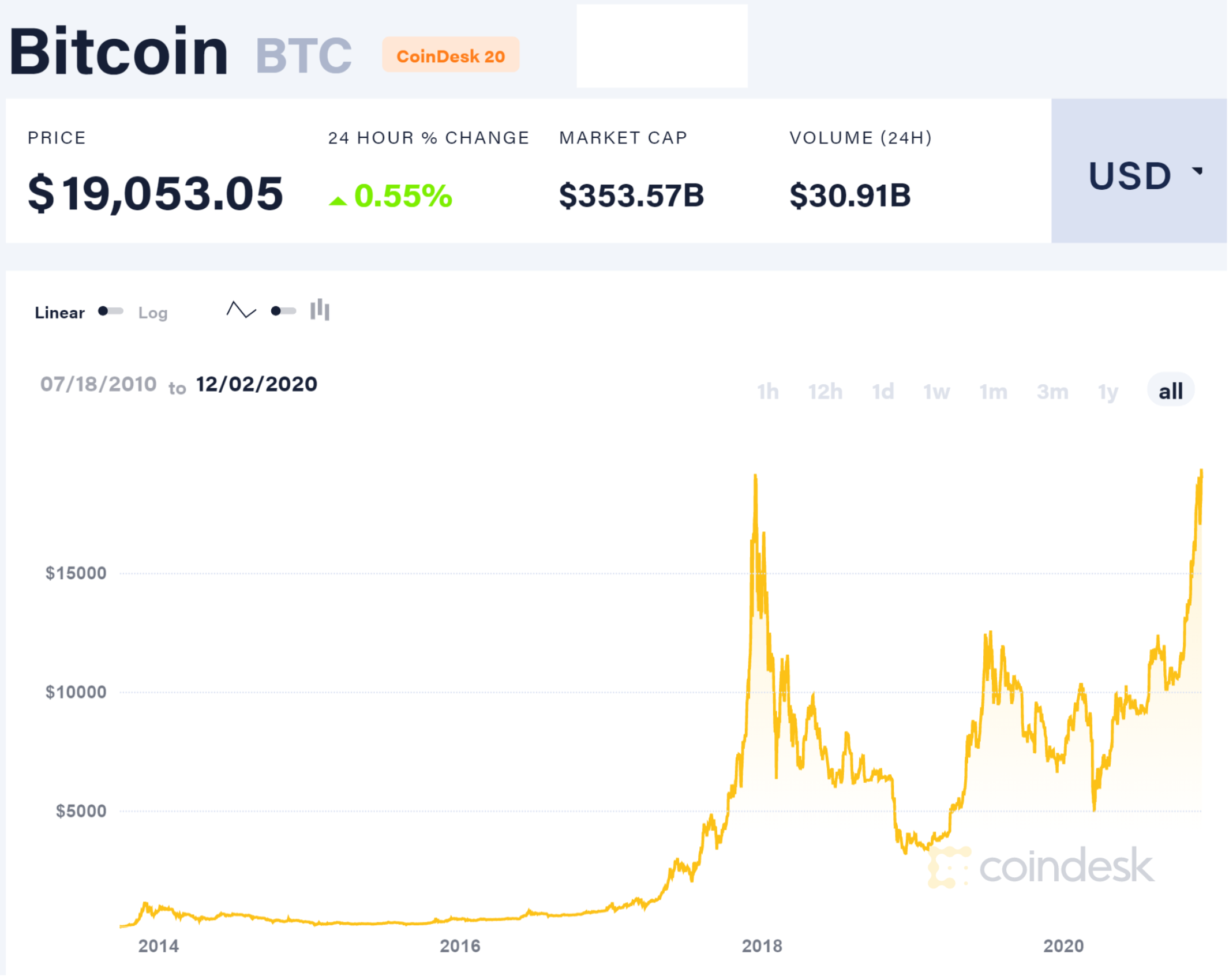 It is gains of that sort that prompt investor questions about what Bitcoin is, how it works and how to buy it — questions of the sort I fielded from attendees of the Post-Election Investor Summit. Today, I am going to answer some of the most common Bitcoin-related investor questions for you. And to do just that, I have enlisted the help of my friend and macro-analyst extraordinaire, Tom Essaye of Sevens Report Research, whose recent work on cryptocurrencies has added to my knowledge of this rather complex subject.

The most obvious question when it comes to Bitcoin is the basic one: What the heck is Bitcoin?

The short answer is that Bitcoin is a digital currency, which, unlike fiat currency, is created, used and distributed electronically via a decentralized ledger system known as a blockchain. Because Bitcoin is decentralized and resides on a peer-to-peer network, no single institution or person controls it. This makes it different from a currency, such as the U.S. dollar or the euro, which are both controlled by central banks. Bitcoins also cannot be “printed,” and their amount is finite, as only 21 million Bitcoins can ever be created. Bitcoins also are often stored online in what is called a “digital wallet.”

“Bitcoin is unlike a conventional stock, bond, commodity, or fiat currency. In fact, the decentralized and non-traditional nature of Bitcoin is what draws many people to its siren’s call,” said Tom Essaye.

“These investors want to own something that isn’t tied to the whims of government or to some shady corporate oversight. As we have seen with the 2020 election, there is a subset of society with a growing mistrust in many aspects of these cornerstone institutions. That distrust is likely driving a great deal of the recent momentum in Bitcoin as its price has exploded in conjunction with the election fervor,” added Tom.

One very interesting thing I discovered about Bitcoin is that, unlike what the claims of many of its proponents state, Bitcoin is not a safe-haven investment like gold or Treasury bonds. Research from the Kansas City Federal Reserve on the price of 10-Year Treasuries, gold and Bitcoin during periods of stress and no-stress between January 1995 and February 2020 show the correlation of these assets during these periods.

The table from the Kansas City Federal Reserve report below shows that “Both the 10-Year Treasury and gold have negative, statistically significant correlations with the S&P 500, suggesting both assets have the properties of safe havens. In contrast, Bitcoin has a weak positive correlation with the S&P 500 during periods of financial stress, suggesting Bitcoin behaves more like a risk asset than a safe haven.”

So, if you are looking to Bitcoin as a safe haven in the way gold and Treasury bonds have traditionally behaved, then forget it. The better way to look at Bitcoin as an investor is to see it as a risk asset, and a very risky risk asset at that. Yes, you can make a lot of money if you time your Bitcoin entry and exit right, but don’t be fooled into thinking you’re adding some non-correlated, risk-asset diversification to your holdings. The numbers simply do not bear out that conclusion.

Now, that caveat aside, what’s the best way to buy and own Bitcoin as an individual investor?

Well, there are two primary ways. First, you can buy direct ownership in a Bitcoin through an exchange such as Coinbase or eToro. These platforms make it easy for investors to create a digital wallet, transfer in assets and convert those assets to cryptocurrencies — for a trading commission or percentage fee. This is the purest form of ownership, because the holder obtains direct access to the Bitcoin and can make decisions on how it is stored or traded.

The other way, which I think is the much easier way, is to own the Grayscale Bitcoin Trust (GBTC). This unique exchange-traded fund (ETF) was originally launched in 2013 as a private placement for accredited investors to own Bitcoin that was held in a trust. It has since progressed to attain the status of a Securities and Exchange Commission (SEC) reporting company that is available for public trading.

“The premise of GBTC is similar to how the SPDR Gold Shares (GLD) owns and tracks the price of gold,” said Essaye, “It’s setup to offer titled, auditable ownership through a public investment vehicle that holds the coins in ‘cold storage’ or offline. Every share of ownership in GBTC is equal to a fraction of a Bitcoin.”

Owning Bitcoin via GBTC also is easy, from a logistics standpoint, because you can buy it on any platform that you buy stocks and ETFs on. Simply log in to your brokerage account, put in the ticker symbol GBTC and buy the number of shares you want. And when you want to sell, just repeat the process with your sell orders.

Finally, one thing to keep in mind here is that GBTC can trade at a premium or discount to the actual price of Bitcoin. As Tom’s research revealed, GBTC has swayed between a premium as high as 41% and as low as 3% over the last 52 weeks. The premium, as of yesterday, Dec. 1, was 30.2%.

So, for investors who are looking for big momentum trading vehicles, GBTC and/or straight-up Bitcoin is certainly where you’ll find a lot of action. Just beware of the downside that can befall you on any given day, as this volatile asset class requires the ability to take profits quickly and to mitigate losses even more quickly.

There are some companies that can reasonably be expected to have their fortunes rise with the upcoming political agenda, regardless of whether the Democrats gain control of the Senate.

One issue that often gains bipartisan support is infrastructure spending, and one way to capitalize on that potential trend is through Global X U.S. Infrastructure Development ETF (PAVE). Indeed, PAVE is a market-cap-weighted fund that invests in the biggest names in U.S. infrastructure, so any increase in such spending by the federal government is sure to benefit these companies.

Construction, transportation and engineering are all industries that fall into this larger theme. The fund is focused primarily on U.S. companies, including ones that are involved in the production of raw materials and heavy equipment.

PAVE is up about 16% year to date. Its performance in the last few months has been particularly strong and may appeal to momentum investors. Assets under management currently total $661 million, and the expense ratio is 0.47%, which is approximately covered by the 0.45% dividend yield. 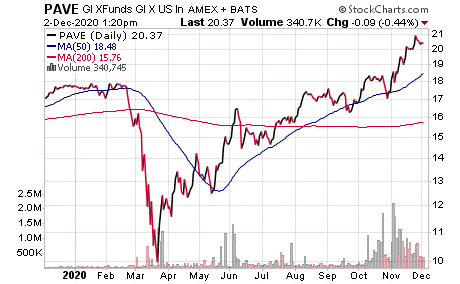 PAVE trades at a small premium to net asset value. The fund lets investors buy and sell a broad basket of U.S. equities involved in infrastructure projects, while gaining the tax efficiency of doing so though a single investment.

For investors looking to play in the infrastructure space as the next administration begins work in Washington on Jan. 20, Global X U.S. Infrastructure Development ETF (PAVE) is one of the more popular and liquid ETF options out there.

Audio Essay: A Revealing Plane Ride with the President-Elect

What’s it like to take a cross-country plane ride with now President-elect Joe Biden?

In this special audio essay, I read my 2008 article, “We All Scream for Ice Cream: A Joe Biden Tale.” This is a piece I wrote that details my impressions of the then-senator after I sat next to him on an airplane for nearly six hours. I also add a new introduction to the essay to put it in its current and proper context. 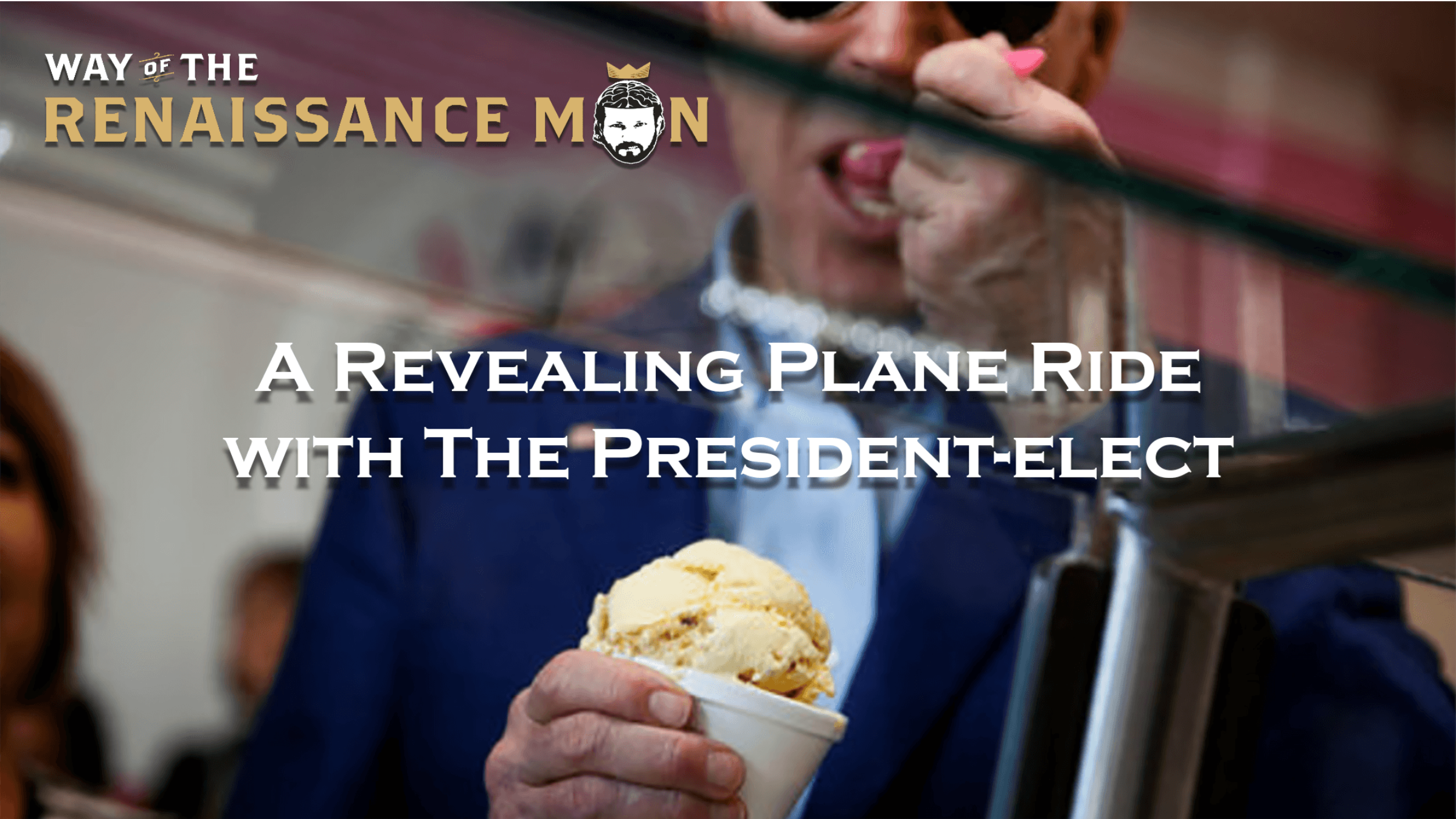 Interestingly, what I found out about the man while doing just that is sure to make you pause, and make you laugh out loud.

If you want to find out more about one very peculiar habit of our next president, then this special audio essay is for you.

The Time Coin of Life

“Time is the coin of your life. It is the only coin you have, and only you can determine how it will be spent. Be careful lest you let other people spend it for you.”

The older we get, the more we realize that time is precious. Sure, money matters, as does one’s career, productive achievement, family, friends, etc. But, as we age, we are increasingly aware that we only have so much time to devote to these important things.

So, why waste any of your time on the things that really don’t matter that much, or that you have little influence over? Put in investment terms, why waste your time betting on donkeys when you can place your bets on only the best thoroughbreds? Remember, life is too fleeting to misallocate your “time coin.”