All of a sudden, the market is volatile… but why?

That was one of the main topics of conversation I had with investors over the past couple of days at the Las Vegas MoneyShow. In fact, I fielded a lot of questions about why stocks wobbled last week, and that’s completely understandable.

Fortunately, I was well-equipped to answer these questions. You see, when it comes to understanding the underlying reasons why markets behave as they do, you have to think a bit deeper than just the headlines.

Indeed, that’s why I call this publication “The Deep Woods,” because it is here that we peel back the surface layers of the onion skin so that we can get deep into the real reasons why things are as they are. In doing so, we can get a much greater sense of where things might likely go in the future. That’s because when you have a good sense of why things are the way they are, you have an even better chance of being right about how things are going to be in the future. And when it comes to our money, knowing what is likely to happen going forward is essential to investing success. 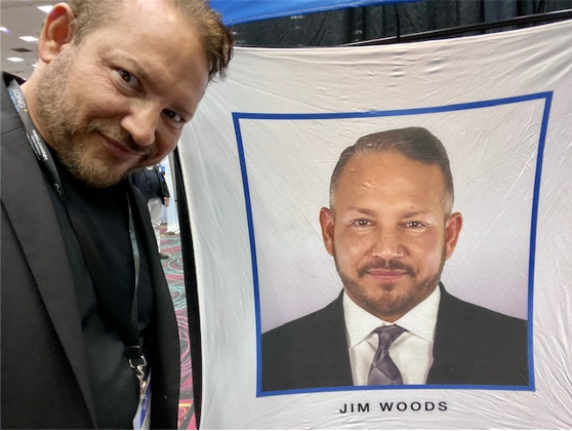 So, why did market volatility pick up last week? Well, first there were lingering concerns about the health of the economic recovery after the soft August jobs report and the increasing threat of a more “hawkish” shift at global central banks. Then there was a soft German ZEW Survey, which offset bullish Chinese export data. Politically, there was a Wall Street Journal article that warned corporate tax rates could rise before the end of the year, and that further pressured stocks.

Another reason for last week’s volatility and subsequent selling was that the Treasury Department said the federal government would hit the debt ceiling in October, which was sooner than previously thought. The market will soon have to deal with what is potentially another volatility-inspiring political battle over raising the debt ceiling.

And while I suspect the outcome here will be as it always is, i.e., yet another raising of the debt ceiling, there will be more volatility in markets as the battle on this issue in Washington rages. Finally, last week, stocks bounced around as derivatives trading continued to influence markets ahead of this week’s options and futures “quadruple witching” expiration.

So, last week we had 1) Confirmation of Fed and global central bank tapering, 2) Tax hike headlines, 3) Debt ceiling warnings and 4) A series of earnings warnings related to the COVID-19 spike and subsequent margin pressures.

Yet while all of these are legitimate headwinds, the first three issues we’ve known about for some time — it’s just now the market has to deal with them as they are all coming to a head (tapering, tax hike headline risk and debt ceiling drama). However, none of these got materially worse last week, it’s just investors can’t ignore them anymore as a future risk. But while these events will continue to cause volatility, they are unlikely to be bearish gamechangers unless there’s a major surprise (accelerated tapering, massive tax hikes or a debt ceiling breach).

The one headwind here that I am most concerned about is fundamental, and it is one that we have been watching closely and writing about every day in the “Eagle Eye Opener,” our daily “insider” market briefing designed to give you this type of market analysis in your inbox every morning at 8 a.m. Eastern.

That headwind is earnings, and last week, we saw numerous businesses from multiple industries (industrials, airlines, grocery stores) issue earnings warnings on a combination of reduced demand (airlines), supply chain issues (industrials) and margin compression (grocery stores). If expected earnings growth begins to suffer at the hands of inflation, supply chain issues or margin compression, then that is something more substantial we need to consider.

The following is an excerpt from the “Eagle Eye Opener” dated Sept. 13, and it explains in detail why earnings growth is so important to understanding what could happen in markets next.

Positively, a few earnings warnings don’t mean we’re going to see the overall EPS target for the S&P 500 materially cut. But this is a risk we need to watch closely, and you can be assured we will do just that.

In sum, the declines in stocks last week weren’t because the outlook turned materially worse, it did not. However, at these levels and these valuations the S&P 500 has essentially zero room for error. And as investors are forced to digest tapering headlines, tax hike threats, debt ceiling earnings and other issues, we should expect more volatility and the chance of a quick 5%-10% “air pocket” remains very real.

And with the help of this publication, and with the daily analysis subscribers get in the “Eagle Eye Opener,” we can help you focus on making sure you can quickly differentiate between market “noise” and real, legitimate bearish gamechangers as we move towards Q4 and into the year’s end — and what can be better than that?

ETF Talk: Get in on the Booming Tech Industry with This Fund

RYT provides broad coverage of large technology companies, but its equal-weighting skews it away from having a market-like portfolio. A pure market-cap benchmark would invest heavily in its top securities, which are the mega-caps in the tech industry.

Instead, RYT allocates only a fraction of its overall assets to its top 10 holdings. This produces sector tilts such as an overweight to semiconductors and an underweight to software and information technology (IT) services. The index is rebalanced on a quarterly basis.

RYT tracks an equal-weighted index of S&P 500 technology companies. The fund generally will invest at least 90% of its total assets in the securities that comprise the underlying index. The underlying index is composed of all the components of the S&P 500 Information Technology Index, which contains the common stocks of all companies included in the S&P 500 Index that are classified as members of the information technology services sector, as defined by the Global Industry Classification Standard (GICS). 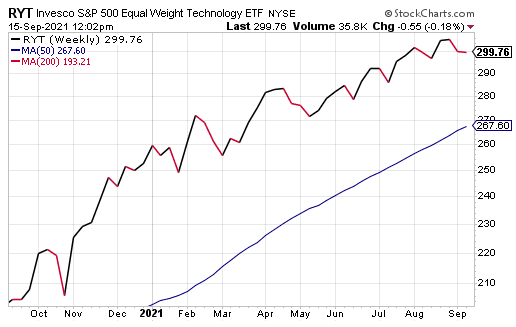 The fund has amassed $2.8 billion in assets under management and an average spread of 0.6%. Its expense ratio sits at 0.40%, meaning it is relatively inexpensive to hold in relation to other exchange-traded funds. It has 74 holdings overall and a nice 0.84% distribution yield.

As with any opportunity, I urge all potential investors to exercise their own due diligence in deciding whether this fund fits their individual portfolio goals.

There was a cat sleeping on my porch

She didn’t know what I had witnessed

The lacerated skyline of metropolis

A bleeding out of her twin sons

As the falling man descends to the concrete

To please a prophet on a white horse

Hatred of the good for being the good

Fury rises in the giant’s heart

Country targeted, let there be fight

There is a cat sleeping on my porch

While the world remembers

Last week, we marked the 20th anniversary of the attacks on September 11th, 2001.

And yet the passing of two decades hasn’t been enough to fade our scars. And for me, those scars will never be allowed to fade.

Etched on my personal black box are the memories I had circa 1999, when I checked in at the World Trade Center lobby to report to work at Morgan Stanley. The firm’s training program for advisers/traders took place in those Twin Towers, and in the weeks that followed I spent many an afternoon high atop the Manhattan skyline, learning the business inside the iconic monument erected to celebrate capitalism, Western achievement and the wealth of nations.

Their boldness, their glaring simplicity, their twin-brother like stance and their defiance of the rest of the New York City skyline was all part of the reason the World Trade Center was targeted for destruction by forces whose primary directive is death to the infidel. 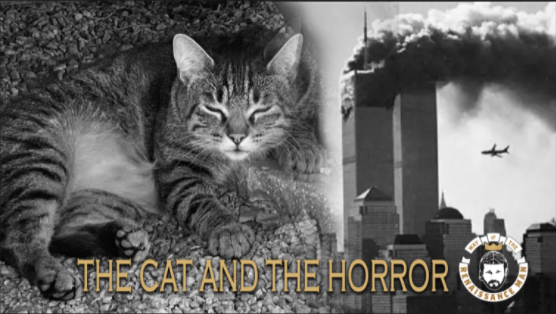 I still want to.

The scars of history must never be allowed to heal, and no salve of time should be permitted to mask the day America would be altered forever.

For a special audio essay of this article, follow this link: “The Cat and the Horror.”

“Sitting Alone is better than walking with the wrong people.”

What’s the secret to a happy life? Well, “happy” is different for everyone, but as humans, we generally share some basic characteristics and desires. Yet whatever our differences, there is one simple formula we can follow to enhance our existence.

First, we can look at our interactions with others as a way for both participants to win, and not as a way for one party to defeat the other. Second, we should look to laugh along with everyone, and not laugh at anyone. Finally, we can employ the wisdom of former president of India, rocket scientist, writer and Renaissance Man, A.P.J. Abdul Kalam, by choosing to surround ourselves with the right people, and by not engaging in futile relationships with the wrong people. Do these three things and watch your life improve immediately.