Fear of an Inverted Planet

Fear of an Inverted Planet

Stocks are getting hit hard, and on Wednesday, the major averages were down big.

At one point in the session, the Dow was down more than 700 points. Interestingly, just one day before, stocks were up huge on some much-needed improvement on the United States-China trade front.

So, why did stocks dive after the positive trade news yesterday? The answer is simple: a yield curve inversion. 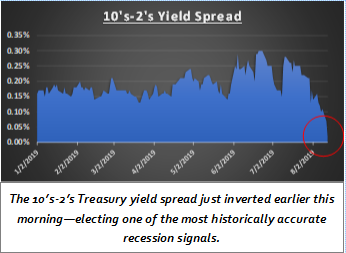 I have been writing about the yield curve and the likelihood of an inversion in the 10s-2s spread in my Successful Investing and Intelligence Report advisory services over the past year or so, as the fear of an inverted planet (i.e. a world where you get more yield for a short-term loan than you do for taking on the risk of a longer-term loan) is a blaring warning beacon that global growth is about to get ugly.

The bigger fear here, is over recession, as historically a yield curve inversion in the 10s-2s precedes an official recession in the economy, although we don’t usually see it in the data for at least six months or more.

“Recessions are, honestly, arbitrary periods of time that are determined by the National Bureau of Economic Analysis long after the recession has started and, in some cases, ended,” said Tom Essaye of the Sevens Report. As veteran readers of my work will recognize, Tom is my friend and go-to macro analyst. He also happens to be one of the best in the business.

“While the inversion is certainly a disconcerting signal over the medium and longer term, it’s not a signal to necessarily sell stocks right now, because a lot can happen between now and six months or more,” said Essaye.

True enough, although I know it can be hard to see stocks down nearly 3.0% across the board in a single session, not to mention the sea of red you are likely looking at on your computer screens when you check your portfolios.

Finally, it has become fashionable these days for some pundits to claim that the inverted yield curve is something not to worry about. In fact, just this morning I heard a pundit on financial news TV say, “This is not your father’s yield curve.”

The implication here is “this time it’s different,” and that there isn’t anything to really worry about because the reasons for past yield curve inversions (the Federal Reserve taking money out of the system and driving rates on the short end higher) are not the same as the reason for this yield curve inversion (expectations of the Fed cutting rates on the short end over the course of the year).

Perhaps the most troubling thing here, in the fear of an inverted planet and the thing that is really causing the decline in the 10-year Treasury yield, is the fact that interest rates around the world are so low and, in many cases, they are negative. That means you buy a 10-year bond from many countries in Europe or Japan, and you must pay them for the privilege of loaning the money. Stated differently, that means you don’t get any interest, you have to pay them for the privilege of holding your money for 10 years. So, even though the 10-year Treasury note is paying just under 1.6% here, 1.6% is better than paying someone 0.6% to hold your money for you — and that is what’s driving money into U.S. Treasury bonds, and driving the yield on those bonds lower (remember, bond prices are inverse to bond yields).

Yes, it’s an inverted, upside down world, but it’s the one we must navigate properly if we are going to make our money work for us. And that is what this publication, as well as my newsletter advisory services, help readers do each week.

ETF Talk: This Technology ETF Offers a Path to the Future

The Technology Select Sector SPDR Fund (NYSEARCA: XLK) is an exchange-traded fund that can give a prospective investor access to the segment of the global economy that is involved with technology.

Specifically, XLK tracks the Technology Select Sector Index, which, in turn, attempts to provide an effective representation of the technology and telecom sector of the S&P 500 Index. It would, however, be a mistake to assume that this fund’s holdings are only confined to the big-name FAANG stocks of Facebook (NASDAQ:FB), Apple (NASDAQ:AAPL), Amazon (NASDAQ:AMZN), Netflix (NASDAQ:NFLX) and Google’s parent Alphabet (NASDAQ:GOOG).

While this ETF’s selection universe is entirely centered around American companies and avoids the less stable small-caps and most mid-caps in order to produce lower volatility and a rise in value, XLK’s portfolio indicates that the world of technology is still much bigger than FAANG would make it seem.

For instance, XLK includes financial payment processors and telecom firms alongside the FAANG and other top technology companies. This choice, among others, has helped make XLK one of the cheapest, most liquid and largest funds in its segment.

The fund currently has more than $21.46 billion in assets under management and an average spread of 0.01%. It also has an expense ratio of 0.13%, meaning that it is less expensive to hold than some other ETFs. 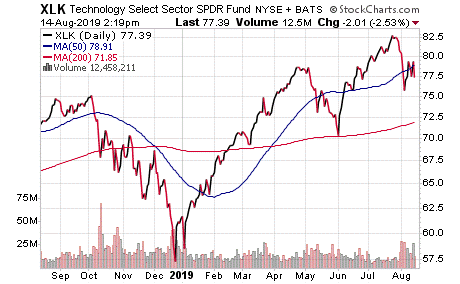 In short, while XLK does provide an investor with a chance to profit from the world of technology, the sector may not be appropriate for all portfolios. Thus, interested investors always should do their due diligence and decide whether the fund is suitable for their investing goals.

In the world of philosophy, those who achieve “rockstar” status are few and far between. Well, in the premier episode of Season 2 of the Way of the Renaissance Man podcast, I speak to a man who has become a public intellectual par excellence.

That man is Dr. Stephen Hicks, professor of Philosophy at Rockford University, and the executive director of the Center for Ethics and Entrepreneurship. He’s also a senior scholar at The Atlas Society.

Over the past year, Dr. Hicks has become well known in more than just academic circles. He has appeared on many podcasts and television shows. His work about postmodernism and its application to today’s cultural climate is just one of the many subjects that has vaulted him into the limelight. 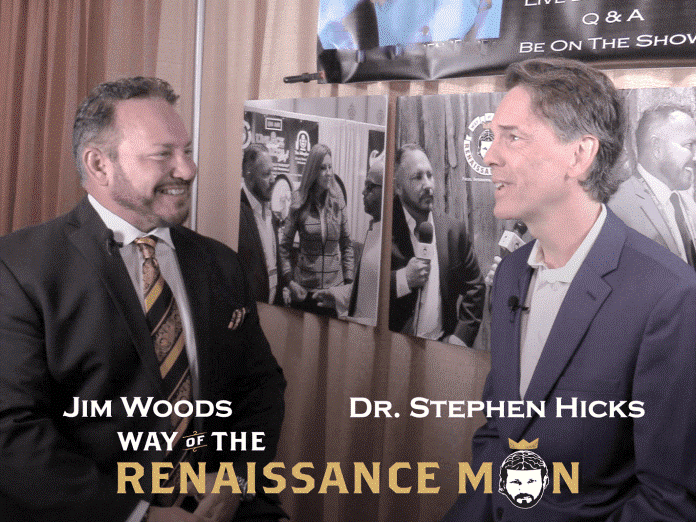 During our discussion, you’ll discover the importance of understanding postmodernism, as well as other pathological cultural movements. You’ll also learn why we agree that the only solution to bad ideas are good ideas.

The stakes are high, and the fight for a culture that respects individuals, freedom and rationality is a deadly serious enterprise.

Yet listening to this conversation, you might get the sense that Dr. Hicks and I are just two life-loving warriors on a mission to promote reason.

I hope you enjoy the premier episode of Season 2 of the Way of the Renaissance Man podcast as much as I did.

“The world is wrong side up. It needs to be turned upside down in order to be right side up.”

The world often seems like it could use a good turn upside down. And while we can’t turn the whole world around by ourselves, we can turn our world around by looking at it from a different vantage point. So, the next time you’re facing a difficult problem that you’re struggling to solve, try changing your perspective. It might not give you the answer, but it certainly will help you look at the question in a new, and perhaps more illuminating, way.